AB de Villiers won the Man of the Match award for his 37-ball 71 which kept Brisbane Heat in the fray for the Big Bash League knock-outs. (Photo Credit: Getty Images)

AB de Villiers put up a masterclass in batting as he blasted 71 off 37 balls to help Brisbane Heat stay in contention for the Big Bash League playoffs while Steve Smith's brilliant 66 outshone Aaron Finch's ton as Sydney Sixers kept Melbourne Renegades at the bottom of the table in an action-packed day on Saturday. de Villiers put up his best effort in a do-or-die game for Brisbane Heat while Smith showed his class in his first game in the Big Bash League for a long time. In the first game between Brisbane Heat and Melbourne Stars, Brisbane Heat chose to bat at the Melbourne Cricket Ground and it was Sam Heazlett who started aggressively with four boundaries before falling to Adam Zampa.

Ben Cutting blasted three fours off Nathan Coulter-Nile while Chris Lynn hit two boundaries off Dilbar Hussain as Brisbane Heat ended with 53 runs in the powerplay. However, Cutting fell to Sandeep Lamichhane and de Villiers started a bit slowly. Lynn welcomed Clint Hinchcliffe with a six but soon perished to Lamichhane as Brisbane Heat lost momentum. After 14 overs, de Villiers was on 13 from 16 balls and Brisbane Heat were 98/3.

That was when the carnage started. de Villiers launched Hinchcliffe for two sixes and a four as 18 runs came in the 15th over. Although Matt Renshaw fell to Zampa, the legspinner was hammered for another big six by de Villiers. The former South Africa batsman was now in big-hitting mode and he launched a six and a four off Glenn Maxwell to notch up his fifty off 28 balls. Marnus Labuschagne blasted two sixes off Hussain and de Villiers hit his sixth six as 20 runs came in the final over to finish on 186/5. 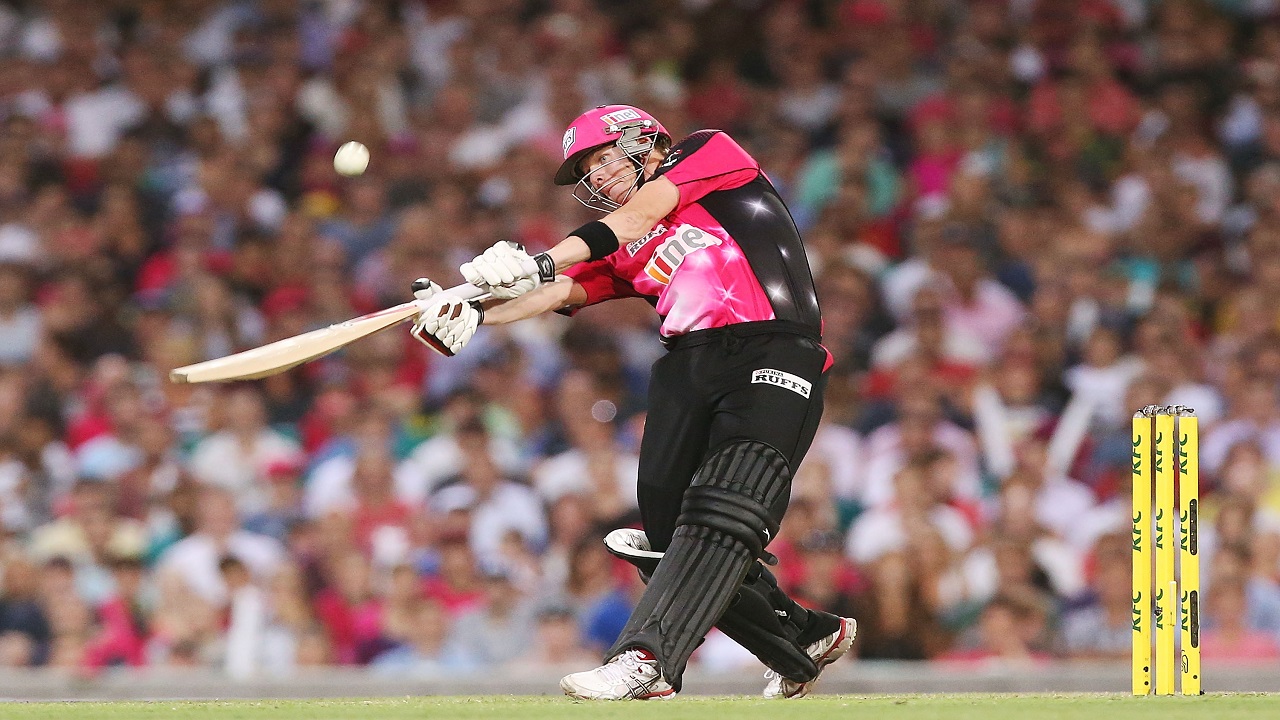 In response, Melbourne Stars did not get going and the spin duo of Mitchell Swepson and Mujeeb Ur Rahman took five wickets combined. At the top, James Pattinson took the wickets of Seb Gotch and Marcus Stoinis but it was Swepson who struck the big blows as he dismissed Maxwell, Nic Maddinson and Nick Larkin. Melbourne Stars' 71-run loss has resulted in serious loss of momentum heading into the knock-out stages.

Finch Slams Ton, But In Vain

Sydney Sixers took on the Melbourne Renegades from the Sydney Cricket Ground and the Sixers chose to bowl. Finch started with a boundary off Steve O'Keefe but Sydney Sixers did not make it easy for themselves when Ben Dwarshuis dropped Tom Cooper first ball off Josh Hazlewood. Cooper made them pay by smashing Hazlewood for two sixes and a four. Ton Curran, though, sent back Cooper but Finch continued on his merry ways by hammering Nathan Lyon for a six. Curran got his second wicket by sending back Nathan McSweeney but Sydney Sixers continued to be sloppy in the field when Jordan Silk dropped Finch off Lyon.

Finch notched up his fifty with two sixes off Lyon and in the death overs, he showed his class. Finch was dropped again by Dwarshuis off Curran and in the 17th over, Finch pummelled three fours and a six as 22 runs were conceded by Dwarshuis. Finch entered the 90s with a six off Hazlewood and he notched up his second Big Bash League century with a couple of Curran as Melbourne Renegades ended on 175/5.

In their chase of 176, James Vince started agggressively with a four and a six in the first over bowled by Samit Patel. His partner, Josh Philippe smashed two fours and a six off Christian. Although Vince was run-out, Steve Smith joined Philippe and the duo put Sydney Sixers on course. Philippe hit a six off Mohammad Nabi and he benefited from two dropped catches in one over bowled by Cameron Boyce. Philippe made the bowler pay by reaching his fifty with two fours and a six. At the other end, Smith rotated the strike and put in the hard strides as Sydney Sixers progressed smoothly. 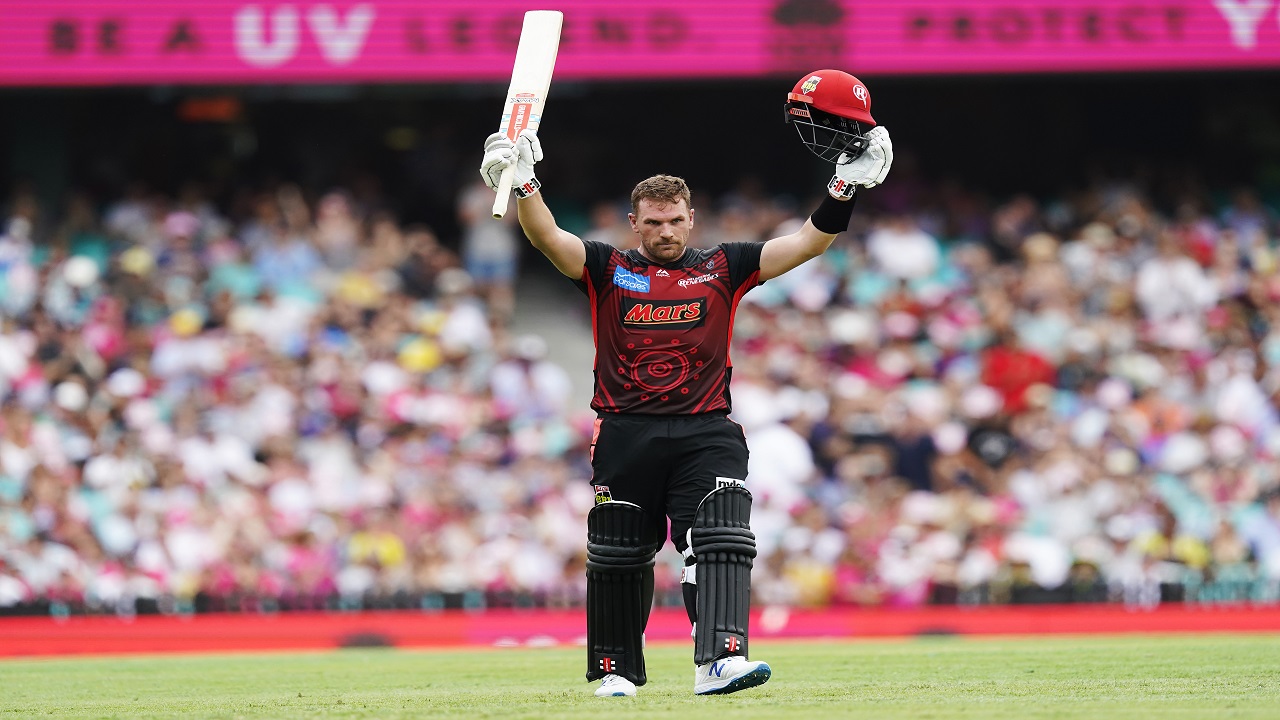 Aaron Finch blasted his second century in the Big Bash League but it fell in vain. (Image credit: Getty Images)

When Philippe fell for 61 off Nabi, Sydney Sixers were in a good position. Smith smashed two fours off Kane Richardson and he notched up his first fifty in the Big Bash League after six years with a reverse sweep off Boyce. With Sydney Sixers nearing a win, Smith went into aanother gear and launched Richardson over deep square leg for a big six and the win was completed with eight balls to spare.

With these results, Melbourne Stars and Sydney Sixers occupy the top two spots with Adelaide Strikers in third. However, the fight for the fourth and final spot has intensified with Perth Scorchers, Brisbane Heat, Hobart Hurricanes and Sydney Thunder all in the fray.