Shafiqullah Ghafari's 6/15 is the best figures by an Afghanistan bowler in the history of the Under-19 World Cup. (Photo Credit: Getty Images)

Rashid Khan. Mujeeb Ur Rahman. These are the two legspinners who have made their mark for Afghanistan on the world stage. On January 17, in the opening game of the ICC Cricket Under-19 World Cup, another Afghanistan legspinner made a massive statement which has pitch-forked him onto the world stage. 18-year-old Shafiqullah Ghafari put on an exhibition of bowling as his haul of 6/15, combined with fifties from Ibrahim Zadran and Imran Mir helped Afghanistan create a huge upset by beating South Africa at the Diamond Oval in Kimberley on Friday.

The opening game of the tournament has already witnessed a massive upset and Afghanistan's stock in world cricket continues to rise. South Africa chose to bat but they were made to pay when Fazal Haq removed Jonathan Bird with the third ball of the tournament. Things worsened for South Africa when Fazal uprooted the off stump of Andrew Louw for 2. It was left to Luke Beaufort and Bryce Parsons to rebuild the innings.

Beaufort and Parsons struck a boundary off Fazal Haq. Both batsmen grew in confidence and steadily found the boundary every over. In the 10th over bowled by Abdul Rahman, Parsons smashed four boundaries and the bowler conceded some extras as the over leaked 20 runs. Parsons neared his fifty but he misread a wrong-un from Noor Ahmed and the 58-run stand was broken when Parsons was caught for 40.

It was the turn for Ghafari to turn on the show. He dismissed Manje Levert and Jack Lees as South Africa tottered. When Noor Ahmad sent back Beaufort for 25, South Africa were in deep trouble. Ghafari got his third wicket when Khanya Cotani was undone by the googly. Tiaan van Vuuren was undone by the legbreak as Ghafari took his fourth wicket. Gerald Coetzee smashed two sixes off Noor Ahmad to take South Africa past 100. Coetzee took the attack to Afghanistan by smashing two fours off Fazal Haq. Ghafari took his fifth wicket when Achille Cloete was bowled for 3. 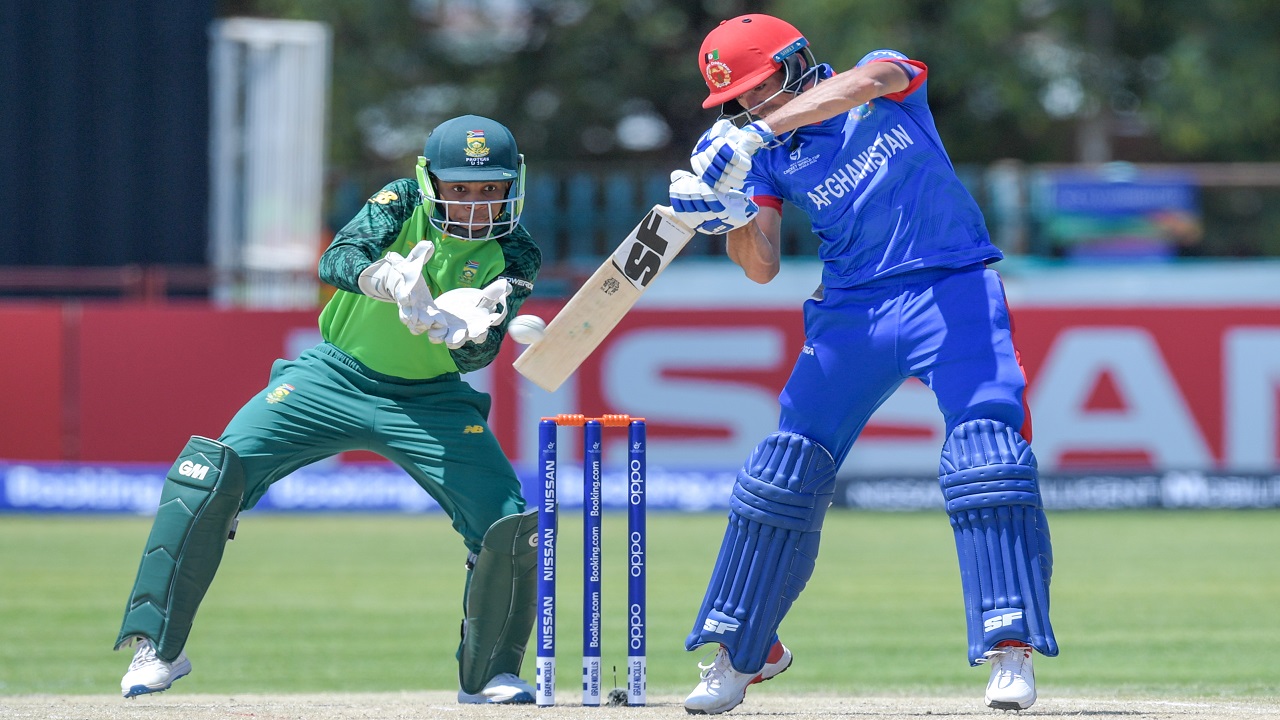 Cloete went all guns blazing as he smashed Noor Ahmad for a six and a four but Ghafari took his sixth wicket as he cleaned up Cloete with a legbreak. The figures of 6/15 became the best figures for an Afghanistan bowler in the Under-19 World Cup. In response, skipper Farhan Zakhil and Ibrahim Zadran, who has played two Tests for the Afghanistan senior team, started positively. Zadran smashed two boundaries off Cloete while Zakhil hit a four off Coetzee.

Afghanistan suffered a blow when Zakhil was dismissed by Cloete for 11 but Imran Mir, along with Zadran steadied the ship. Mir, in particular, was aggressive right from the very beginning as he blasted four boundaries off Mondli Khumalo. The fifty-run stand came when Mir smashed two boundaries off Cloete and he reached his fifty off 37 balls.

Tiaan van Vuurren ended the stand when Mir fell for 57 but the damage was done. Zadran also notched up his fifty with two fours off Bird and van Vuurren and the victory was sealed in the 25th over. Speaking after the match, Ghafari and the Afghanistan skipper said, "The plan was really simple. I just bowled wicket-to-wicket. It's a good start for me and my team. It's our first win against South Africa. Our bowlers bowled to the field and this is a good win. It's a good start for the tournament."