Ajinkya Rahane Held The Key For India As The Top Order Once Again Floundered Against The Discipline Of The New Zealand Bowlers As Kane Williamson's Side Were On Top In The Wellington Test.

Trent Boult smashed a quick 38 and took three wickets as New Zealand were on top in the Basin Reserve Test against India. (Photo Credit: Getty Images)

A wicket at the start of the day and a boundary by the end of the day. One would think that Indian cricket team enjoyed a dominant day 3 in Wellington. However, the story that unfolded at the Basin Reserve in between the two events was once again a familiar tale of failing for India. Kyle Jamieson and Trent Boult once again exposed India's inability to bowl the tail out cheaply as they smashed 123 runs to establish a massive lead of 183 runs. Mayank Agarwal started well and smashed a fifty but Trent Boult's three wickets, including that of Cheteshwar Pujara before the tea break and Virat Kohli with a short ball hurt India big time. Only Ajinkya Rahane stood firm as the Indian cricket team ended day 3 on 144/4, still trailing by 39 runs.

Jasprit Bumrah had given the ideal start for India when BJ Watling edged the bowler to Pant for 14. Ishant Sharma, India's best bowler on day 2, got the wicket of Tim Southee and it seemed the lead would not be so significant. However, that was when Kyle Jamieson, like he did with the bat in Auckland, changed the complexion of the game totally. Jamieson pulled a short ball from Mohammed Shami to the deep midwicket grassbanks for his first six and he countered the short ball well with a pull off Ishant to the leg side boundary.

Colin de Grandhomme joined in the fun by hitting Bumrah for two fours once the second new ball was taken and India did themselves no favours when Shami dropped Jamieson on 15. The six foot eight inch pacer continued to hurt Shami as he top-edged the pull shot but it sailed over fine leg for a six. In Ravichandran Ashwin's 23rd over, Jamieson was unleashed as he smoked two sixes in one over. However, Ashwin had his revenge when Jamieson top-edged a flighted delivery and Hanuma Vihari took the catch at widish mid on. Jamieson's knock created a new record as he equalled Michael Clarke's tally of hitting four sixes in his debut innings.

De Grandhomme looked good for a fifty but Ashwin struck again when he gloved a loopy ball that kicked up from the deck and Rishabh Pant took a good catch. India's misery though was far from over. Trent Boult decided to have fun as he smashed boundaries at will. Boult smashed two boundaries off Ishant and he slogged a lofted shot to long on for a six off Ashwin. Boult hit another four off Shami but in trying to be too aggressive, he top-edged a short ball by Ishant as the Delhi pacer, sleep-deprieved and having undergone a basic rehabilitation program, took his 11th five-wicket haul and his second at the Basin Reserve.

Mayank Agarwal got going with a couple of fours and Prithvi Shaw also looked in great touch but Trent Boult bowled the inswinger and Shaw jabbed at the delivery to square leg where Tom Latham took the catch. Cheteshwar Pujara tried to approach the match in the mould of how it worked for him in the past as he ground the New Zealand bowlers. Kane Williamson tried to rotate the bowlers and run-scoring did come down. Pujara was in awkward tangle as he fended at a short ball from Jamieson but the umpire did not give it out. New Zealand lost the review when replays were inconclusive as to whether the ball had hit the glove. Agarwal made solid progress and he neared a fifty with a six and a four off Ajaz Patel. 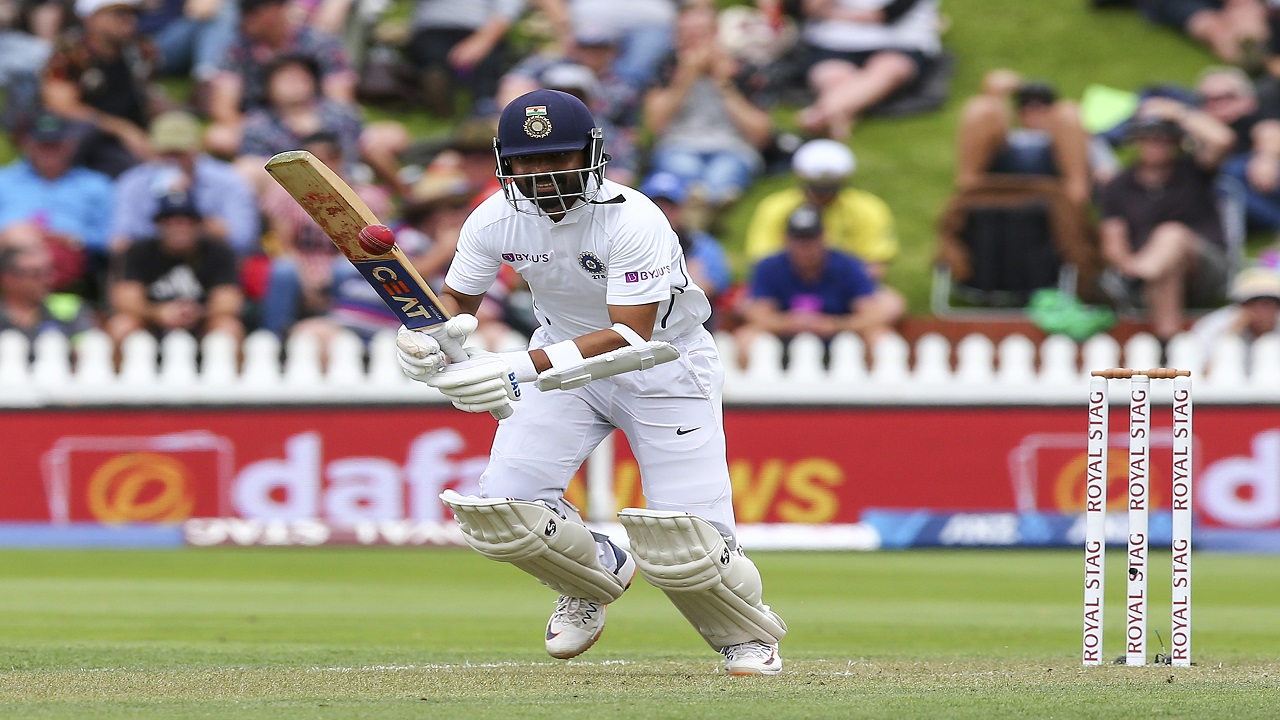 Agarwal notched up his fifty by glancing Patel to the fine leg fence but with the final ball of the session, Pujara's judgement short-circuited. Boult stayed round the wicket and got the full ball to curve back in late, Pujara left it on the angle but the ball cannoned into the off stump and India were once again dealt a body blow. Kohli started confidently but the well-set Agarwal went for 58 as he was strangled down the leg side with the DRS also not helping him. The wicket made Southee the first Kiwi bowler to take 300 wickets combined across formats at home.

Rahane got going with a couple of boundaries but Boult struck a massive blow when Kohli top-edged the hook shot and Watling took the catch to send the Indian skipper back for 19. Hanuma Vihari survived a LBW appeal as New Zealand lost their second review with the ball missing leg stump. Both batsmen ensured that there were no further hiccups. Rahane was hit on the helmet by Southee and he responded with two fours off Jamieson. Vihari ended the day with a four but India have a massive task to save the Test. They will have to do what Brendon McCullum and Watling did in 2014 if they are to avoid their first Test defeat in the ICC World Test Championships.