Under-19 World Cup: Australia Knock England Out Of Tournament In Last Ball Thriller

Australia Were Boosted By A Splendid All-round Performance From Connor Sully As They Knocked Out England From The Under-19 World Cup With A Splendid Two-wicket Win Off The Last Ball.

Connor Sully, the 19-year-old from Everton Park Queensland, had done his fair bit with the ball as he took 2/39 to restrict England to 252/7. In response, Australia were staring at elimination at 213/8 after 47 overs and they needed 40 off 18 balls. However, Sully decided to hurt England big time with the bat as he lofted three sixes and a four in the 48th over bowled by Blake Cullen. With 10 runs needed off the final over, Sully and his partner Todd Murphy held their nerve brilliantly. Murphy slammed a four and fittingly, it was Sully who scored the winning runs as Australia won by two wickets off the final ball to knock England out of the 2020 Under-19 World Cup at the Diamond Oval in Kimberley on Thursday.

Sully's all-round exploits once again highlighted the marquee contest that every England vs Australia cricket clash provides. After winning the Man of the Match award, Sully was quick to quote former India dasher Virender Sehwag's mantra of how he approached the final overs and he said, "I didn't talk much to him (batting partner) at all, just told him 'See the ball, hit the ball'." England, though, will be gutted by the one big over in the closing stages which changed the entire course of the match. The start that they got after Australia chose to bowl gave them a solid foundation for a big score.

Ben Charlesworth and Jordan Cox started aggressively, with Charlesworth smashing two boundaries off Bradley Simpson to signal his intent. Charlesworth neared his fifty with two fours off Sully but Murphy got the big breakthrough when he got rid of Cox for 25. Oliver Davies gor rid of Tom Clarke for 2 but Charlesworth reached his fifty. Jack Haynes and Chelresworth stitched a solid partnership and they targeted Tanveer Sangha with a couple of boundaries. Haynes benefited from a dropped catch from Sangha but the bowler had his revenge when he dismissed him for 31. 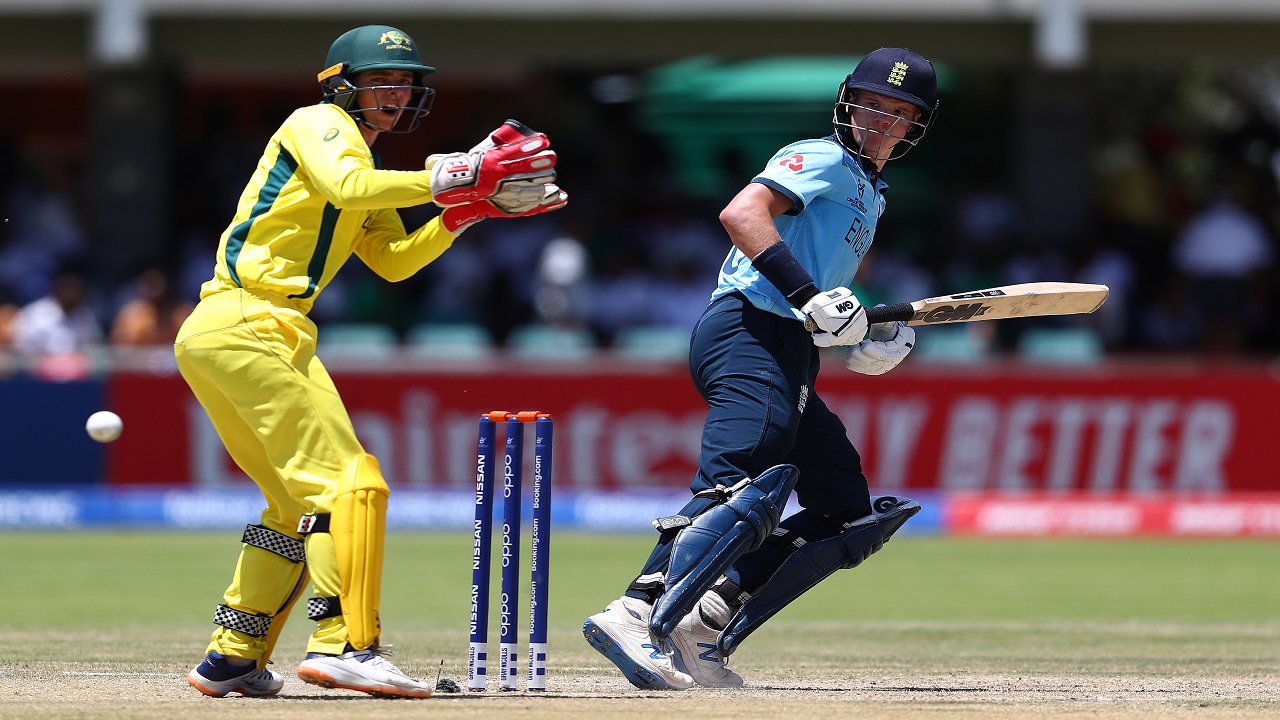 Ben Charlesworth was the top-scorer for England with 82 in their clash against Australia. (Image credit: Getty Images)

Australia got back into the contest with the wicket of Lewis Goldsworthy by Sully and the Queensland lad dismissed Charlesworth for 82. Dan Mousley and Joey Evison looked to revive the innings and Evison signalled his intention with a big six off Simpson while Mousley joined in with a six off Liam Scott. Australia, though chipped away but Mousley found the boundaries on a regular basis with Kasey Aldridge giving him good support. Aldridge and Mouseley cut loose in the last two overs with Mouseley bringing up his fifty with a big six off Simpson and England crossed 250 with the final over yielding 22 runs.

Harvey On The Charge

Australia stuttered at the start when George Balderson dismissed Jake Fraser-McGurk for 11 but Sam Fanning and skipper Mackenzie Harvey notched up a solid partnership. Just when Australia seemed to be on course, Aldridge sent back Fanning for 31 but Harvey was on the charge, launching some big sixes off the spinners. Harvey got good support from Lachlan Hearne and the 83-run stand put Australia firmly back on track.

However, towards the middle overs, Australia suffered a dramatic collapse. Harvey was cleaned up by Hamidullah Qadri for 65 and then Goldsworthy chipped in with the wickets of Hearne and Oliver Davies. Liam Scott fell to Qadri and when Patrick Rowe and Tanveer Sangha fell to Blake Cullen, Australia had lost six wickets for 53 runs. That was the moment when Sully decided to change the course of the match and knock England out of the contest in dramatic circumstances.