David Warner And Aaron Finch Blasted Their 18th And 16th ODI Centuries Respectively As Their Record Opening Stand Helped Australia Crush India By 10 Wickets In The First ODI At The Wankhede Stadium.

David Warner and Aaron Finch rewrote the record books in the first ODI against India at the Wankhede stadium on Tuesday. Warner blasted his 18th century, skipper Finch his 16th and they shared a record 258-run opening partnership which helped Australia crush India by 10 wickets and go 1-0 up in the series. The 258-run stand was a record partnership for any wicket in ODIs vs India, beating the previous mark of 242 between Steve Smith and George Bailey at Perth in 2016. They also notched up the best stand by an opening pair in the history of ODIs in this country. India suffered this 10-wicket defeat in a home ODI after 15 years, when South Africa hammered India by 10 wickets at the Eden Gardens. The loss at the Wankhede stadium extended India's winless run at the venue by nine years, having last won in October 2011 against England.

The bowling was taken to the cleaners by Finch and Warner. The Indian cricket team did not help themselves with a collapse of four wickets for 30 runs in the middle overs after a solid foundation by Shikhar Dhawan and KL Rahul. The lower middle-order failed to cope with the discipline of Mitchell Starc, Pat Cummins and toa certain extent, Ashton Agar and Adam Zampa. The bowling, led by Jasprit Bumrah and Mohammed Shami, proved to be incapable of dealing with two players who were on top of their game right from the very beginning.

Australia began the chase in grand style with Finch hitting the boundaries on a regular basis of both Shami and Bumrah. With the Australian skipper taking care of India's spearheads, Warner played a more cautious role at the very beginning. Warner was troubled by Shardul Thakur's swing in his first over and when he swung at a ball just down the leg side, India appealed and he was given out. Then came the game-changing moment.

With just one second remaining, Warner went for the review and replays showed no edge or spike on Real Time Snicko. Having received a big repreive, Warner became the fastest Australian to go past 5000 runs with a pull off Bumrah and he decimated Thakur's confidence in the eighth over when he blasted two fours and a six to help Australia end the powerplay in style with 84/0 after 10 overs.

Having negotiated the powerplay in style, there was some anxious moments for Finch. He got a leading edge to Kuldeep Yadav's first over but the ball landed safely at mid off. Under pressure, Finch slogged at a flighted delivery but the ball once again landed at short third man where there was no fielder. Warner and Finch neared their fifties with a six each off Jadeja and Kuldeep respectively. Warner was the first to get to his fifty and Finch, eager to not repeat the 2017 mistakes by getting dismissed by Kuldeep, took his time and notched up the milestone. The force was with Australia and even luck was on their side. Finch played inside the line to a flatter delivery and India opted for the LBW only for replays to confirm an inside edge. 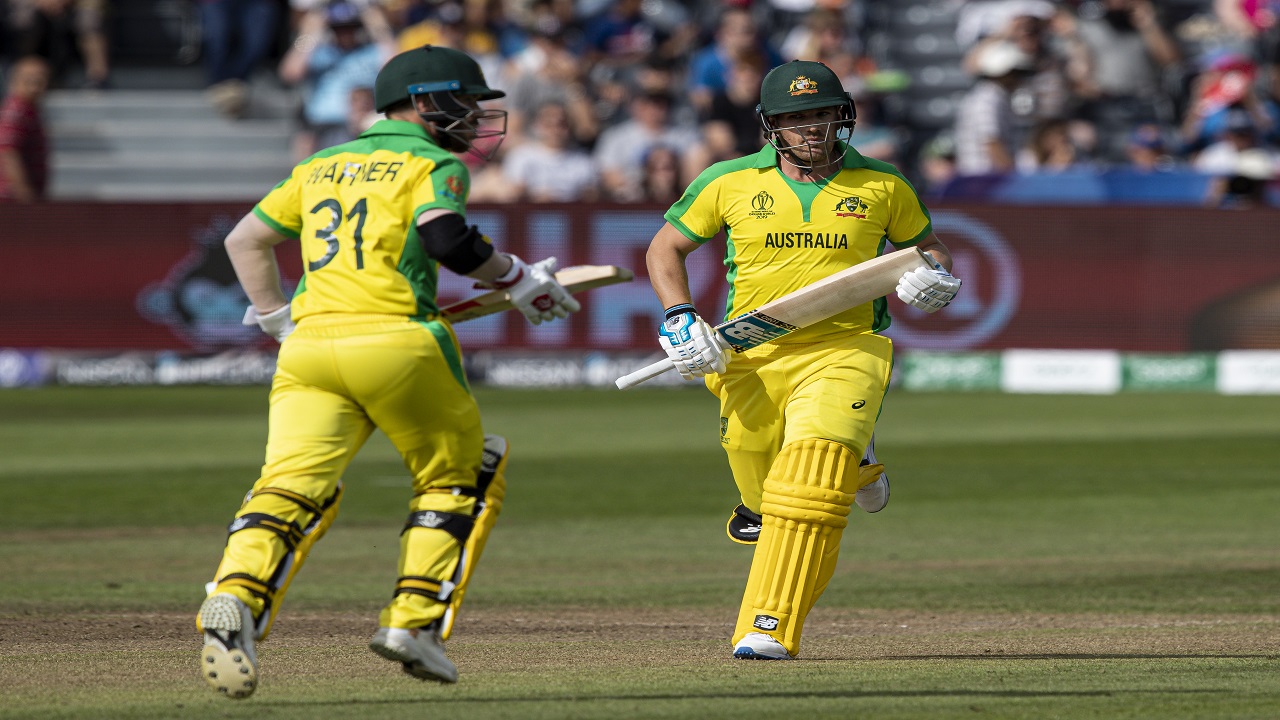 Aaron Finch and David Warner's stand was the best ever by any team in ODIs against India. (Image credit: Getty Images)

With the review lost, India had another massive shout against Finch but with no reviews left, the decision stood and Kohli could not believe it as he argued with the umpire and let out a shocked laugh. Shami and Bumrah tried their best to get the breakthrough but Finch and Warner were equal to the task. On 90, Warner was adjudged LBW by Jadeja but yet again, the review saved him with replays showing an inside edge. Warner nottched up his century by steering a short ball from Bumrah and the double century stand came up.

Finch entered the 90s with a six off Kuldeep and he notched up his century when he swept Jadeja to the fine leg fence. Warner ended the innings with two fours off Shami and it completed a demolition job from an Australian side on the upswing.

Australia chose to bowl and Rohit Sharma was dismissed for 10 by Mitchell Starc after hitting two boundaries in the very first over of the match. Dhawan looked in great touch and he was well-supported by KL Rahul as the duo stitched a solid partnership. After a sluggish start, Dhawan kept hitting boundaries at will and Rahul's confidence also grew. Dhawan survived a couple of yorkers from Starc in the eighth over but he turned the tables with two boundaries through the on side. Both batsmen rotated the strike and found the boundaries on a regular basis, with Dhawan launching Agar for a big six over deep midwicket.

The partnership had crossed 100 and India was well on course for a big score when another game-changing session took place. Rahul chipped a flighted delivery from Agar to short cover to fall for 47 and Dhawan fell for 74 when he got a leading edge to a good length delivery from Cummins that held it's line. Virat Kohli, who had demoted himself to No.4, slammed Adam Zampa for a big six but the legspinner had the last laugh, getting the Indian skipper caught and bowled and dismissing him for the fourth time. Shreyas Iyer was psychologically scarred by the bouncer from Starc and the next ball, he poked at a full length ball across. Four wickets for 30 runs had swung the momentum totally Australia's way.

Jadeja and Rishabh Pant tried to boost the innings, with Pant hitting Agar for a six and four to deep midwicket. Just as the dup strung a partnership, Kane Richardson dismissed Jadeja and Pant top-edged a bouncer from Cummins onto his helmet to be caught at point. The dismissal, though, saw him suffering a concussion which ruled him out of keeping in the Australia innings. Thakur, Shami and Kuldeep got India past 250 but it was a score well under-par.

This was Australia's fourth consecutive win in India and it was the second-highest successful chase in ODIs without losing a wicket. Kohli was visibly shell-shocked in the post-match presentation and India know that they have an uphill task to recover from this mauling ahead of the Rajkot game on Friday.