BCCI Has Written To The International Cricket Council Over The India Vs Pakistan 2019 Cricket World Cup And Has Urged Other Countries From Severing Ties With Countries From Which Terrorism Emanates.

In a major development, Rahul Johri, the CEO of the Board of Control for Cricket in India (BCCI) has written a letter to the ICC regarding the India vs Pakistan clash which will be played in Manchester on June 16. In a letter accessed by News Nation, Johri wrote a letter to Shashank Manohar, the ICC Independent Chairman, Dave Richardson, who is the outgoing ICC CEO, Colin Graves, the Managing Director of the England and Wales Cricket Board as well as ICC Cricket World Cup tournament director Steve Elworthy. In that, Johri mentioned that the BCCI is concerned for the safety of the players and the match officials in the match which has already seen about 400,000 ticket applications. The letter mentioned that the United Kingdom, the country which is hosting the ICC Cricket World Cup this time, has condemned the terror attacks in Pulwama which killed 40 CRPF jawans. Johri went one step further. Without naming Pakistan, he said ICC cricketing nations should sever ties with countries from where terrorism emanates.

In the wake of Pulwama Terror Attack earlier this month, the calls for boycotting Pakistan at the forthcoming ICC World Cup 2019 are peeking with each passing day. The pressure on the Board of Control for Cricket in India (BCCI) is increasing with each passing day. However, the government has warned the board to act wisely and not take any decision hurriedly as the decision can lead to India suffering.

As per the reports by NDTV, boycotting Pakistan clash in World Cup can draw a furious reaction from ICC and BCCI could be handed a ban by the international body. The Pulwama terror attack, which saw 40 CRPF soldiers attain martyrdom after a suicide bombing attack by Pakistan-based terror outfit Jaish-e-Mohammad, has evoked the emotions of millions across the country. A government source believes that if India boycotts the encounter against the men-in-green, it may lead to a ban for life for BCCI.

Shoaib Akhtar has condemned the death of 40 CRPF jawans in the Pulwama Terror Attack on 14th February and also suggested that team India has all right to pull out of the game against Pakistan in World Cup which is scheduled to be played on June 16. However, he did say that BCCI would want to participate in the clash against Pakistan eyeing monetary gains. 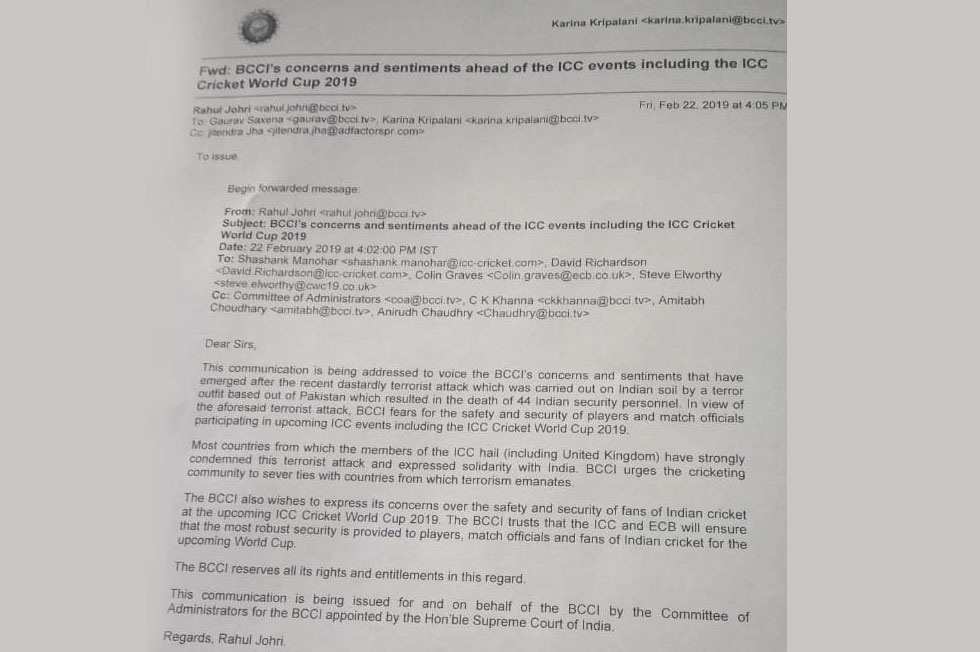 Akhtar, during a conversation with a Pakistani news channel, revealed that BCCI has expressed their urge at playing a bilateral series against Pakistan, but the Indian government has denied it every time. The Rawalpindi Express reckons that had India and Pakistan resumed their cricketing ties the broadcasters and BCCI would have earned the maximum money.

"Honest reply, BCCI wants to play with Pakistan, the government says no. Had they played with Pakistan, Star Sports and BCCI would have earned the maximum revenue. The series would have a monetary value of 600 million dollars. Do you think they don't? Of course, they want that. Now speaking on part of their argument, they want to play with Pakistan. Our Pakistan board had mentioned that they want to play a bilateral series and you cannot deny it although the series can be held at a different venue altogether. But they have said that they have a board to run which falls under Supreme Court. That is their argument and that is logical," opined Akhtar.