In India, we have this fascination to COMPARE. We compared Sunil Gavaskar to Sachin Tendulkar, Sachin Tendulkar to Virat Kohli, and now Prithvi Shaw is compared to Sachin Tendulkar. However, personally, a player is a product of the environment we inherit, the players he has around, the stadium and soil he is playing on, the coaches he has to give that pivotal advice, the bowlers he is facing, the batsman he is bowling, the bat size, and a lot more but even then we compare.

Given that they are arguably the two most iconic modern-day ODI batsmen, it was quite fitting that Kohli emulated Tendulkar in reaching the 10,000-run mark in style. Tendulkar had reached this landmark by scoring 139 against Australia in Indore in 2001; Kohli went past the landmark with an unbeaten 157 against West Indies in Visakhapatnam in India's previous home series.

If Visakhapatnam was a teaser, probably the Nagpur game against Australia was a blockbuster as Virat Kohli demolished the Aussie bowlers all around the ground and eventually went on to register his 40th ODI ton. Well, if we just rewind the clock back to the year 2013 - year when Sachin Tendulkar played his last International game against Windies at the iconic stadium Wankhede, Mumbai. And six years later, the player who has always seen as Sachin's replacement is just 9 centuries away to equal his record. With this, it is a good time to compare Kohli's current stats with Tendulkar's, at the time when former is closest ever to latter's record. 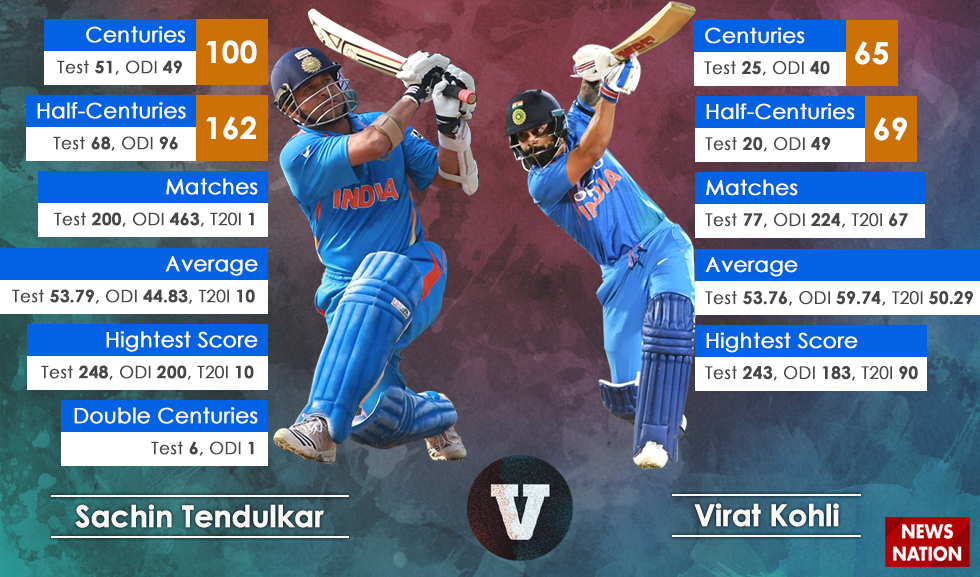 When looking at the stats in isolation, there's little doubt that Kohli bosses the numbers. In terms of innings to reach the 10,000-run mark, Virat is 21% better than Tendulkar; in terms of average and innings per century, he is 40% better; his strike rate advantage is relatively lower at 7%. Based on these 'numbers', there is no doubt that Virat is way ahead in the contest, but switching the table to Sachin's side, is it fair to compare Tendulkar's credibility on these numbers? - Probably No.

It's clear that ODIs are far more high-scoring now than they were when Tendulkar scored his first 10,000 runs; any comparison of numbers, will not be justifiable.

Virat Kohli, till now has racked up hundreds for fun in his International career, having registered 65 (40: ODI; 25: Tests) centuries so far. In case of Virat, it wouldn't be wrong to say that he has evolved as a player. From his initial days, to today, he has come a long way. He has not only worked on his skills but also on his fitness which has made him what he is today. For Sachin, it's a little different, his comparisons after a certain point of time in his career were with himself only. Sachin having 100 hundreds in the tank, the idea to come even close to this stat looked as a dream, but with Virat on 65, it feels 'even this is possible'.

How should a fan see them?

Well, the statistics comparison will go on and on. But to be honest, the two are born in different eras and have established their stature. Going forward, it's important to let Virat Kohli be Virat Kohli, and not let the number game take over him. If we let that happen, we will witness something which has been unreal. If you ask me, he will go way ahead of that landmark. Because as one has said, 'Leave me alone, I know what I am doing'.