Heartbreaking - Former NZ Bowler, Stuck Due To COVID-19, Seeks Crowdfunding To Be With Ailing Wife In England

Iain O'Brien, The Former New Zealand Pace Bowler Who Played 22 Tests From 2005 To 2009 For The Country, Is Desperate To Return Back To England From New Zealand As He Is Stuck Due To The Coronavirus Pandemic And His Rescheduling Of Flights Has Forced Him To Resort To Crowdfunding.

Iain O'Brien's wife Rosie has a lung condition which makes her vulnerable to the Coronavirus pandemic. (Photo Credit: Getty Images)

Iain O'Brien, the right-arm fast bowler who played 22 Tests for New Zealand from 2005 to 2009, was in the country a couple of weeks back to visit his parents. However, by the middle of March, the coronavirus pandemic suspended all international travel and stopped sporting activities all over the world. New Zealand, with 383 cases of the coronavirus so far, imposed a border lockdown and ordered all citizens coming from overseas to go into mandatory self quarantine. New Zealand also restricted international travel and this caused a massive problem for O'Brien.

The prime reason was O'Brien's wife Rosie is diagnosed with a lung condition which is very vulnerable in the times of the coronavirus pandemic. The 43-year-old had tried booking three flights, all of which were expensive but the airlines cancelled out. With very limited money, O'Brien had hoped to raise money by driving a truck or by doing other part-time jobs. However, with the control imposed by New Zealand to stop the spread of the coronavirus, O'Brien's options were limited. He then resorted to do something different.

On his official PayPal page, O'Brien urged people to crowdfund his return to England and he wrote, "Trying to raise some money to pay for this flight back to the UK. Rosie, the oldest in that photo, has a lung condition, this virus could kill her, I need to get back ASAP to help her out and keep her safe (After my campervan quarantine is done, of course!). Flights to get back to the UK are GBP 2250 / USD 4500. I have an idea. If anyone would love a 20 min Skype/vid call, one on one, talk about all things cricket, politics, sausages, mental health, Sachin, etc...If you’d like that & can spare a couple of USD or GBP, message me and we can work out a time. Please, only if you can, and allow me to give you something in return."

Within two days of the appeal of GBP 2250, O'Brien had a crowdfund of GBP 3870 and according to reports, O'Brien could fly back to England on April 5 with the latest available flight from New Zealand. O'Brien is offering, where practical, to repay donors by offering coaching tips or some of his experiences in the game. However, the Kiwi pacer will have to undergo a mandatory period of isolation when he reaches home but he intends to stay in his camper van which is outside his home in Matlock, which is situated in Derbyshire county of England. O'Brien's wife Rosie is a British citizen and O'Brien has residency status. 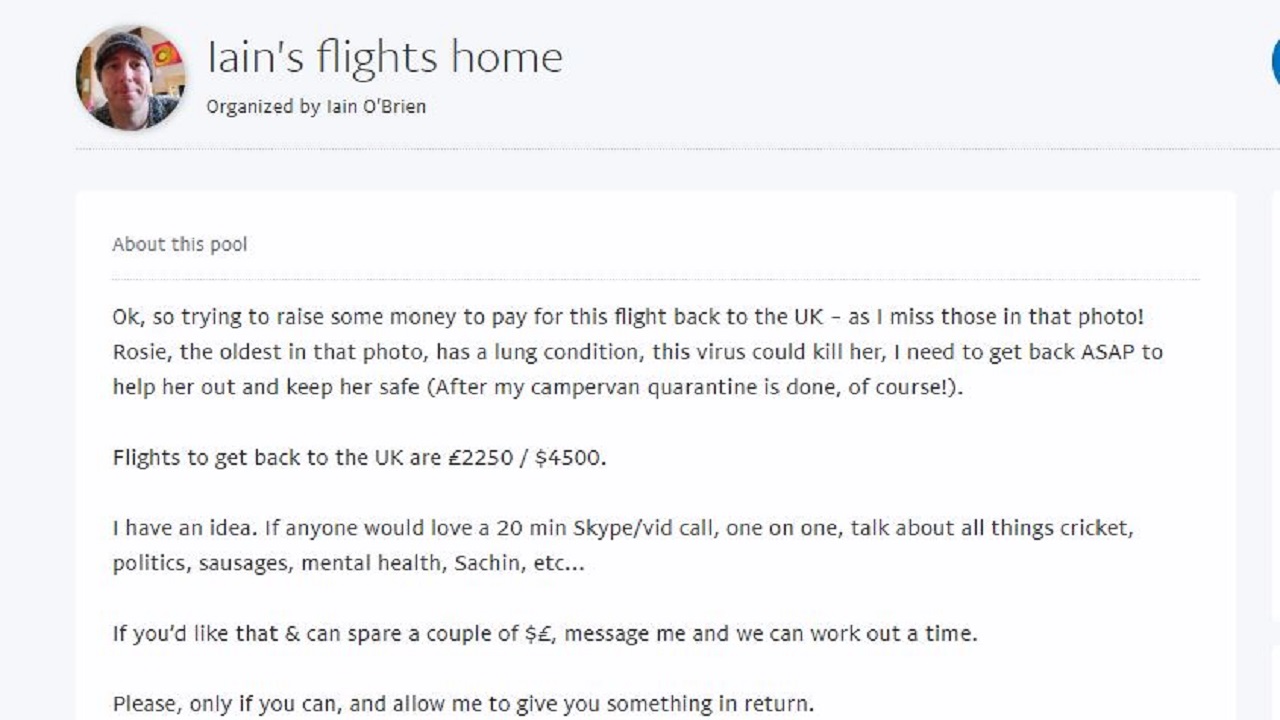 Iain O'Brien is offering services to the people who crowdfunded his trip to England. (Image credit: Iain O'Brien Paypal)

The Kiwi pacer's desperation to return back to England is primarily because he can take care of his wife and also take care of the family need to go out for shopping for essential items and minimise the risk of potential infection.

O'Brien, who made his debut against Australia in Christchurch in 2005, is best remembered for taking three wickets while bowling with a broken finger to give New Zealand a tense 32-run win against Pakistan at the University Oval in Dunedin in 2009. In 22 Tests, he took 73 wickets with his best haul of 6/75 coming in the 2008 Test against West Indies. O'Brien was considered the workhorse of the New Zealand bowling line-up who was a good first change in the presence of Shane Bond and Chris Martin. After he played his last Test in 2009, O'Brien turned to writing and his columns on ESPNCricinfo became immensely popular.