Pakistan, Led By The Inspirational Imran Khan, Defeated England In The Final Of The 1992 World Cup In Front Of A Packed Crowd In Melbourne To Win Their First Major Cricket Title.

Imran Khan led from the front as Pakistan beat the odds and won the 1992 World Cup by beating England in the final in Melbourne. (Photo Credit: Twitter)

Pakistan were in danger of being eliminated early from the 1992 World Cup held for the first time in Australia and New Zealand. A 10-wicket loss to the West Indies, a win against Zimbabwe followed by defeats to India and South Africa as well as an abandonment in the league game against England in Adelaide had made their situation desperate. Pakistan were set to pack their bags and go home. However, their skipper Imran Khan, had other ideas. In what has become part of cricket folklore, Imran told the Pakistan team to fight like 'cornered tigers' before the game against Australia in Perth.

Wearing a tiger t-shirt for the toss at the WACA in Perth, Imran, who was restricted by a shoulder injury and was primarily motivated for his cancer hospital project, symbolised the determination of Pakistan to turn the corner. Pakistan chose to bat and they were boosted by Aamer Sohail's 74 as they finished on 220/9. Boosted by Aaqib Javed's 3/21, Mushtaq Ahmed's 3/41 and two wickets from Wasim Akram and Imran himself, Pakistan registered a famous 48-run win to turn the tide. Pakistan then proceeded to defeat Sri Lanka and table toppers New Zealand as they reached the semi-final.

Their path itself was fortuitous, with the one point that they got against England in Adelaide despite being bowled out for 74 proving to be the game-changer. In the semi-final against New Zealand in Auckland, Martin Crowe smashed 91 and Ken Rutherford's 50 helped the hosts reach 262/7. In response, Pakistan were in trouble at 140/4 with only Javed Miandad standing tall. In stepped Inzamam-ul-Haq and he proceeded to announce his arrival on the big stage in grand style. He smashed 60 off 37 balls and Miandad smashed a fifty as Pakistan staged a remarkable victory by four wickets to enter the final where they would square off against England, who benefited from South Africa's epic rain-rule misinterpretation to reach the final for the third time.

In the final, England made the early breakthrough to reduce Pakistan to 24/2. However, the game turned when Graham Gooch dropped Imran off Derek Pringle. Imran proceeded to share a 139-run stand with Miandad as both players smashed 50. Imran was dismissed for 72 but a blitz from Akram and Inzamam boosted Pakistan. Inzamam hit 42 off 46 balls while Akram ended the innings in style with 33 off 21 balls as Pakistan finished on 249/6. England made a disastrous start with Akram dismissing Sir Ian Botham for 0 and Mushtaq Ahmed chipped in with two wickets and Aaqib Javed getting the wicket of Alec Stewart. 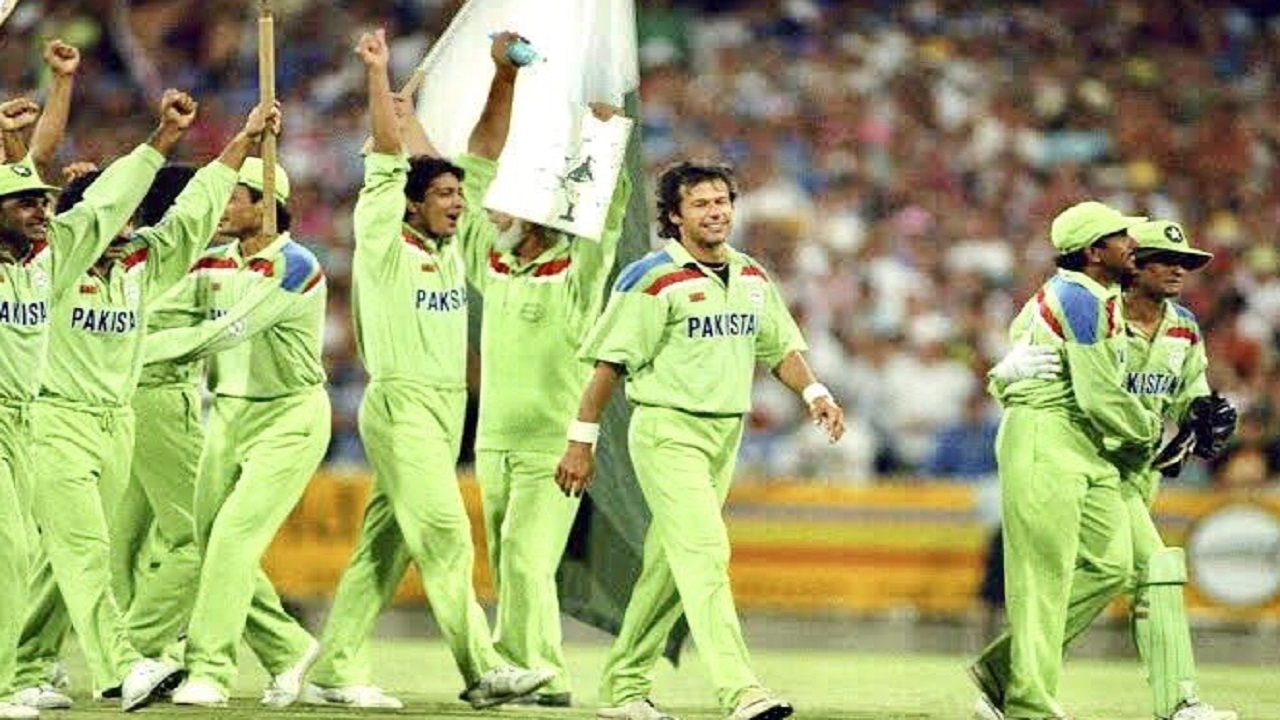 Neil Fairbrother and Allan Lamb stitched a solid 72-run stand and England were in the game. In came Akram and he proceeded to change the game with two magical deliveries that changed the concept of bowling. Akram cleaned up Lamb with a leg-cutter angled from round the wicket and in the very next ball, he dismissed Chris Lewis with a sharp inducker. Those two balls sealed the fate of England and despite Fairbrother's 62, England were playing catch-up.

Fittingly, it was Imran who took the final wicket as he sent back Richard Illingworth to seal a 22-run win and bring joy to Pakistan. Imran had led from the front and he cemented his reputation as one of the greatest players to ever come out of Pakistan. 28 years later, with Imran Khan now the Prime Minister of Pakistan, his exploits on the cricket field will remain legendary.