New Zealand Somehow Managed To Snatch Defeat From The Jaws Of Victory As They Botched Up Yet Another Run-chase And Lost The Match In The Super Over As India Extended Their Series Advantage To 4-0.

Shardul Thakur defended seven runs in the final over New Zealand lost yet again in the Super Over against India in Wellington. (Photo Credit: Getty Images)

It is official. The term 'chokers' has shifted from South Africa to New Zealand. Kane Williamson, after the Hamilton loss, remarked Super Overs are not the team's best friend. After Wellington, the Super Over could be the team's bitterest foe and there could perhaps be a movement in New Zealand to legally outlaw the Super Over altogether. For the second straight match, New Zealand crumbled in the final over. For the second straight match, they lost in the Super Over. In Hamilton, Mohammed Shami had nine runs to defend. In Wellington, Shardul Thakur had seven. In both cases, it was Tim Seifert and Ross Taylor who were the batsmen. Both once again failed to get New Zealand over the line and the match went into the Super Over. Seifert tried some redemption, but in the end, the calmness of Virat Kohli and the brilliance of KL Rahul helped India win the Wellington match on Friday and extend their advantage in the five-match series to 4-0.

For Thakur, who had endured a torrid tour so far, it was a brilliant story of redemption. He came into bat when India were staring down the barrel at 88/6 in the 12th over and he stitched a crucial stand of 45 with Manish Pandey to help India reach a defendable score. In the final over, he had seven runs to defend, two less than what Shami had in Hamilton. He started off brilliantly by getting rid of Taylor as the batsman miscued a knuckle ball to be caught at deep midwicket. Daryl Mitchell came to bat and he lofted Thakur over long off for a boundary. 3 off 4. In the next ball, Seifert, after all the hard work was run-out and three was needed off three balls. Mitchell Santner mistimed a short ball to deep midwicket but he slipped in the process of taking a second run.

With two needed off two balls, Mitchell had a brainfade as he mistimed a lofted shot to be caught at mid off. In the last ball, even Santner's judgment flew out of the window. Thakur bowled a full and wide delivery and Santner chased it. The ball flew to deep cover and only a single came about. Had Santner left the delivery, it could well have been a wide. But, such has been New Zealand's luck in the last two games that every small margin went against them. And T20 is a game of fine margins.

Undoing All The Hard Work

It is inexplicable as to how New Zealand could botch up a chase yet again after doing all the hard work. Chasing 166 on a wicket which had spongy bounce, it was Munro who set the ball rolling when he smashed Navdeep Saini for a four and a six. Martin Guptill was undone by the extra zip from a shortish ball from Jasprit Bumrah and KL Rahul took a skier. Seifert, who had smashed 84 in the previous encounter last year, was promoted to No.3. Munro looked in great touch with a six and two fours off Thakur as New Zealand ended the powerplay on 39/1. 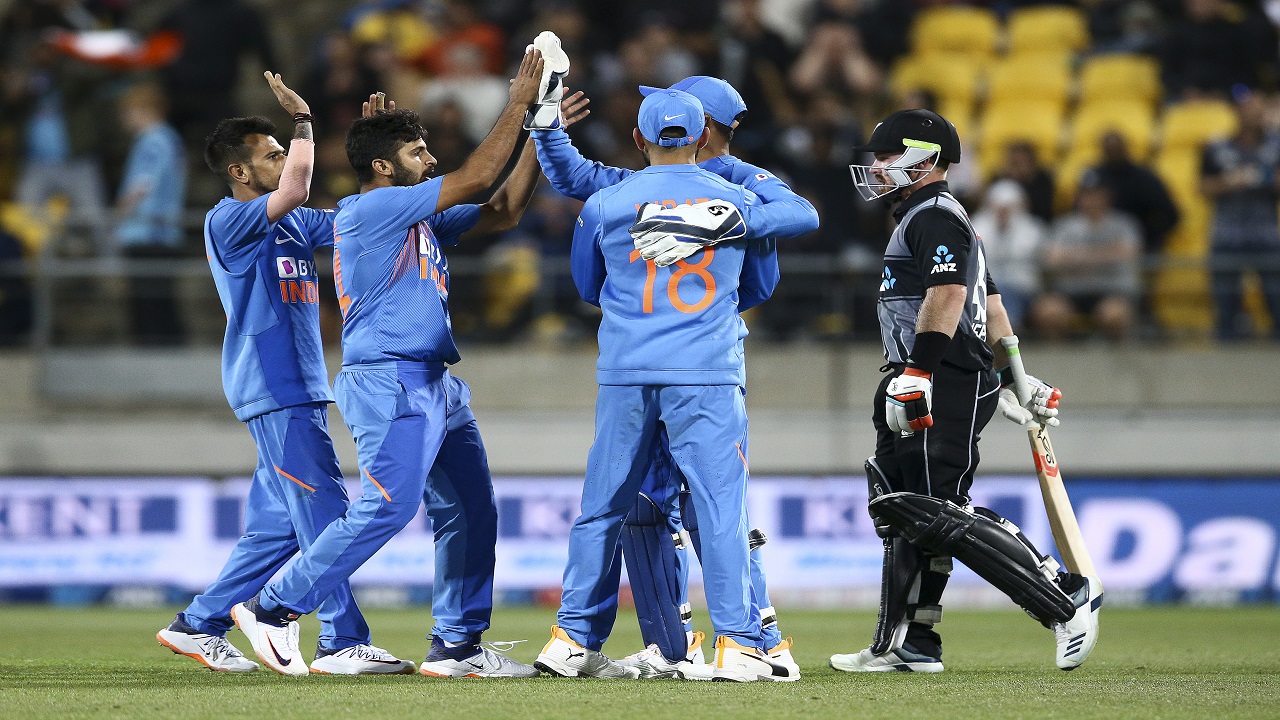 Shardul Thakur was the Man of the Match for his brilliant all-round show in Wellington. (Image credit: Getty Images)

When the spinners came on, both batsmen opened up. Seifert hit Washington Sundar for a boundary while Munro launched a six over deep square leg. Seifert carted a six off Yuzvendra Chahal and Munro notched up his 11th fifty with two fours off Sundar. Seifert and Munro found the boundary regularly and India needed something special to break the stand. They got in the 12th over. Munro drilled Shivam Dube to deep cover and Thakur relayed a throw to Virat Kohli. Kohli managed to fire a rocket throw and Munro was caught short in attempting the second. Tom Bruce was bowled round his legs by Chahal for 0 and India fought back.

But, Seifert was batting with confidence. He crunched Dube for a six over wide long on and he cracked a big six off Chahal. When Ross Taylor hit Chahal for a boundary, 17 runs had come off the over. Seifert neared his fifty with a steer off Bumrah and he late-cut the bowler to notch up his second fifty. 11 runs were needed off 12 balls. Saini, who had bowled a wicket-maiden in the last over during the clash against West Indies in Florida, delivered inch-perfect yorkers and only four runs came in the over. That set the stage for New Zealand to short-circuit again and Thakur came up with the goods again.

In the Super Over, Seifert looked for redemption as he thumped Bumrah for a boundary but he fell. Munro late-cut a slow ball and India needed 14 runs to win. Southee, who had bowled all the Super Overs since 2010, had a poor track record. In his period, New Zealand had won just one and lost five Super Overs. Soon, it was the sixth. Rahul killed the contest with a six and a four. New Zealand had a slight opening when Rahul was dismissed and India needed four off three balls. Kohli then showed New Zealand how to get a team over the line. Sensing that the field was set for a boundary, Kohli tapped a full ball wide of Southee and hustled for two runs. If only the likes of Seifert, Mitchell and Taylor had that sense, New Zealand would have gone over the line. Instead, Kohli pulled a short ball and India had won a match which they seemingly lost not once but twice.

India were inserted in and they made three changes to the side which won the Super Over in Hamilton. Rohit Sharma, Ravindra Jadeja and Mohammed Shami were rested while New Zealand were missing Kane Williamson. Sanju Samson came into the side and he got going with a six off Scott Kuggleijn. However, like how he approached the innings in Pune, Samson soon fell after hitting a six and his comeback score yielded just 8. Rahul was in fine form as he launched a six off Kuggleijn over deep extra cover and he punished Santner with a four and a six. 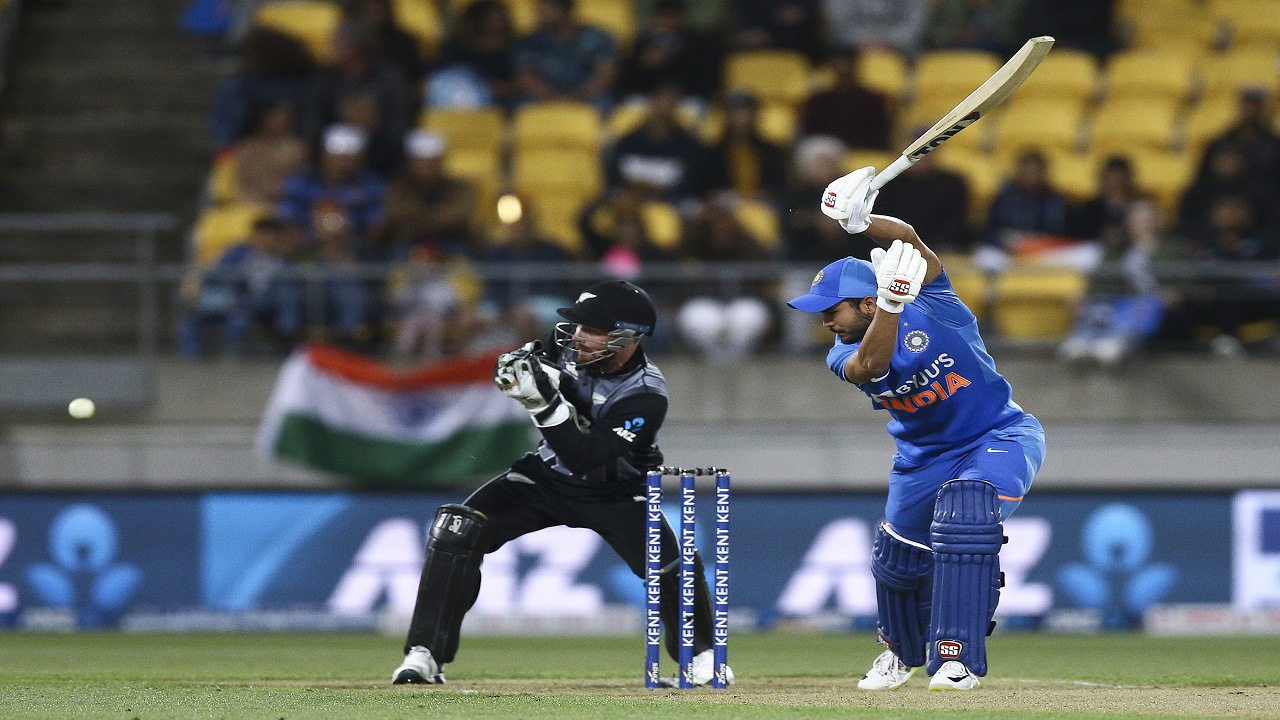 Manish Pandey hit a fifty and shared a partnership of 45 with Thakur to revive India. (Image credit: Getty Images)

Kohli got going with two fours off Hamish Bennett but the bowler had his revenge as he surprised the Indian skipper with extra bounce and the leading edge was pouched brilliantly by Santner who dived to his right to take a stunning catch. New Zealand dominated the middle overs with Ish Sodhi getting rid of Shreyas Iyer for 1. Shivam Dube looked good with two boundaries off Kuggleijn and Rahul was nearing a fifty. However, Sodhi dealt a body blow when Rahul pulled a short ball to be caught at deep midwicket. Sodhi took his third wicket when Dube mistimed the slog sweep while Santner sent back Sundar for 0.

At 88/6, it looked like India would be restricted to a below-par score but Manish Pandey showed his worth along with Thakur. Both batsmen rotated the strike with Pandey being the more aggressive of the lot. The 45-run stand slowly shifted momentum but Bennett sent back Thakur with a knuckle ball which the batsman mistimed.

Pandey found valuable support in Saini who smashed two fours off Bennett in the 19th over. Pandey smashed a four and notched up his fifty as India ended on a total which gave the bowlers something to bowl at. Hamilton and Wellington are extensions of New Zealand's ongoing nightmare in the Super Overs. Heading into the World T20, this is one area of serious concern. India are on their way to a whitewash and it will take something special for New Zealand to stop this rot.