KL Rahul And Shreyas Iyer Blasted Fifties As India Chased Down 204 To Win By Six Wickets And Take A 1-0 Lead In The Five-match Series Against New Zealand At Eden Park In Auckland.

KL Rahul blasted 56 and he was well supported by Shreyas Iyer as India won the Auckland T20I by six wickets to take a 1-0 lead in the series. (Photo Credit: Getty Images)

The straight boundaries at Auckland are just over 50 meters. Eden Park is a flat deck. There is dew in the night. Kane Williamson, in the post-match presentation, acknowledged that "defending is a very hard thing to do in Auckland". There was precedence. New Zealand had blasted 243 against Australia in 2018 only for the Aussies to chase the world record score down with seven balls to spare. Kane Williamson, in the post-match presentation, did acknowledge that "very hard to defend in Auckland". The New Zealand skipper is known for his tactical acumen, but alas, hindsight could not prove to be a comforter. Williamson, Ross Taylor and Colin Munro all chipped in with aggressive fifties.

Yet, their final total of 203/6 was miniscule due to the boundary dimensions, dew and nature of the wicket in Auckland. KL Rahul and Shreyas Iyer blasted aggressive fifties and aided by Virat Kohli's 45, India coasted to a six-wicket win in Eden Park on Friday to take a 1-0 lead in the five-match series. This was India's fourth chase of 200+ in the format and it was their second win in Auckland, having earlier won for the first time in this format in New Zealand in 2019.

Right from the outset, it was slam, bang and thank you madam action as both Munro and Martin Guptill gave New Zealand a rousing start. Guptill got going with a four off Jasprit Bumrah and Shardul Thakur while Munro signalled his intentions with a six off Thakur over deep extra cover. The fourth over saw Munro unleasing on Thakur as he slammed two fours and a six in the over which yielded 18 runs. Thakur's day only got worse as he misfielded a boundary to give Guptill momentum off Bumrah's over. Guptill ended the powerplay in style by lofting Shami straight over long on as New Zealand smashed 68 off the powerplay.

Shivam Dube gave India the breakthrough when Guptill pulled a short ball to deep backward square leg only for Rohit to take a calm, juggling catch near the boundary ropes. Williamson came on a mission and got going with a six off Dube while Munro notched up his 10th fifty. The New Zealand skipper launched two sixes off Thakur but the bowler had something to smile for when Munro completely miscued the pull to be caught by Chahal for 59. Ravindra Jadeja struck in his first over when Colin de Grandhomme flicked to short fine leg for a golden duck. 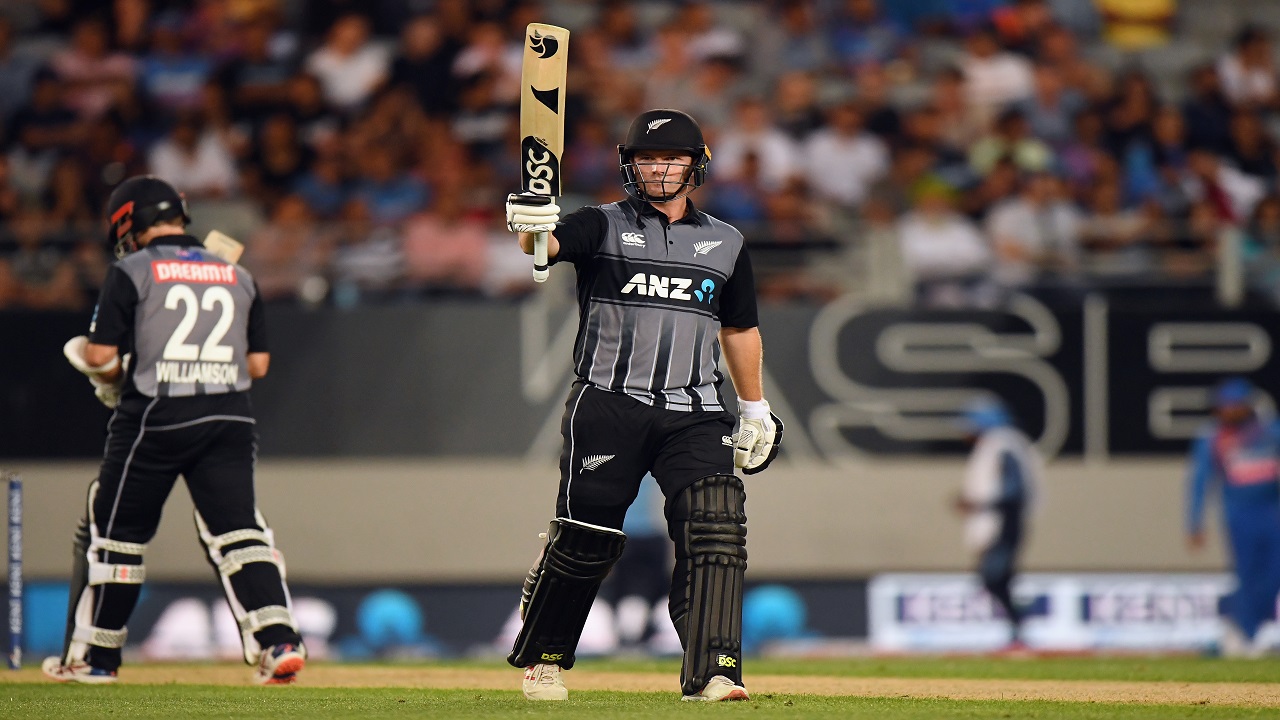 Williamson continued to deal with sixes and Ross Taylor gave glimpses of his old aggression by reverse lapping Jadeja and mauling the slog sweep over deep midwicket. The 16th over saw Williamson and Taylor combine to take Shami apart. Williamson heaved a four to the leg side but it was Taylor who blasted two sixes and a four as 22 runs came off the over. Williamson hit three fours off Chahal but after his reaching his 10th fifty, he too failed to continue. Bumrah bowled a brilliant 18th over and in the final over, some comical fielding saw Taylor reach his fifty. There was a moment of concern for India as Bumrah twisted his left ankle but continued to bowl. New Zealand ended on 203/5 but with Eden Park's history, it felt that the total was 15-20 runs short.

Rahul started the innings with a four off Mitchell Santner and Rohit Sharma also joined in the fun with a six but in trying to repeat the lofted shot, Rohit miscued an away-spinner from Santner to be caught for 7. Kohli looked in great touch and he got going with a superb six off Blair Tickner. India were maintaining a rate of over 10 throughout the chase and it helped them give a buffer in case of quick wickets. Rahul showed his class by whippliy flicking a six off Southee over deep midwicket and then thumping a four to fine leg.

New Zealand did not help themselves as they missed two run-out chances off Rahul in the same ball bowled by Bennett, with the fielders not giving good throws. Rahul made the most of his life and he neared fifty by crunching Santner down the ground for a boundary and fore-handing him over long off for a big six. New Zealand continued to be sloppy with Ish Sodhi dropping Kohli on 33 off Tickner and Rahul notched up his fifty off a free-hit by depositing the length ball from Tickner to the long on fence. 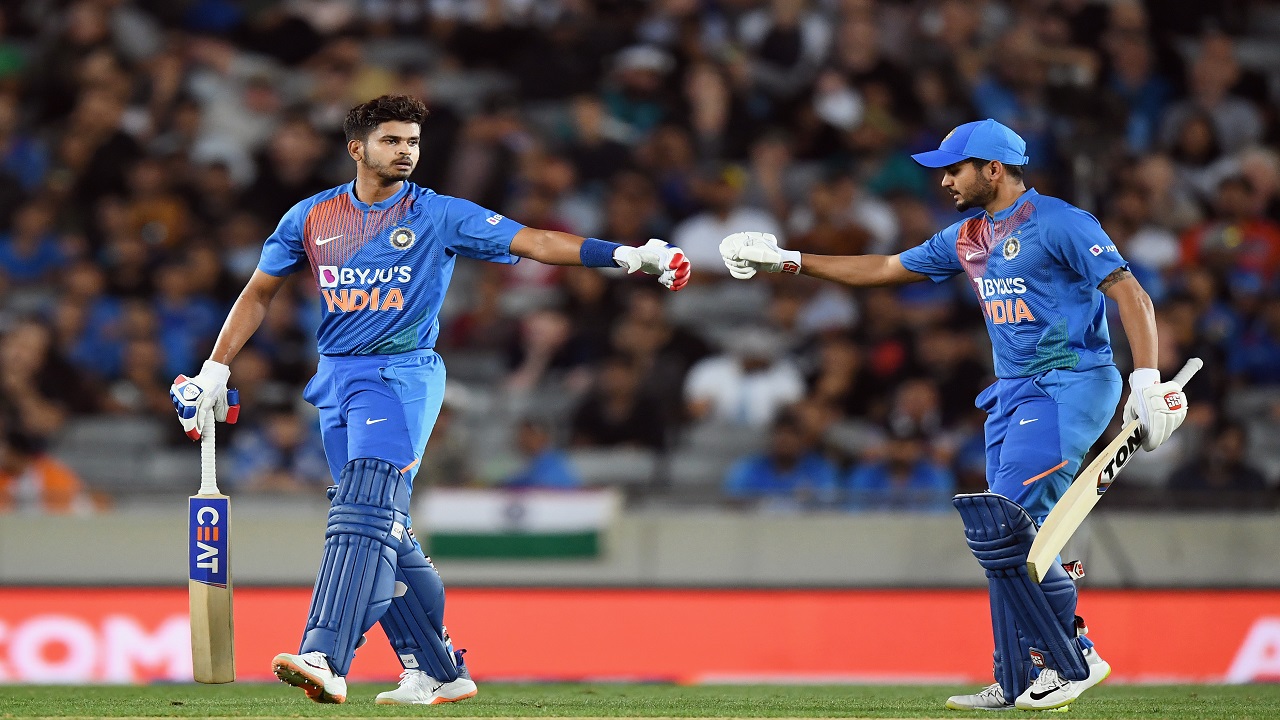 Shreyas Iyer finished the game in style and took India over the line in Auckland with his second fifty. (Image credit: Getty Images)

Ish Sodhi, the legspinner, looked to bowl wide outside off and it paid off as Rahul miscued the lofted shot to be caught for 56. The hosts stormed back into the contest when Kohli whipped a full ball from Tickner but Guptill lunged forward and took a great catch at deep midwicket. Shivam Dube struck a four and a six off Santner as India stayed ahead of the required rate but in trying to be aggressive, he holed out to Southee of Santner.

Iyer, though, was in great nick and the pressure was greatly relieved when Manish Pandey hit a six off Sodhi. Iyer helped a short ball from Southee for a six over long leg and he effectively killed the contest with two fours off Bennett. Iyer hit his second fifty with a four and a six off Southee and sealed the contest with a six as India started their journey of ending their T20 hoodoo in New Zealand on a high.