ICC Women's World T20 - India Hang On For Narrow Win Vs New Zealand, Through To Semis

The Indian Women's Cricket Team Survived A Late Assault From Amelia Kerr As They Won The ICC Women's T20 Encounter By Four Runs Against New Zealand At The Junction Oval To Seal A Spot In The Semi-finals Of The Tournament.

India have qualified for the semi-finals of the ICC Women's World T20 after beating New Zealand by four runs in the clash at the Junction Oval in Melbourne. (Photo Credit: Getty Images)

In the recent India vs New Zealand series involving the men's team, a pattern had emerged. The New Zealand team would dominate until the last over of the match only to 'choke' it up towards the end. At the Junction Oval during the ICC Women's World T20 clash between India and New Zealand, the reverse was seen. New Zealand were in big trouble at 46/3 in the 10th over. Katie Martin and Maddy Green had staged a mini-fightback but still, the White Ferns needed 34 off 12 balls with Poonam Yadav to contend. Amelia Kerr took the attack to Poonam and smashed four boundaries in the over. In the final over bowled by Shikha Pandey, Hayley Jensen and Kerr hit boundaries and the equation boiled down to five runs off one ball. However, Kerr could not get the big hit and India won the match by four runs on Thursday to become the first team to seal their spot in the semi-final of the tournament.

The fact that this became too close for comfort for India showed the onslaught that Kerr had unleashed and the disappointment that she encountered on leaving the pitch summed up how badly New Zealand wanted this. If one has to look at the margins in this match, the six struck by Radha Yadav on the fifth ball off Jensen ultimately proved to be defining.

A target of 134 seemed to have been underpar but with India's array of spin bowlers in Deepti Sharma, Rajeshwari Gayakwad, Poonam Yadav and Radha Yadav in the midst, chasing was never going to be easy at the slow and sluggish Junction Oval wicket. Rachel Priest started off like a train as she hit two boundaries in the first over bowled by Deepti Sharma but she mistimed a slog to midwicket off Shikha Pandey. Suzie Bates, who had struggled to time the ball, showed her intentions too early and her attempted ramp of Deepti Sharma cannonned onto the stumps. Sophie Devine, the skipper who had created a new record with six consecutive fifty-plus scores, tried to hoist a full toss from Poonam Yadav but she horribly mistimed it to point. Having finished the powerplay at a run-rate of five, New Zealand were already playing catch-up. Maddy Green and Katie Martin started the revival.

Martin and Green smashed two boundaries off Rajeshwari Gayakwad and Green launched Radha Yadav for a big six to deep midwicket. Martin also hit a boundary and the partnership kept New Zealand in the match but Green was undone by a delivery that spun away from Rajeshwari Gayakwad and was comfortably stumped. Amelia Kerr got going with a four and Martin hit Radha Yadav for a four but in the attempt of repeating the shot, she holed out next ball to widish long on. 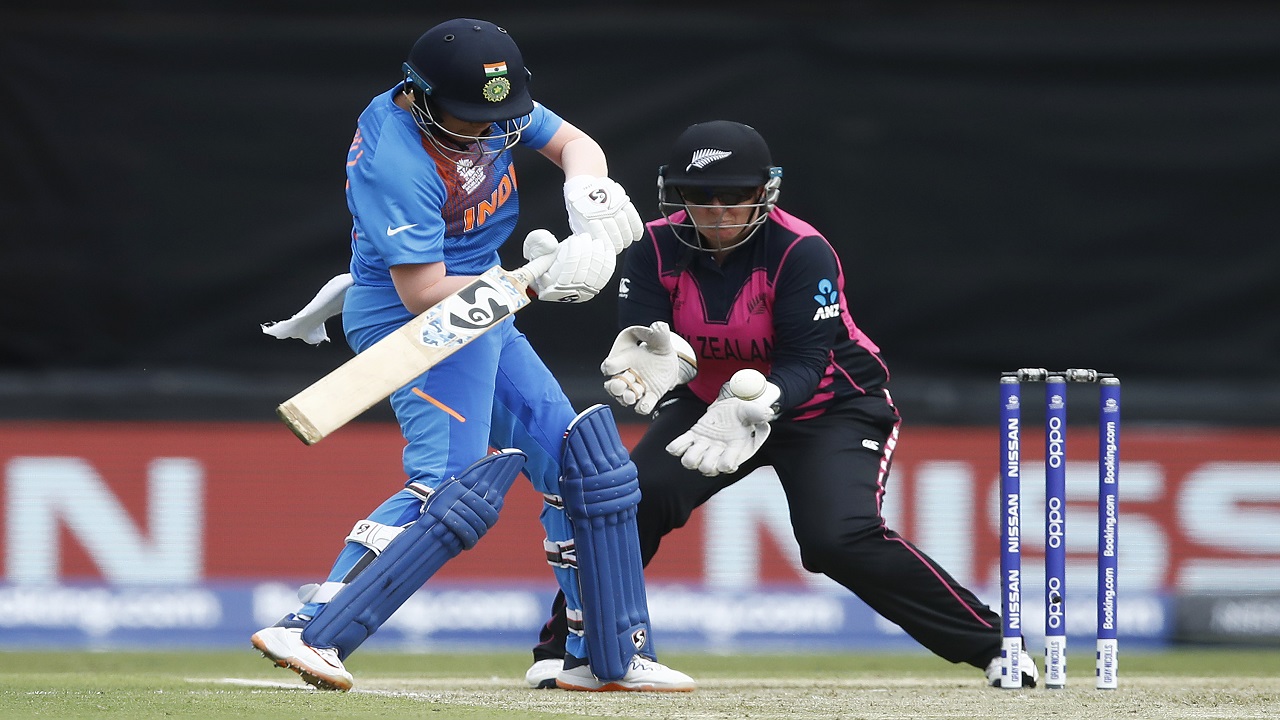 Shafali Verma gave India a fantastic start at the top but she once again missed out on a fifty. (Image credit: Getty Images)

Deepti Sharma conceded just six runs in the 18th over but that was the moment when Kerr perhaps gave a blueprint in how to tackle Poonam Yadav and her slow spin. Moving a bit to the off side, Kerr ramped the short balls effortlessly over fine leg and she reaped three boundaries. When Poonam Yadav bowled full outside off, Kerr sliced and lofted the shots over the infield as 18 runs came in the over. Suddenly, the match was assuming a tense feeling but Shikha Pandey held her nerve and ensured India would qualify for the semis. Radha Yadav's earlier contributions with the bat was crucial as India were once again boosted by an aggressive start from Shafali Verma only to lose their way in the middle overs yet again.

New Zealand chose to bowl and Smriti Mandhana, who returned to the side after missing the Bangladesh match due to fever, stepped up and smashed two fours. However, Mandhana chased a wide delivery from Leah Tahuhu without moving her feet and she dragged the ball back onto the stumps. Verma, the 16-year-old, stepped up a gear and smashed two sixes off Anna Peterson as India finished the powerplay on 49/1. New Zealand dropped Verma on 25 as the fielder failed to latch a catch at long on.

However, inexplicably, New Zealand yet again dropped Verma on 32 with Tahuhu fluffing a simple catch. Taniya Bhatia, promoted up the order, gave Verma good support as the partnership crossed fifty. However, the partnership was broken when Bhatia got a leading edge off Rosemary Mair to be caught at backward point. Verma, though, was batting in the Virender Sehwag mode and she aggressively tried hitting her shots even in the middle overs.

After losing Jemimah Rodrigues, Verma upper-cut a short ball to third man and walloped a lofted shot straight down the ground off Kerr. But, India were sliding in the middle overs. Harmanpreet Kaur's woeful form continued as she was caught and bowled by Leah Kasperek for 1. Verma, noticeably tiring, mistimed the lofted shot off Kerr to be caught at long on.

Deepti Sharma also benefited from a dropped catch by Maddy Green but Veda Krishnamurthy was trapped LBW by Kerr. Devine got rid of Deepti Sharma and at 121/7 in the final over, it was an underpar total. However, Radha Yadav's six in the fifth ball helped India over 130. When one looks at the match, that six was crucial in a semi-final spot for India and throwing the entire group wide open.