Virat Kohli's Indian Cricket Team Secured A Historic 137-run Win In Melbourne As They Took A 2-1 Series Lead In The Four-match Series. Get Highlights Of Boxing Day Test Here.

Virat Kohli's Indian cricket team were frustrated by the rain as the entire first session was washed out. However, on resumption, India achieved the task quickly to create history. Jasprit Bumrah took his ninth wicket in the match as he ended Pat Cummins' valiant knock of 63 while Ishant Sharma took the final wicket of Nathan Lyon to help India win the Boxing Day Test for the first time and secure a 2-1 lead in the four-match series. This is the first time since 1977/78 that India have won two Tests in a series in Australia and they will be aiming to create history in Sydney by winning the Test and securing their first-ever series win Down Under. For Australia, their miserable year ends on a sad note in Melbourne. (SCORECARD)

Jasprit Bumrah is the Man of the Match for his nine-wicket haul in the game. His 6/33 gave India the boost to push for a win

All over! History created. Ishant Sharma takes the final wicket and India have erased 37 years of pain to win the Boxing Day Test and secure a 2-1 series lead in the four-match series. They are on the cusp of breaking their jinx Down Under.

WICKET! It had to be Bumrah. It was Bumrah. Full ball angled in and it straightens just outside off, Cummins has to play at it and the edge is taken low at first slip. India one wicket away from a win but Cummins' valiant knock ends.

So far, Lyon and Cummins are doing a great job. The new ball is just nine overs old but they have shown their top order how to bat.

Three runs in the over from Ishant. Cummins and Lyon played him easily. However, they are struggling against Bumrah, who is getting zip and awkward bounce on the wicket. He is more likely to take a wicket.

There is some miscommunication about the footholes and sawdust. The groundstaff had come out but were asked to leave. Ishant is apparently having some troubles with the running area and the popping crease. But, play continues.

Ishant Sharma will begin proceedings. Three slips in place and Pat Cummins gets off the mark immediately.

The Indian players are assembling near the boundary line. We are just five minutes away from the start.

Want to know the weather condition in Melbourne? Here is an article to keep you updated with all the weather trends.

There is still some cloud cover. But, thankfully, no rain. The sun might not peek out at all today but the groundstaff are doing an excellent job to ensure the square and the pitch are bone dry.

The covers are now starting to come off. If all goes well, then play could begin at 7:20 AM. Fingers crossed

There are now a minimum of 71 overs remaining in the day should there be a resumption. The extra eight overs have been taken off. So, if play continues full time, that is till 12:30 PM IST, then India will have 71 overs.

The updated weather forecast, according to accuweather Melbourne, says there is a dry spell from 1 PM to 3 PM local time but there is a chance of a thunderstorm at 4 PM. Which means, India will have a chance from 8 AM to 10 AM IST to take the remaining two wickets.

According to the latest BCCI update, lunch will be taken at 12:15 local time, meaning 6:45 AM IST. Things might start to brighten up for the Indian side probably after that

It is still raining. According to the weather radar, the rain will clear out in the afternoon and we will have play, but only after the ground has been mopped up and the umpires deem it fit to play.

The rain is steady now. The chances of resumption, at least in the first session, look bleak now.

This is the current situation at the MCG. Covers firmly in place and so are the umbrellas. But, as mentioned, the forecast for the afternoon is great. 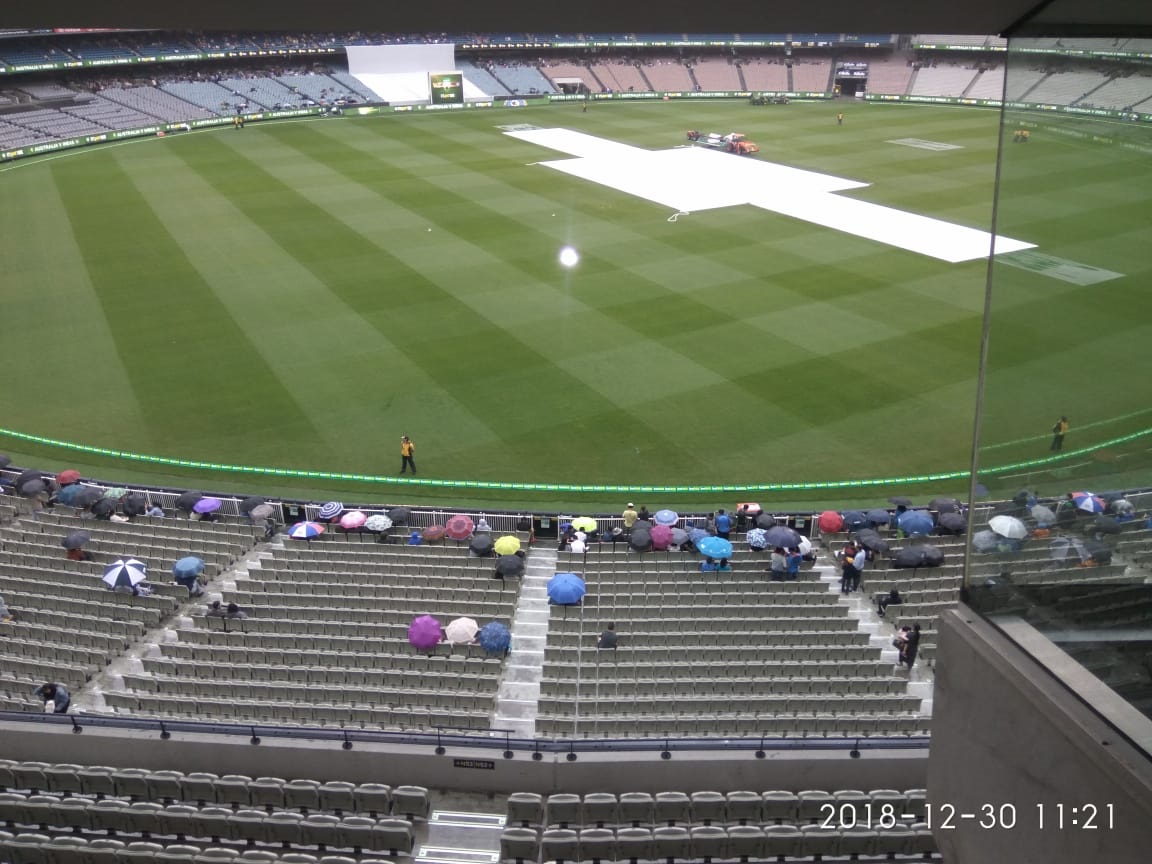 The forecast in the afternoon session is not so bad. So, one way or the other, play will start although the first session could be completely washed out.

More covers have been brought on at the G. The run-up area has also been covered. Indian fans better start praying.

The groundstaff are apparently putting on the bigger covers. They are expecting some more rain apparently. This is not good news.

Uh-oh! It looks like the rain is back again. This time, it is more heavier than a normal drizzle. The covers are coming back on.

In the New Zealand vs Sri Lanka game, it took Kane Williamson's side just 14 balls to take the remaining three wickets to clinch the Christchurch Test by 423 runs and win the series 1-0. How many balls will India take to price out the remaining two wickets?

If there is no further rain, play will start at 5:30 AM IST, which is 15 minutes from now.

UPDATE: If there is no further rain then play will start at 11am AEDT #AUSvIND https://t.co/0glOblMnaq

Well, the good news is immediately here. It has stopped raining. The ground mopping up operations have ended. Play will start soon.

Hello and a warm welcome to the final day of what has been a gripping Boxing Day Test. However, for Indian fans, this is not the ideal start. It is currently drizzling in Melbourne and the covers are on. Rain was forecast today and it has come. India need two wickets. Australia need 141 to achieve the unthinkable.