IND VS BAN Delhi T20I Live Cricket Score: Get All The Live Updates From Arun Jaitley Stadium In Delhi.

Bangladesh will play against India without two of their top players. (Photo Credit: Twitter/@BCCI)

IND VS BAN Delhi T20I Live Score: Bangladesh embark on its mission to take down formidable India as the clash on Sunday in their first T20 International at Arun Jaitley Stadium in Delhi even as the pollution level in the city remained hazardous. The national capital is reeling under prevailing smoggy conditions with health-emergency put in place but Bangladesh captain Mahmudullah made it clear that his team is not focusing on pollution but the game. However, an ever-bigger challenge for them will be facing formidable India without their biggest matchwinner Shakib Al Hasan, who has been banned from international cricket for 2 years by the ICC. India, on the other hand, will be led by Rohit Sharma in the absence of Virat Kohli. The men-in-blue have been in a pleasing form but would like to tread warily as taking Bangladesh for granted won’t be wise. Stay with us as we bring you ball by ball live coverage of the match.

#10:22 pm: Interesting! Shivam Dube will bowl the final over. Seems like Rohit has also given up.

#10:20 pm: FOUR More! Rahim is showing his class and Bangladesh is now eight runs away from victory.

#10:20 PM: FOUR! Back to back boundary. Rahim has taken Bangladesh a step closer towards the victory.

#10:19 pm: FOUR! Short, down the leg and slow. Rahim pulled it to deep backward square leg fence for four!

#10:16 pm: Khaleel Ahmed will bowl the 19th over, which means Deepak Chahar will have the responsiblity of the final over. Can India defend this?

#10:15 pm: FOUR! Mahmudullah waited for it and litterally slapped it wide of Manish Pandey at long-on. He dived to failed to stop the boundary. Bangladesh needed 22 in 12 balls.

#10:12 pm: Dropped! Krunal Pandya must know its criminal to drop such a catch at this moment. Moreover, its a four! Has he dropped the match as well?

#10:10 pm: Chahal comes back into the attack. Skipper Mahmudullah is the new man in.

#10:07 pm: In the airrrr drops just short of fielder at wide long-on. Two runs. Run rate goes to 11 as Bangladesh need another 35 to win this.

#09:52 pm: Rohit introduces pace attack. Khaleel Ahmed is back into the attack

#09:49 pm: SIX! What a shot!!! Soumya Sarkar comes down the track. Krunal bowled it wide of off. It was well out of Sarkar's reach, what Pandya thought, but actually he reached to the ball, got the elevation and hit it over deep midwicket for a maximum. Another expensive over from Krunal. He conceded 12 runs. Score after 14 overs: BAN 94-2; Rahim 25(24), Soumya Sarkar 34(28)

#09:47 pm: Krunal Pandya is back into the attack. Can he provide India with a breakthrough? Off course he can, but will he do that now is the big question. India needs it badly.

#09:43 pm: Washington Sundar is back into the attack. India needs wickets not just one but two. Sarkar and Rahim has built nicely after the fall of Naim's wicket. They know the target is not big. All they need to do is keep the nerve and play risk free cricket.

#09:39 pm: Four! Another sweep shot from Rahim and the result is also the same. I am the boss of sweeps, Rahim must be feeling after taking three boundaries with the same shot.

#09:35 pm: To salt to the injury, India didn't take review for two LBW appeals from Chahal. And gues what, both were out. And they wasted it on Pant's appeal.

#09:33 pm: Loud appeal for caught behind from Rishabh Pant. He convinces Rohit to take the review. And there is not edge. India lost the review and Rohit Sharma's reation is epic. Score after 10 overs: BAN 62-2; Soumya Sarkar 20(18) Rahim 7(10)

#09:31 pm: Loud appeal for a LBW but turned down. India won't take the review. Had they taken it, replay shows, Rahim would have a goner. Also missed a run out chance.

#09:28 pm: FOUR! Rahim goes for the reverse sweep. He knows Bangladesh can't lose momentum here as India is known for bouncing back.

#09:24 pm: OUT! Naim is caught by Dhawan. Chahal strikes in his first over of the innings. Naim went for the slog sweep but the ball took the edge and went up high in the air towards long-on where Dhawan takes a good catch. A much needed breakthrough. Score after 8 overs: BAN 54-2; Soumya Sarkar19(16) Rahim0(0)

# 08:56 pm: OUT! Bangladesh loses its first wicket as Liton Das is caught by Rahul at cover-point.

#08:37 pm: SIX! 16 runs off the last over. 30 runs in the last two. Krunal Pandya pulled it over square leg for another six. India post 148 at board. Dew is likely to play a crucial role here but its still a fighting total. Bangladesh would be satisfied with bowling efforts. Will be back in a while, stay with us.

#08:34 pm: SIX! Washington Sunder is playing a crucial cameo here. It was a slower delivery outside off and Sundar stood tall and sent it sailing over long-off for maximum.

#08:28 pm: OUT! Rishabh Pant wanted to go big but could not clear the boundry and the ball goes straight into the hands of Naim at long-on. He scored 27 runs off 26 balls. Washington Sundar replaces him.

#08:25 pm: Just eight off the over. India needs more. The pitch is paying a little slow and if India can take it to 140, it won't be easy for Bangladesh in the absence of Tamim Iqbal and Shakib, their two key players. Shafiul Islam comes back into the attack. Score after 18 overs: IND 118-5; Pant 25(24) Krunal Pandya 3(3)

#08:23 pm: FOUR! It was a slow bouncer from Al-Amin and Pant waited for it. He looked to go for pull but then just helped it over the keeper's head for four.

#08:21 pm: Al-Amin Hossain is back into the attack. Bangladesh would be a happier side at the moment as the have kept Indian batsmen in check.

#08:17 pm: FOUR! Wonderful shot from Pant. Opened the face of the bat and used the pace to steer it behind square for four.

#08:16 pm: Mustafizur Rahman is back into the attack. Krunal Pandya is the new man in.

#08:13 pm: FOUR! First boundry from Pant. He sliced it towards deep backward point for four.

#08:06 pm: SIX! Massive hit from Dhawan as he dances down the track and send it over the long-on. It went high and over the boundry ropes.

#08:05 pm: Bangladesh introduces more off spin and this time captain Mahmudullah himself has come into the attack.

#07:58 pm: Mosaddek Hossain comes into attack as Bangladesh continue with more off spin.

#07:57 pm: A very good over from Afif as he conceded just two off it. Bangladesh has succesfully kept India at the bay by taking wickets on regular interval and they would not mind anything below 150. Score after 12 overs: IND 75-3; Dhawan27(34) Pant2(3)

#07:55 pm: Afif Hossain, right-arm off break, comes into the attack. Dhawan has been a tad slow today. India has depth in their batting so he can takes his chances now and presses the accelerator.

#07:49 pm: OUT! Aminul Islam takes his second wicket of the innings. Iyer fall into the trap and went for it after Aminul gave it a plenty of air. Iyer lost the grip of the bat and played it over long-off with one hand. Could not clear the ropes and debutant Naim took a good catch near the boundry line.

#07:36 pm: Spin from both ends. Soumya Sarkar, right-arm medium, comes into the attack.

#07:35 pm: SIX! Looks like Iyer has come prepared from the dressing room itself. It was a tossed up delivery from Aminul and Iyer played it over deep extra cover for a six. Score after 7 overs: IND 44-2; Shreyas Iyer7(2), Dhawan13(18)

#07:32 pm: OUT! KL Rahul once again fails to convert a good start, though a soft dismissal. Aminul strikes in his very first over of the innings. Shreyas Iyer comes to bat.

#07:31 pm: Spin introduced in the 7th over as Aminul Islam, right-arm leg break, comes into the attack.

#07:28 PM: FOUR! A back of length delivery by Shafiul Islam who changed the end. It kept low but Rahul was too classy to play a pick shot that flied over square leg for four.

#07:13 pm: FOUR! Beautiful boundry by KL Rahul. Footwork at its best. Rahul treks back a bit and cut it towards the point for four.

#07:04 pm: Boundary! Second four of the over from Rohit Sharma and one ball is still to go.

#07:01 pm: Four! Rohit Sharma, who is in the form of his life, has made his intentions very clear. It was down the leg and Rohit just flicked it past third man for bounday.

#07:00 pm: And action begins. Rohit Sharma and Shikhar Dhawan are out in the middle to open India's innings. Shafiul Islam will open Bangladeshi attack.

#06:40 pm: Shivam Dube will make his international debut in T20's for India while Mohammad Naim will play his first T20I for Bangladesh. 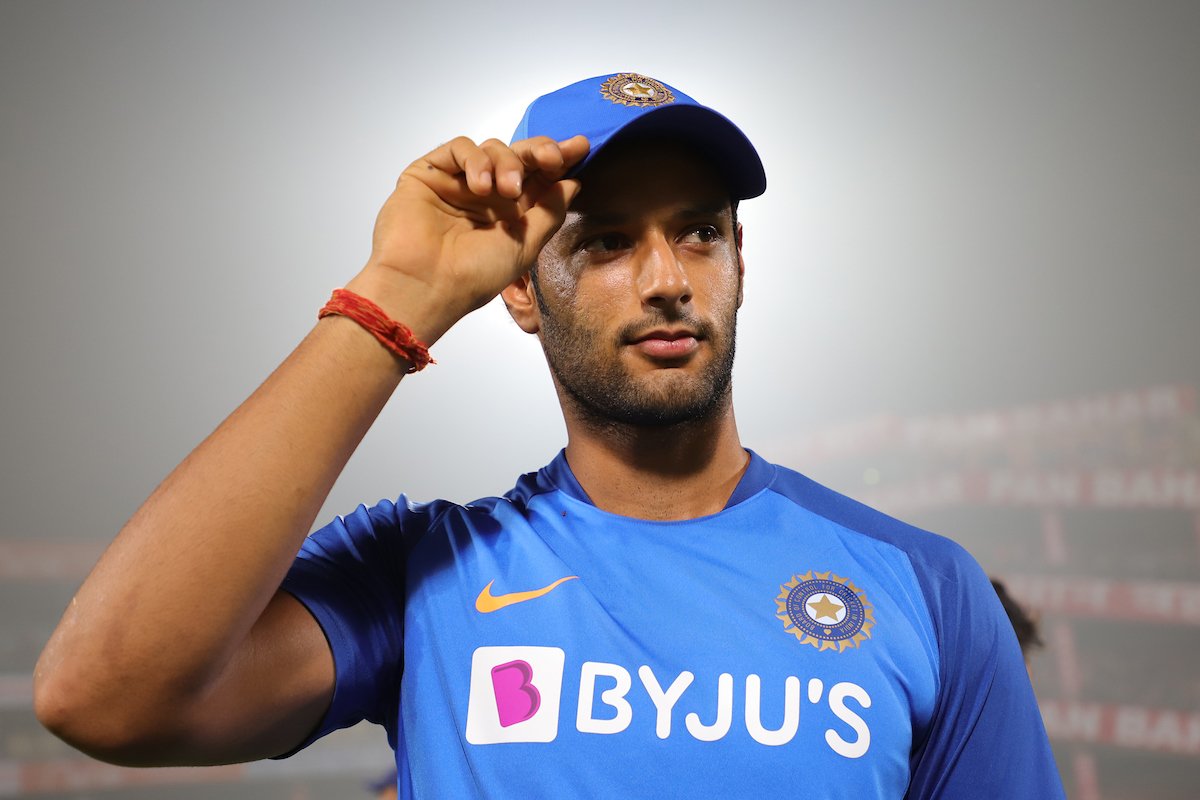 A look at the Playing XI for #INDvBAN pic.twitter.com/Ln61FCuhyE

#06:32 pm: Its toss time. Bangladesh has won the toss and they have decided to field first.

Bangladesh wins the toss and elects to bowl first in the 1st @Paytm T20I at Delhi.

# 06:05 pm: India vs Bangladesh game will be the 1000th men's T20I game. So far, Virat Kohli is the leading run scorer in this format of the game with Rohit Sharma just 7 runs behind. WHo do you think is the highest wicket taker? Tweet us your answers and one lucky person's tweet will feature in our blog. Also, don't forget to tag @NewsNationTV.

The 1000th men's T20I, between India and Bangladesh, will start in exactly one hour's time!

Which of the first 999 games has been the most exciting?#INDvBAN pic.twitter.com/hFIef4hIAC

#06:00 pm: Hello and welcome to News Nation live coverage of India vs Bangladesh T20I which is being played at Delhi's Arun Jaitley Stadium, formerly known as Feroz Shah Kotla. The pollution level is beyond severe and we suggest you to use masks if you are going to watch the game. Stay with us as we bring you all the live action.