India Are One Step Away From Winning The Under-19 World Cup For A Record Fifth Time While Bangladesh Will Be Aspiring To Create Their Own History And Win The Title For The First Time But Rain Could Have The Final Say In Potchefstroom.

India have been in dominant form during the ICC Under-19 World Cup and they will be aiming to get over the line against Bangladesh. (Photo Credit: Getty Images)

One team is eyeing a record fifth title in the Under-19 World Cup. The other is looking to script history by upsetting one of the cricketing giants in the world and putting themselves on the map. The contrasting story of India and Bangladesh in their journey to the final will be stark evident when both teams come out on Sunday at Senwes Park in Potchefstroom. The Indian cricket team has been dominant in this tournament, beating New Zealand, Australia and Pakistan in their path to the final. Bangladesh, on the other hand, secured big wins against South Africa and New Zealand to script the first all-Asian final in the Under-19 World Cup since 2006.

Be it Yashasvi Jaiswal or Mahmudul Hasan, both teams have future stars who could make it big for their national sides in the near future. India's bowling, though, is far more stronger than Bangladesh, who have relied on the likes of Rakibul Hasan for consistent breakthroughs. Kartik Tyagi, Sushant Mishra, Ravi Bishnoi, Atharva Ankolekar and Akash Singh have been playing really well and have contributed at vital times for the team. India's bowling makes them far more potent than the Bangladesh attack and it is this factor which will work for them in the final.

However, there is a factor beyond them which could change the outcome of the final. The weather in Potchefstroom has been dodgy and there is a 50 percent chances of rain on the final. With no reserve day, the prospects of sharing the trophy are looking more likely. Both teams will be hoping that the rain stays away just as much as they can get a full match in.

The weather, unfortunately, in Potchefstroom is not too promising. The chances of rain at Senwes Park is fifty percent. On Saturday, showers are predicted throughout the day while on Sunday, the rain could play the spoilsport. For the first time, there is a distinct possibility that rain might force both teams to share the trophy.

The wicket in Senwes Park, Potchefstroom has seen pacers getting assistance early on before the spinners come into play. A total in excess of 250 has been match-winning. With both teams having good pacers and quality spinners as well as talented batsmen, the pitch could dish out a decent score in the final.

The Indian and Bangladesh teams have performed well in the competition and that is mainly due to a settled composition of batsmen and bowlers. Both teams might not make changes for the final. 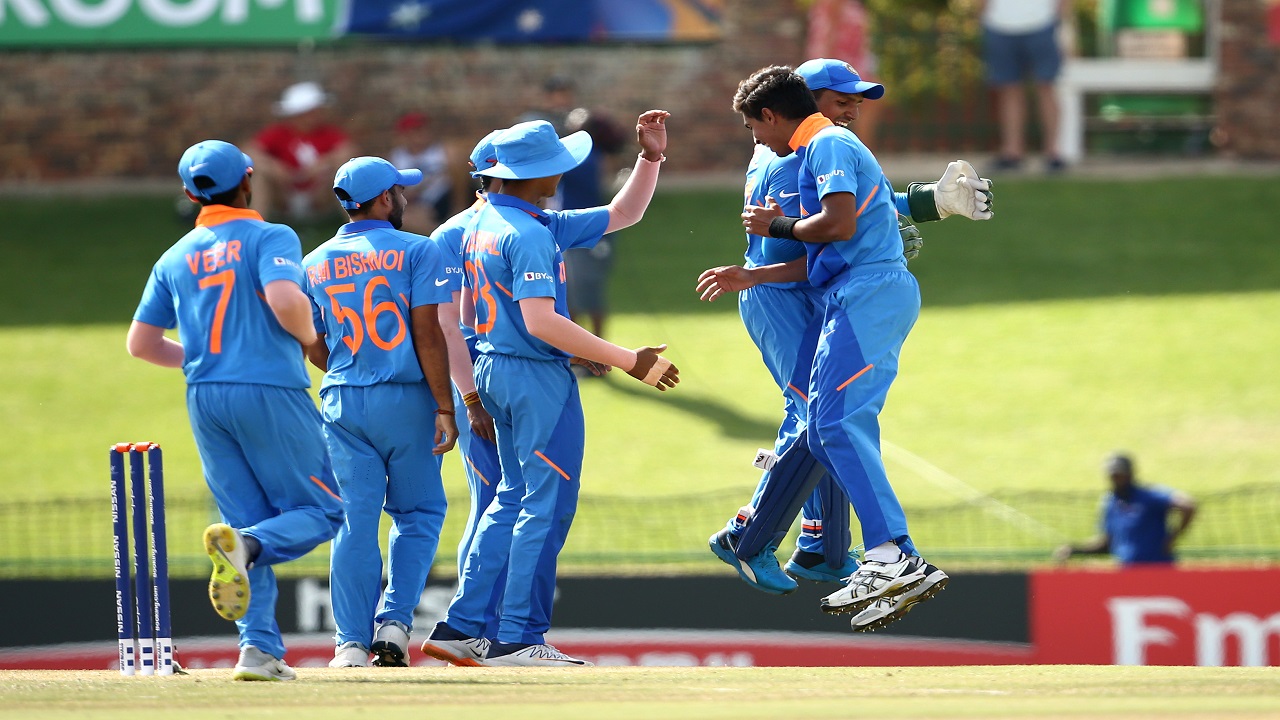 India will be aiming to win the Under-19 World Cup title for a record fifth time. (Image credit: Getty Images)

Senwes Park has seen teams batting second have a distinct advantage and it might be the same in the final. The team that wins the toss might want to bowl first and know what the target is. However, in the final, scoreboard pressure does play a big role and the team that bats first will have to put up a huge score.

This will be the fifth encounter between India and Bangladesh in the Under-19 World Cup. They have played four games in this tournament with India winning three and Bangladesh one. India won the first game in Moratuwa by 122 runs. However, Bangladesh won their next encounter in Auckland in the 2002 edition by two wickets. India won the next two games and heading into the final, they have an edge over Bangladesh having won the tri-series final in Hove and the Under-19 Asia Cup in Colombo.

India have been strong in all facets of the game in this edition of the tournament. With the side having finals experience in big tournaments, psychologically, they have the edge over Bangladesh in the final. Priyam Garg's side are favorites to win the trophy for a record fifth time.