Virat Kohli's Indian Cricket Team Suffered A 10-wicket Loss In The First Test At The Basin Reserve In Wellington And They Will Be Determined To Come Back On Level Terms At The Second And Final Test At The Hagley Oval In Christchurch.

Before their tour to New Zealand, the Indian cricket team were the only team who were undefeated in the ICC World Test Championships, notching up easy wins against West Indies, South Africa and Bangladesh. The batting and bowling clicked as a complete unit and it seemed no team would be able to stop them. Try telling it to New Zealand, the dark horses who perenially punch above their weight in international cricket. After getting whitewashed 5-0 in the Twenty20 Internationals, it seemed Virat Kohli and the Indian team would thoroughly dominate the Kiwis in all formats and seal their spot for the 2021 ICC World Test Championship final in Lord's.

However, that has not been the case. New Zealand turned the tables by whitewashing India 3-0 while in the first Test, they used the conditions superbly. Kyle Jamieson and Tim Southee utlitised the swing and bounce from the Basin Reserve wicket to take four wickets apiece. They also used the wind to perfection and troubled the Indian batsmen. With the bat, Kane Williamson and India's familiar inability to bowl the tail out cost them as they conceded a huge 183-run lead. In the second innings, Tim Southee took his ninth five-wicket haul as India were bowled out for under 200 again.

Heading into Christchurch, the Indian cricket team have issues. Virat Kohli has hit only one fifty so far in the entire tour which matches his lean run in England 2014. Jasprit Bumrah did not take a wicket in the ODI series and in the Wellington Test, he was looking rusty. There are question marks over Prithvi Shaw's fitness and it is likely that Shubman Gill will make his debut. However, Bumrah had an intense workout in the nets in Christchurch and he seemed to have gotten back in rhythm. Kohli will also be determined to end the tour on a high but it will not be easy against a New Zealand team that has high class bowlers in Trent Boult and Tim Southee while they have Jamieson and are welcoming back Neil Wagner.

The weather at the Hagley Oval is mixed. The opening day will see sunshine and a few clouds with a temperature of 31 degrees. However, on the second day, there are 40 percent chances of rain and we could see a curtailed Test. The third and the fourth days are expected to be clear with no rain but the fickle weather will return on the final day of the Test match. This could thwart India's attempt to win the Test and level the series. If India wins this Test match, it will only be the third win for India in the last 44 years in New Zealand.

The pitch at the Hagley Oval in Christchurch has always assisted seam and bounce. This is the reason why the top wicket-takers at this ground are Trent Boult, Tim Southee, Neil Wagner and Colin de Grandhomme. Boult has taken 37 wickets, Southee has 32 wickets while Wagner has 23 wickets followed by Colin de Grandhomme with 13. New Zealand and India are expected to field a four-pronged pace attack at the Hagley Oval with the spinners possibly not getting any sort of assistance.

There will be changes for both teams heading into the Christchurch Test. Neil Wagner is all set to replace Ajaz Patel who did not bowl too many overs in Wellington. Thus, New Zealand could basically be operating five pacers in Boult, Southee, de Grandhomme, Wagner and Jamieson. India are also expected to make some changes. Prithvi Shaw's swollen left foot might hand a debut to Shubman Gill while Ravichandran Ashwin could be benched for either Umesh Yadav or Ravindra Jadeja. With India wanting more buffer with the bat, they might give Jadeja the go-ahead in place of Umesh for this Test match. 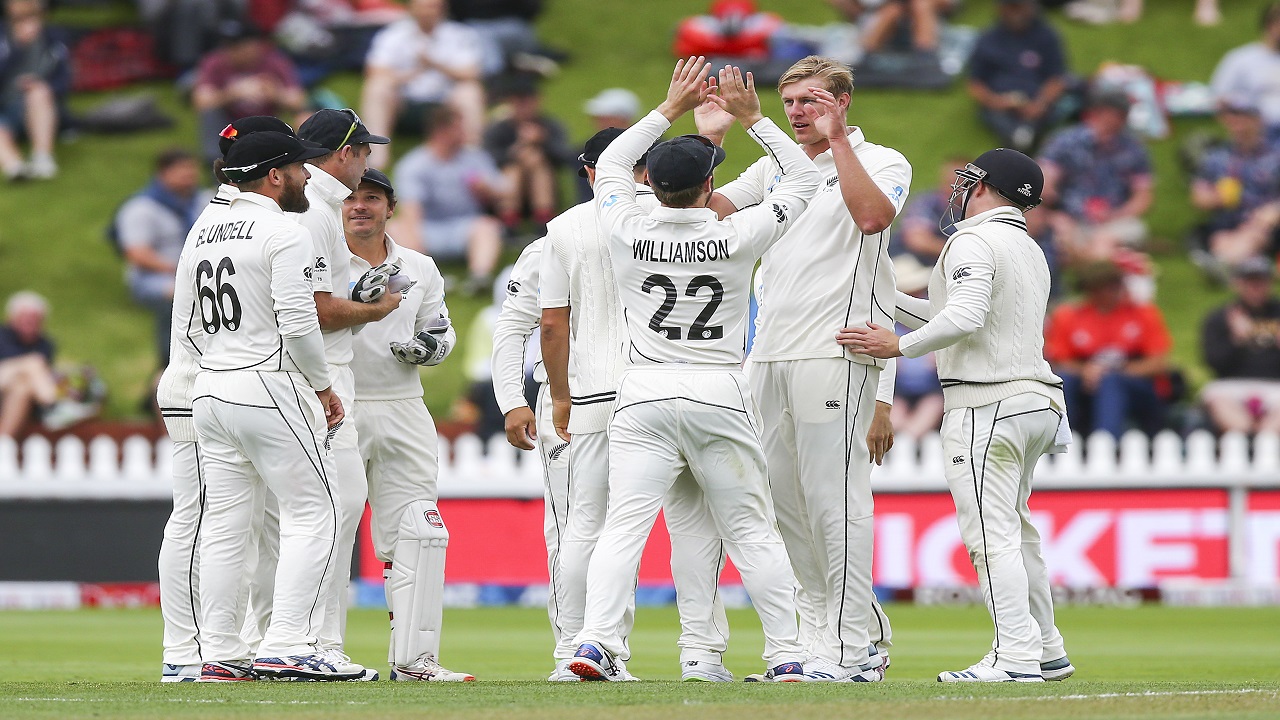 New Zealand are on the cusp of achieving their first series win in the currennt ICC World Test Championships. (Image credit: Getty Images)

Past Record At Hagley Oval

There have been a total of seven Test matches played at the Hagley Oval. However, the seventh match that involved Bangladesh was cancelled due to the terror attacks in Christchurch two days before the Test match. Out of the six Tests played, New Zealand have won five and lost once against Australia in 2016. That was the last Test for Brendon McCullum and he ended it in style by blasting the fastest century in this format. India will be playing at the Hagley Oval for the first time.

India's Test record in New Zealand is woeful and it has been seen that whenever they have lost the first Test in modern times, they have not gotten back on level terms in New Zealand. With India slightly low on confidence heading into the Christchurch Test, New Zealand look favorites to seal the series.

Most Runs, Wickets And High Scores