The Indian Cricket Team Achieved A Massive 10-wicket Win Against Arch-rivals Pakistan In The Semi-final Of The ICC Under-19 Cricket World Cup And It Improved Their Record In Major Events To A Staggering 12-2 In The Last Decade.

India's 10-wicket win against Pakistan in the semi-final of the 2020 ICC Under-19 World Cup levelled the score to 5-5. (Photo Credit: Getty Images)

The Indian cricket team continued their dominance in the ongoing ICC Under-19 Cricket World Cup 2020 with a clinical display against arch-rivals Pakistan in the final. Yashasvi Jaiswal's brilliant century and his unbeaten 176-run opening partnership with Divyansh Saxena continued India's great match after the bowlers, led by left-arm pacer Sushant Mishra, Ravi Bishnoi and Kartik Tyagi laid waste to Pakistan's top order which was restricted to 172 all out. Yashasvi Jaiswal slammed a century and he also became the leading run-getter in the 2020 edition of the ICC Under-19 World Cup. The win against Pakistan propelled them to the final and they are favorites to win their fifth ICC Under-19 World Cup title on Sunday.

The win against Pakistan continued India's dominant run in major ICC men's events in the last decade. The events that are considered are the ICC Under-19 World Cup, the World T20, ICC World Cup and the ICC Champions Trophy. Since 2010, India's scoreline when it comes to ICC events against Pakistan is a staggering 12-2. It is no secret that India's dominance in Pakistan when it comes to the ICC World Cup is 7-0. However, with the win in the semi-final at Potchefstroom, India's ICC Under-19 World Cup head-to-head against Pakistan has now evened out at 5-5 with their knockout wins coming to 3-2. Here is a timeline of Pakistan's horror against India in ICC events during the last decade.

Pakistan started the decade with a thrilling two-wicket win in the quarterfinal of the ICC Under-19 Cricket World Cup clash in Nelson. India reached 114/9 in 23 overs and Pakistan just crossed the line. In the 2011 World Cup semi-final at Mohali, Sachin Tendulkar's charmed knock of 85, which saw four dropped catches and a dodgy LBW call overturned, resulted in India securing their fifth straight win in the tournament with a 29-run victory. India started their dominance from Mohali and it continued as the decade wore on. In the 2012 World T20 clash in Colombo, L Balaji took 3/22 and Virat Kohli blasted 78 as India won by eight wickets. In the same year, India's Under-19 team started to turn the tide in their favour as they won a low-scoring thriller in Queenstown against Pakistan as they won by one wicket thanks to the contributions of Baba Aparajith and Sandeep Sharma. 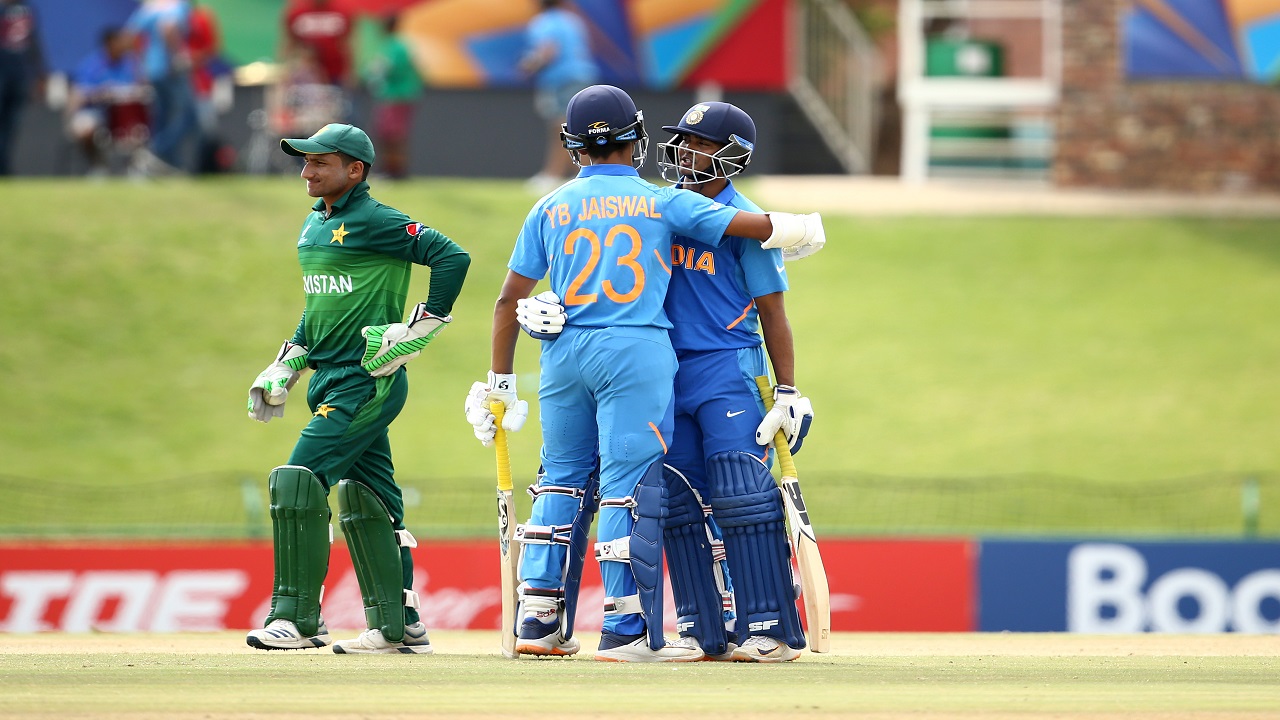 Yashasvi Jaiswal hit a century and also became the leading run-getter in the 2020 Under-19 World Cup. (Image credit: Getty Images)

In the 2013 Champions Trophy clash, India finally broke their hoodoo in the tournament. In a rain-curtailed match, India won by eight wickets. In the 2014 World T20 clash in Dhaka, Pakistan were restricted to 130/7 as India chased down the target thanks to Kohli and Suresh Raina to win by seven wickets. In the 2014 Under-19 World Cup, Sanju Samson and Sarfaraz Khan's fifties and aided by Deepak Hooda's 5/41 gave India a 40-run win. In the 2015 World Cup clash in Adelaide, India extended their advantage to 6-0 against Pakistan thanks to Kohli's century and 4/35 from Mohammed Shami. India continued to pound Pakistan in ICC events as they registered a six-wicket in the 2016 World T20 encounter in Kolkata thanks to Kohli's unbeaten 55.

India started the 2017 ICC Champions Trophy in style by hammering Pakistan by 124 runs in the league clash in Edgbaston with Rohit Sharma, Kohli and Shikhar Dhawan all hitting fifties. However, in the final, Pakistan had their revenge. Fakhar Zaman scored a century and Mohammad Hafeez hit a quick fifty. Mohammad Amir then took the wickets of Kohli, Rohit and Dhawan as Pakistan won by 180 runs to clinch the Champions Trophy for the first time.

However, normalcy was soon restored. India annihilated Pakistan by 203 runs in the semi-final of the 2018 ICC Under-19 World Cup in Christchurch thanks to Shubman Gill's century and a fiery spell of 4/17 from Ishan Porel. In the 2019 World Cup clash in Manchester, Rohit blasted 140 and Kohli hit a fifty as India registered a comprehensive 89-run win to extend their World Cup advantage to 7-0. With the win by 10 wickets in Potchefstroom, India have ensured that their dominance, especially when it comes to men's ICC events is total over Pakistan.