The India Vs Sri Lanka Twenty20 International In Barsapara Stadium Guwahati Was Abandoned Because Water Seeped In Through The Covers And It Resulted In A Wet Pitch.

The India vs Sri Lanka match in Barsapara was abandoned as water seeped into the pitch which resulted in damp patches at both ends. (Photo Credit: BCCI Twitter)

There was a crowd of 35000 waiting at the Barsapara stadium in Guwahati. The venue was hosting India's first match of the new decade. It was a great moment for a venue and a city that was starved of cricketing action. In the old Nehru stadium, India had played nine games in a 27-year period while Barsapara, which was created despite a severe cash crunch and lack of corporate sponsors finally got a chance to host a game in 2017. Guwahati was slowly recovering after the intense anti-Citizenship Amendment Act in December. The city was desperate for some good news and this Twenty20 International contest seemed to be the tonic. Instead, they got a farce of epic proportions and it highlighted the 'negligence' of the groundstaff. The build-up of the match was dominated by rain.

It had rained in the afternoon but as the evening approached, things brightened. Fans thronged to the stadium. India won the toss and chose to bat with Virat Kohli including Jasprit Bumrah, India's ace pacer who was sidelined for four months due to a stress fracture on his back. However, as soon as the toss was done, the rain started. A 45-minute downpour, combined with hail meant that the match was entering a territory where overs would be lost. An inspection was scheduled at 8:00 PM but suddenly, it was pushed to 9:00 PM.

That was the first alarm bell. Something had gone wrong. It would emerge that the water seeped through the covers used to protect the pitch area and there were damp patches on both sides of the wicket in addition to the bowler's run-up. The groundstaff were desperate, employing a vacuum cleaner, a hair dryer and a steam iron to dry the wet patches but they were fighting against time. The cut-off time for a five-over shootout was 9:46 hrs IST. There was no announcement for 10 minutes after the cut-off and when the official news came that the game was abandoned, serious questions have been asked about the inability.

The reactions ranged from perplexing to furious both on the ground and on social media. Former cricket Aakash Chopra pulled no punches when he labelled this mistake a 'school-boy error'. "It's nothing but a school boy error. The 22-yard is a sacrosanct place and they have left a few holes in the cover as some amount of water seeped in. It is some amount of negligence. You can't have an excuse at this level," Chopra said angrily.

On social media, the Indian fans were dismayed with the nature of the abandonment. Across the border in Pakistan, there was massive trolling of the BCCI with the prominent theme being the world's richest cricket board had to resort to things like a hair-dryer, vacuum cleaner and steam iron to dry out the wet patches. The reaction coming from Pakistan, although venomous, is justified. However, what Pakistan and their cricket fans conviniently ignored was the nature of their own pitches and outfield, with the Rawalpindi Test against Sri Lanka recently a case in point in which lack of sun and light resulted in just 23.4 overs being bowled in three days.

In the last decade or so, there have been several farcical abandonments in cricket. The Test between India and West Indies in Port of Spain in 2016 resulted in just one day's play and the remaining four days were abandoned due to a wet outfield. The farce was that it had rained only on one day and the remaining days were sunny. But due to the inability of the outfield to drain out the excess water, the game was abandoned in bright sunshine. Ditto for the Durban Test in the same year between South Africa and New Zealand. Only one day's play was possible and the remaining days resulted in no play in bright sunshine due to the pounding the outfield got due to the rain. 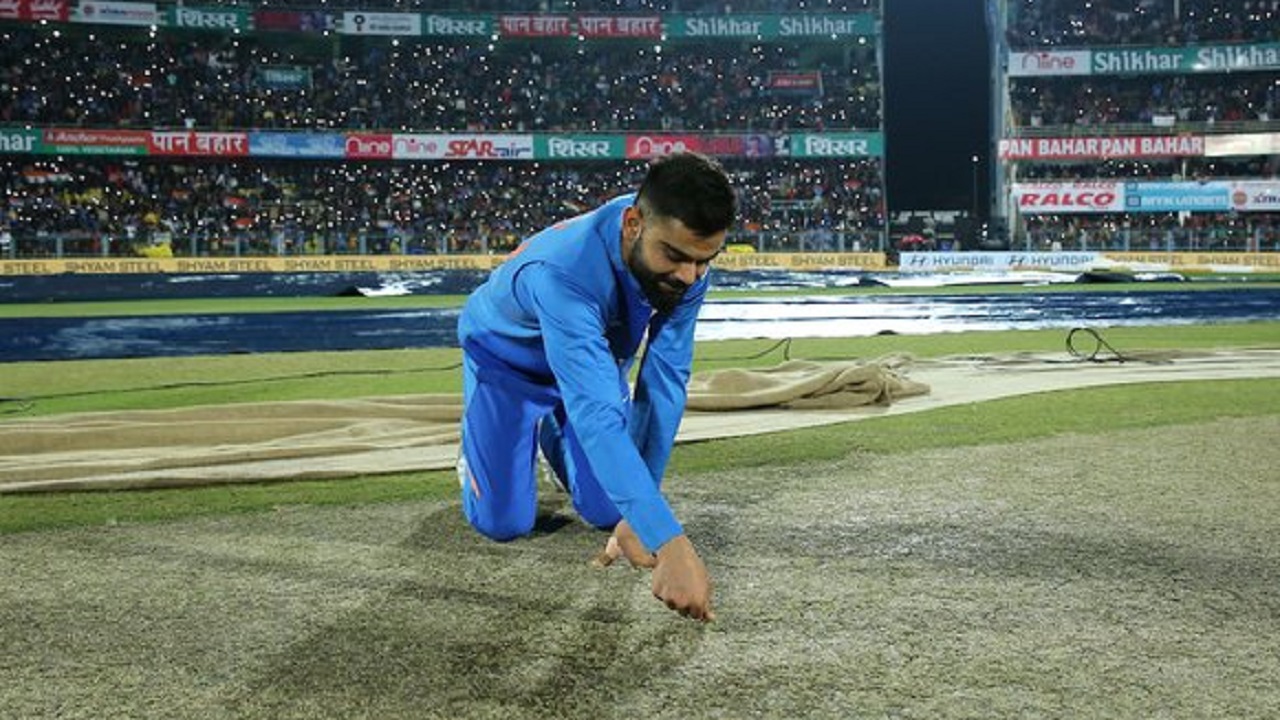 There was no rain for close to three hours but the wet patches on the pitch refused to dry. (Image credit: BCCI Twitter)

Even in India, they had a lesson which should have been a warning for Barsapara. The 2015 Twenty20 International between India and South Africa at the Eden Gardens was abandoned due to a wet outfield. The ground was not fully covered and the wet patches on the outfield resulted in the game not being played. Following the furore, Sourav Ganguly, the current BCCI chief who was then the head of the Cricket Association of Bengal, decided that the entire Eden Gardens outfield would be covered just like how they do in Sri Lanka.

The Sri Lanka way of covering the entire outfield is now been seen as a model to preserving outfields, pitches and ensuring the game is not affected totally. The drill in Sri Lanka in pretty simple. The groundstaff assemble near the boundary ropes and are prepared to get the covers onto the pitch and outfield. They get advanced warning about the weather system and once they know that rain will lash the outfield, they inform the umpires who tell the players to go off. Within five minutes, from all over the boundary, the groundstaff converge from all sides and cover the entire outfield and pitch. There is an additional layer of covers that come in and tyres are fitted at the end of each cover to ensure that they are not blown away with the wind. The double layer of superimposed covering ensures that water does not seep into the pitch in any form. Once the rain relents, the ground is ready for use within 10-15 minutes.

Roshan Abeysinghe, a Sri Lankan commentator, gushed in pride about the Sri Lanka groundsman when he commented on the situation in Rawalpindi during the Pakistan Test. "It's a technique (in Sri Lanka), they cover the entire ground. They cover it in a way that they just keep transferring the water, it comes to the edge of the boundary and they get rid of the water. And then the super-soppers come into play. Then you can get rid of all these areas and then the outfield is generally dry. That, we don't see here. I don't have to talk about the Sri Lankan groundsmen, they are the best in the world," Abeysinghe told the host broadcasters.

However, for the moment, one can only feel sorry for the cricket fans in Guwahati. The BCCI, in particularly, the Assam Cricket Association must apologise to the fans and ensure that this is never repeated again. This abandonment, that too in Guwahati, will only enhance Virat Kohli's sentiment of playing Tests at certain venues more ammunition. It would be a shame for Guwahati's cricket fans if they are robbed of international cricket for negligence by a few.