Rohit Sharma Blasted 60 But Retired Hurt But Some Brilliant Bowling From Jasprit Bumrah And Navdeep Saini Allowed India To Claw Back And Register A Seven-run Win To Sweep The Series 5-0 And Create History.

Shivam Dube had been blasted for 34 runs in one over by Tim Seifert and Ross Taylor. Both batsmen stitched a 99-run stand and Seifert notched up his third fifty. It seemed New Zealand were on course to break their losing streak and salvage some pride. Then, as in the previous matches, New Zealand failed to press home the advantage. Seifert chipped a slow ball from Navdeep Saini to fall for 50 and India capitalised on the opening. Shardul Thakur took two wickets and Jasprit Bumrah delivered a magnificent 18th over. Ish Sodhi harboured hopes of an unbelievable third Super Over when he launched Thakur for two big sixes but the bowler held his nerve and India won the fifth and final Twenty20 International at the Bay Oval by seven runs to become the first nation in history to achieve a 5-0 whitewash in a bilateral Twenty20 International series.

Before the start of the series, New Zealand had an 8-3 advantage against India. After five matches, India have levelled it 8-8 and they are now the only team in T20I history to have an even or positive win-loss ratio against all sides in this format. If there were two major moments which showed the force was with India despite the Dube debacle, it was Sanju Samson's brilliant effort in the field in the ninth over bowled by Thakur. Ross Taylor launched a length ball to deep midwicket but Samson's acrobatic effort resulted in a six being prevented and more importantly, it saved four runs for the side. The other factor was yet another expensive display by Tim Southee. On a surface where most bowlers conceded just under six, with the exception of Mitchell Santner who conceded nine runs per over, Southee's 14 runs in the 16th over and 15 in the final over resulted in figures of 4-0-52-0 for the New Zealand skipper. Those 29 runs, combined with Southee's missing mojo in death overs bowling proved to be crucial in the outcome.

New Zealand seemed to have pulled things back after Rohit Sharma retired hurt following a blazing fifty. On a hard pitch at the Bay Oval, India chose to bat but Sanju Samson, who opened with KL Rahul, fell cheaply again to Scott Kuggleijn. Rahul, though was in his elements and he targeted Southee with a six and two fours. Rohit got going with a four off Hamish Bennett while Rahul was class personified as he lofted Kuggleijn inside out over deep extra cover. The partnership crossed fifty and Rohit upped a gear by blasting Santner for a six and a four. Rohit neared his fifty with a six and both batsmen neared fifties. However, Bennett sent back Rahul with a legcutter that stuck on the wicket for 45. 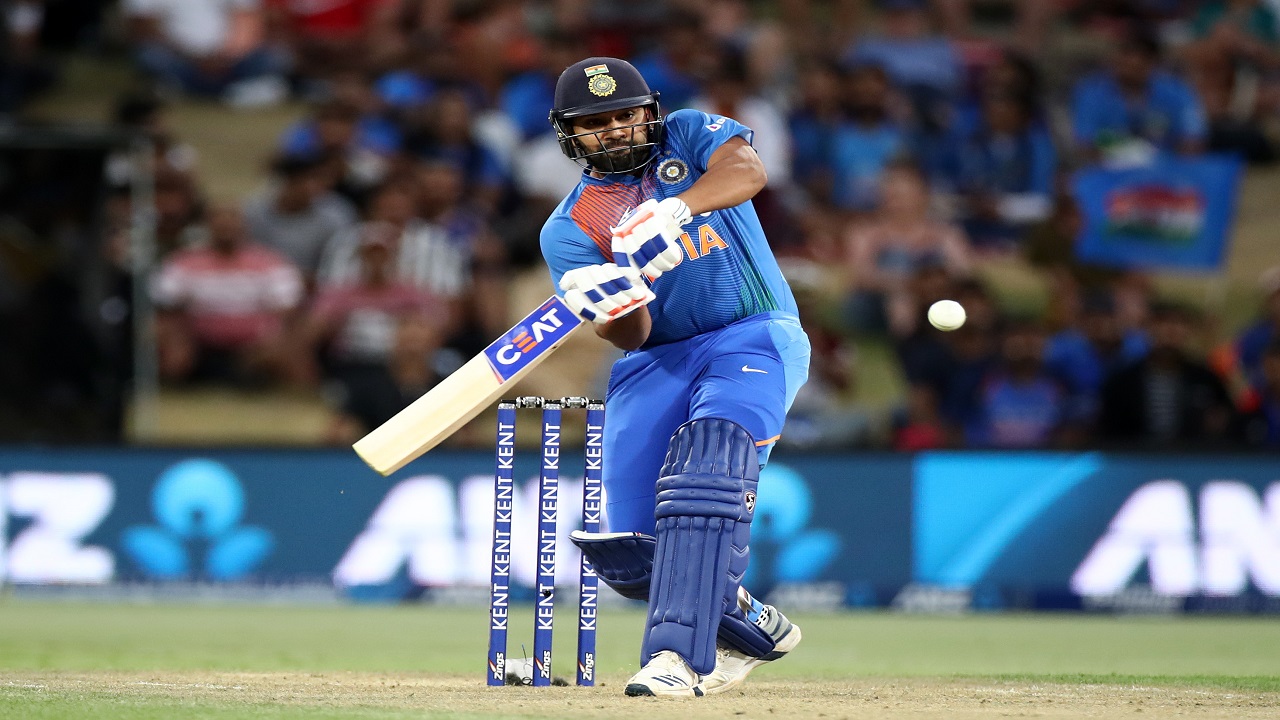 Rohit Sharma hit his 21st fifty but he retired hurt due to a calf injury. (Image credit: Getty Images)

Shreyas Iyer struggled for timing and although he hit Santner for a massive six, he was struggling. Rohit notched up his 21st fifty and Iyer hit another six but the Indian skipper was struggling with a calf injury. After another six off Ish Sodhi, Rohit retired and India lost momentum in the death overs. After just eight runs in two overs, India seemed to have ended up with a below-par score but Manish Pandey slammed a six and four to help India past 160.

The struggles of New Zealand in the series has been they have been unable to hold their head in a pressure situation. Martin Guptill was trapped LBW for 2 but replays showed that the ball was missing the stumps. Had Guptill or Colin Munro had the confidence to go for the review, they would have succeeded in overturning the decision but when luck goes against a team, it goes completely against. Munro slammed a six and a four off Washington Sundar but the bowler had his revenge as a quicker ball deflected off his pad to crash into leg stump. When Tom Bruce fell for a second consecutive duck, New Zealand faced an uphill struggle.

However, Seifert and Taylor, playing in his 100th T20I, rebuilt the innings and it all culminated in the 34-run over bowled by Dube. However, New Zealand let the advantage slip when Saini sent back Seifert and India applied the pressure. Taylor tried to keep the match alive with a fifty but when Thakur took two wickets in the 17th over, the game was all but up. When Saini sent back Taylor who chased a full and wide ball, it almost ensured no third consecutive Super Over. Sodhi kept the match alive mathematically but in the end, New Zealand have no one to blame but themselves.

A 10th bilateral series win for Kohli in T20Is, that too a 5-0 whitewash against a side which India had struggled in the past, is a welcome boost of momentum in a World T20 year. After the match, Tim Southee pointed out, "I don't think it is a massive gap, the scoreline does suggest that, but we only need to do the smaller things better." Only if New Zealand had gotten over the line in the two matches in Hamilton and Wellington as well as holding their head in Bay Oval, the scoreline could have been in New Zealand's advantage. However, they fell prey to T20s mantra that the game is decided on small margins and in this case, New Zealand did not get it right.