Anya Shrubsole Took Three Wickets As The Indian Cricket Team Once Again Collapsed In The Middle Overs While Natalie Sciver Slammed A Fifty As England Won The Tri-series Twenty20 Encounter Against India By Four Wickets At The Junction Oval In Melbourne.

In the 2017 Women's World Cup final against India at Lord's, Anya Shrubsole bowled an inspired spell to take 6/46 as the Indian women's team suffered a catastrophic collapse to lose by nine runs and squander the opportunity to win the ICC Women's World Cup Trophy for the first time. Three years later, at the Junction Oval in Melbourne, Shrubsole was at it again and she might have dented India's prospect of even reaching the final of the Women's Twenty20 International tri-series involving Australia. Shrubsole took 3/31 and Harmanpreet Kaur's India lost four wickets for 40 runs. Natalie Sciver then hit fifty as England held their nerve and won the match by four wickets on Friday.

England chose to field but Smriti Mandhana started confidently again. The left-hander launched a six over deep square leg and then thumped a four off Sophie Ecclestone and she showed her intention with another four off Katherine Brunt. Mandhana was unstoppable in the powerplay as she creamed two fours off Shrubsole, one to fine leg and the other to long on. Mandhana notched up another boundary off Ecclestone but the bowler had her revenge when Shafali Verma was bowled for 8. 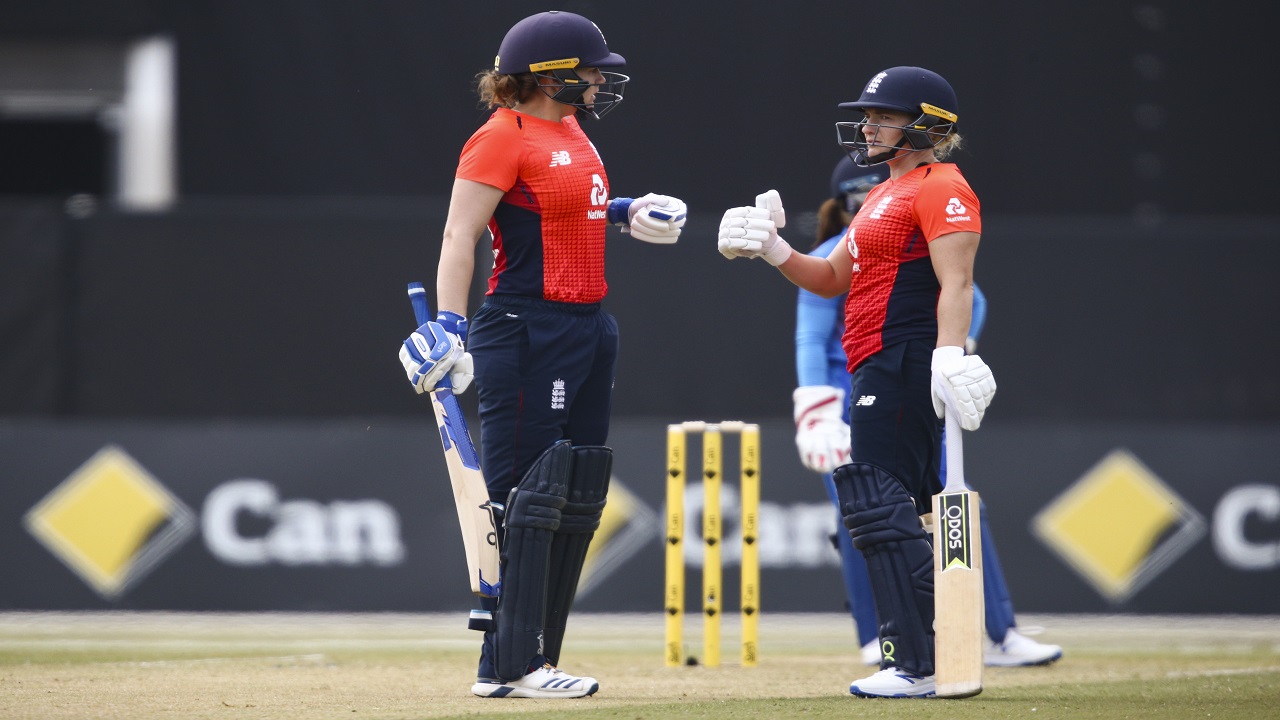 Natalie Sciver hit a fifty to guide England in a tense run-chase against India at the Junction Oval. (Image credit: Getty Images)

Mandhana, though, continued on her merry ways and she neared her fifty with a four off Natalie Sciver. However, Brunt got the big wicket of Mandhana for 45 but Jemimah Rodrigues looked to carry on the good momentum with two boundaries off Freya Davies. The middle overs, though, was the period when England applied the pressure. Shrubsole had Rodrigues stumped for 23 while Brunt got the wicket of Veda Krishnamurthy. India relied on skipper Harmanpreet Kaur to give a death overs boost but Shrubsole sent her back for 14 off 23 balls. India benefited in the final over when Shrubsole bowled five wides and Deepti Sharma hit a boundary but India still finished on an under-par 123/6.

England started disastrously when Amy Ellen Jones was sent back by Rajeshwari Gayakwad for 1. Danielle Wyatt struck two boundaries to revive the England chase but Radha Yadav removed Wyatt and suddenly, the match was becoming interesting. When Brunt was run-out, England were 28/3 and India held the upper hand. However, Sciver eased the pressure when Deepti Sharma conceded five wides and the batter hit a boundary as England reached 39/3 in the powerplay.

Heather Knight and Sciver made steady progress and tried to build a steady partnership but Gayakwad came into the attack and struck with the first ball in her second spell by getting rid of Knight for 18. Sciver, though, continued to find the boundaries and Fran Wilson also helped her ease the pressure by rotating the strike on a regular basis. Sciver notched up a gritty fifty with a six off Gayakwad but the bowler sent her back immediately as the match continued to be tense. When Tammy Beaumont was run-out, England had neared the target and Lauren Winfield hit the winning runs as India stayed at the bottom of the table.