Ishant Sharma took 5/68 and this was his 11th five-wicket haul and third in New Zealand but the hosts managed to take a lead of 183 runs. (Photo Credit: Getty Images)

Ishant Sharma was in danger of missing the Wellington Test against New Zealand after suffering an ankle injury during the Ranji Trophy clash at the Kotla. The Delhi pacer even missed the warm-up game in Hamilton but he was slowly building up to full fitness by bowling at full tilt for 90 minutes to the batsmen in the side nets. On day 2, Ishant Sharma was the best bowler in the Indian cricket team as he took out the wickets of Tom Latham, Tom Blundell and Ross Taylor. On day 3, Ishant Sharma got the wicket of Tim Southee and he finished with the scalp of Trent Boult as he took his 11th five-wicket haul to bowl New Zealand out for 348.

Apart from this being Ishant's 11th five-wicket haul, the India pacer notched up his third five-wicket haul in New Zealand and his second in successive Tests at the Basin Reserve. In 2014, he had taken 6/51 to bowl New Zealand out for 192 but the Test was more remembered for Brendon McCullum's stupendous triple century. Even in this Test match at the Basin Reserve in 2020, Ishant's haul was bittersweet as New Zealand's lower order wagged with 132 runs in the extended session and put Kane Williamson's side in command with a 183-run lead.

India had a great start on day 3 when Jasprit Bumrah broke his wicketless rut by getting the wicket of BJ Watling in the first ball of the day. Colin de Grandhomme managed to get a decision overturned as he was trapped in front by Bumrah. India wasted their review again as they appealed for a catch and there was no edge. With India desperate to restrict New Zealand's lead to under 100, they were going for the kill but Kyle Jamieson, like he did in Auckland, hurt India with the bat this time. Jamieson pulled a short ball from Mohammed Shami to the deep midwicket grassbanks for his first six and he countered the short ball well with a pull off Ishant to the leg side boundary. 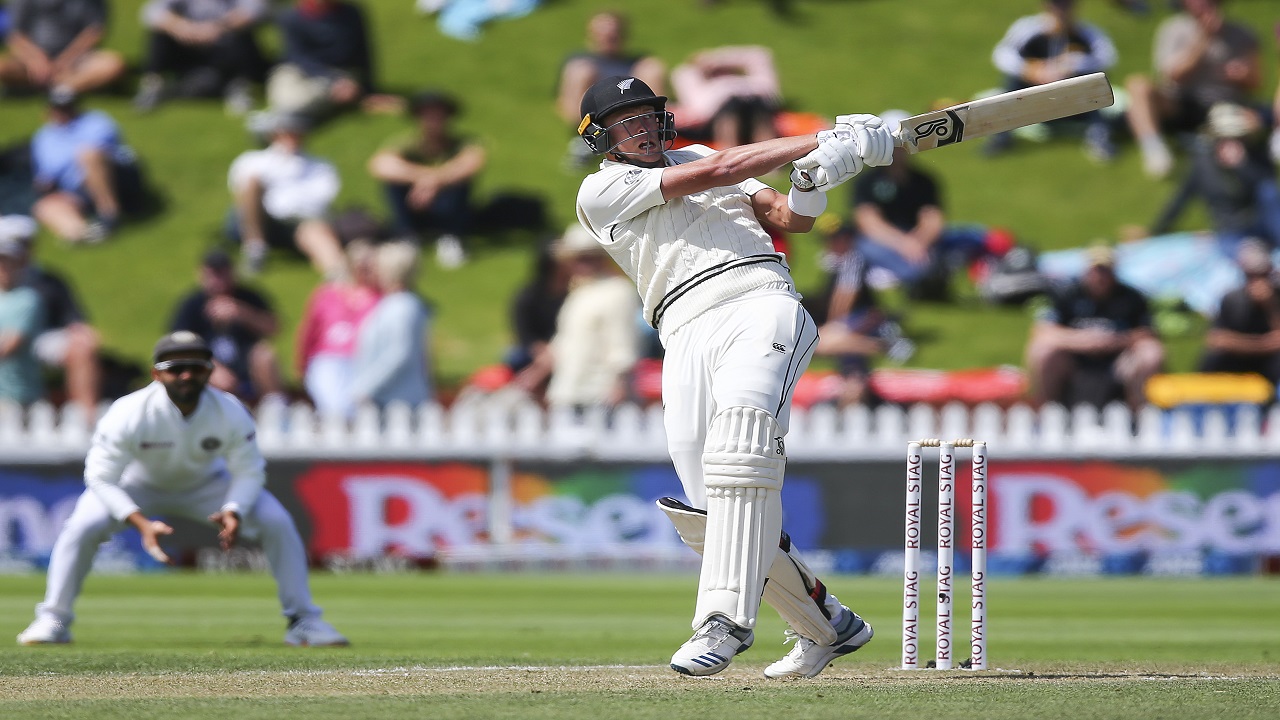 Kyle Jamieson smashed four sixes in his knock of 44 as New Zealand had a sizeable lead in Wellington. (Image credit: Getty Images)

De Grandhomme joined in the fun by hitting Bumrah for two fours once the second new ball was taken and India did themselves no favours when Shami dropped Jamieson on 15. The six foot eight inch pacer continued to hurt Shami as he top-edged the pull shot but it sailed over fine leg for a six. In Ravichandran Ashwin's 23rd over, Jamieson was unleashed as he smoked two sixes in one over. However, Ashwin had his revenge when Jamieson top-edged a flighted delivery and Hanuma Vihari took the catch at widish mid on.

De Grandhomme looked good for a fifty but Ashwin struck again when he gloved a loopy ball that kicked up from the deck and Rishabh Pant took a good catch. India's misery though was far from over. Trent Boult decided to have fun as he smashed boundaries at will. Boult smashed two boundaries off Ishant and he slogged a lofted shot to long on for a six off Ashwin. Boult hit another four off Shami but in trying to be too aggressive, he top-edged a short ball by Ishant and was caught by the keeper as New Zealand gave themselves a good chance of winning the Test.