Jofra Archer, The England Pacer Who Has Often Predicted Things Much Before The Event On His Twitter Timeline, Apparently Predicted The Coronavirus Lockdown Two Years Ago.

Jofra Archer predicted the coronavirus and the lockdown a couple of years ago while he even predicted a World Cup win and the margin accurately. (Photo Credit: Getty Images)

Prime Minister Narendra Modi on Tuesday announced a pan-India lockdown for 21 days in order to combat the Coronavirus pandemic. While the annoucement might have come on expected lines for some people and a shock to many, for one individual, he actually predicted it and his prediction was spot on. Jofra Archer, the England pacer, had apparently predicted something like this two years ago. Once again, an instance has come where Jofra Archer has predicted the future and it has eerily come out true. In a tweet that has gone viral, Jofra Archer said, "Three weeks at home isn't enough." The date was 23rd October 2017 and the time was 7:13 AM from Barbados.

Apparently, PM Modi's announcement of 21 days equals three weeks. This is not the first time that Jofra Archer has done a Nostradamus to the world and stunned the entire social media universe with his Tweets. Apparently, he had also predicted the coronavirus outbreak six years ago with his cryptic tweet. In that, he wrote, "There will be no place to run. That day will come." The tweet was apparently done on August 20, 2014 and the time was 4:13 PM. 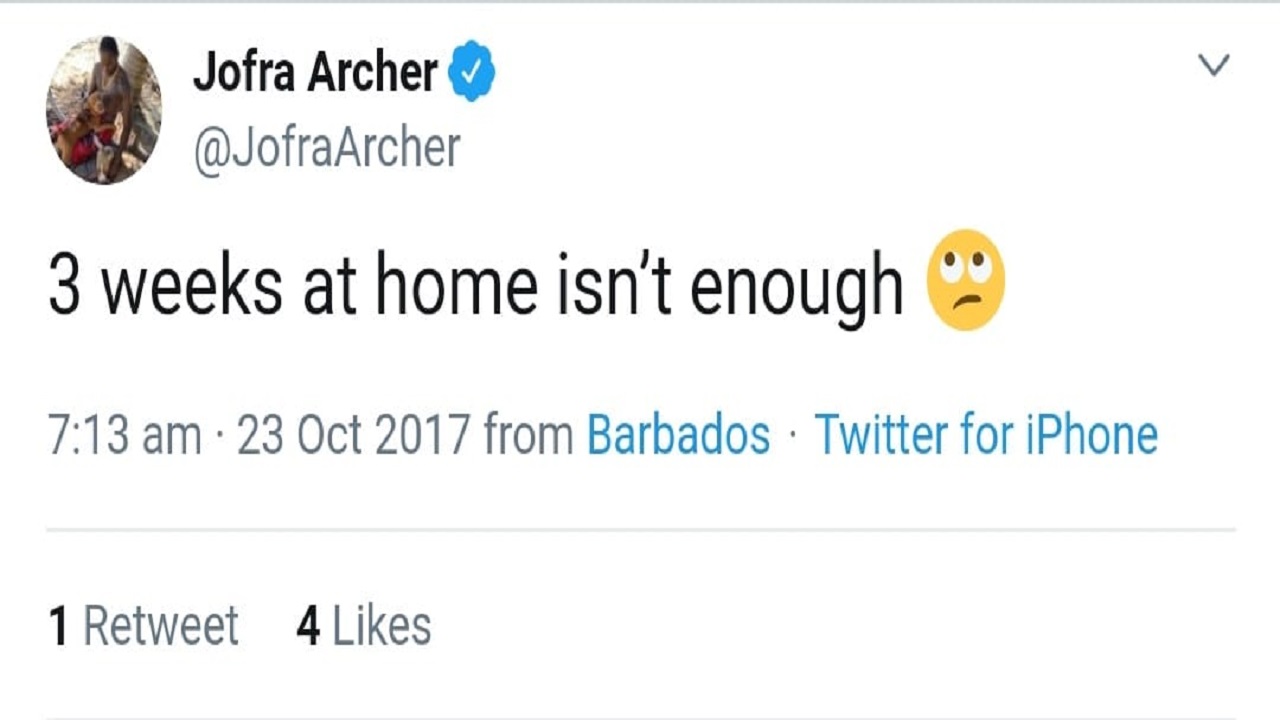 During the 2019 World Cup final, the match between England and New Zealand at Lord's went to the Super Over and even that was tied. England were declared the winners due to a superior boundary count. However, Jofra Archer had predicted this result four years ago. In a tweet that went viral, Archer had predicted the Super Over with a simple tweet on July 5, 2015. However, the following tweets were even more eery when it came to coincidence. In a tweet on April 14, 2013, Archer wrote 16 off 6 and that was the exact runs needed by New Zealand to win the World Cup. In following tweets, Archer tweeted "How New Zealand lost this?" on March 25, 2014 while he followed it up with "What stupid rule is this" on August 3, 2015.

The Euro 2020 football tournament has been postponed to 2021 while the Tokyo Olympics was postponed to the summer of 2021 due to the COVID-19 pandemic. Cricket has also not escaped the wrath of the coronavirus, with all international series postponed. There is a massive cloud hanging over IPL 2020 which was postponed to April 15 but the developments in the last couple of days with regard to the coronavirus is not a good sign.

On Tuesday, Prime Minister Narendra Modi announced a 21-day lockdown across India in order to contain the coronavirus pandemic. The lockdown, which began on midnight March 24 will last till April 14 and that all but seals the fate of IPL 2020. When the BCCI had postponed the IPL to April 15 earlier this month, it had said hosting the tournament would only come into the picture if the situation around the pandemic improves. However, it has only worsened since then with cases surging towards the 500-mark in India.