Kane Williamson Smashed 89 And Helped New Zealand Take A Lead In Excess Of Fifty On Day 2 Of The Wellington Test At The Basin Reserve But Ishant Sharma Kept Fighting For India With A Haul Of Three Wickets.

Kane Williamson hit 89, his 32nd fifty but he missed out on a century as New Zealand stretched their lead to 51 at the end of day 2 of the Wellington Test. (Photo Credit: Getty Images)

Kane Williamson stamped his class at the Basin Reserve as he smashed 89 but Ishant Sharma dazzled in Wellington with three wickets as New Zealand ended day 2 of the Wellington Test 51 runs ahead. The hosts continued their good job at the Basin Reserve earlier in the day when Tim Southee and Kyle Jamieson took four wickets apiece. Ajinkya Rahane looked firm at the start but he contributed to an unfortunate run-out of Rishabh Pant and only some slogging from Mohammed Shami saw India go past 150. On a pitch that was offering some movement but easing out as compared to the first day, it was Ishant, who was in doubt for the series due to an ankle injury which he sustained in the Ranji game that kept India in the contest.

Tom Latham and Tom Blundell survived the testing spell from Jasprit Bumrah and Ishant Sharma before the lunch break but on the resumption, Ishant strangled Latham down the leg side with a short ball. Rishabh Pant, the keeper, did not appeal but the umpire raised the finger. Williamson started slowly and he got going with a couple of boundaries off Bumrah. The New Zealand skipper looked at ease on the wicket but Blundell was struggling to cope with the movement and extra bounce off the wicket but he hung in. Williamson caught up with Blundell but Ishant struck again, removing Blundell with a full ball that nipped back in and breached his defences for 30.

Ross Taylor, getting a standing ovation from the Basin Reserve crowd for becoming the first man to play 100 matches in all formats, signalled his confident intent by launching Ravichandran Ashwin into the grassbanks at deep midwicket but he reverted to caution as his attempted upper-cut to a short and wide ball from Ishant ballooned to fine leg for a streaky boundary. Before the tea break, Taylor showed his class by driving Jasprit Bumrah to the deep extra cover fence. ollowing the interval, Taylor grew in confidence by lap sweeping Ashwin to the fine leg boundary. Taylor then glanced Mohammed Shami for a boundary and then caressed a drive to the deep extra cover fence. The right-hander then entered the 40s in streaky fashion when he inside-edged a short ball from Bumrah which just missed the stumps. It looked like luck was favouring Taylor and he looked good for a good score but on 44, Ishant got a short delivery to leap off the deck sharply and Taylor could only fend it to Pujara at slip.

Williamson Continues On His Merry Ways

At the other end, Williamson was in sublime touch as he notched up his fifty by dancing down the track to Ashwin and lofting him to deep midwicket for a boundary. With Taylor at the other end, Williamson looked in total control and soon, New Zealand had the lead. Following Taylor's dismissal, Williamson also slowed down and he entered the 80s by glancing Bumrah to the fine leg boundary. However, New Zealand's prospects for a big lead were shattered when Mohammed Shami got a full ball to stop on Williamson outside off and the skipper could not check his drive. He holed out to substitute Ravindra Jadeja who took a diving catch at short extra cover to fall for 89. Having taken Williamson, India found a spring in their step. 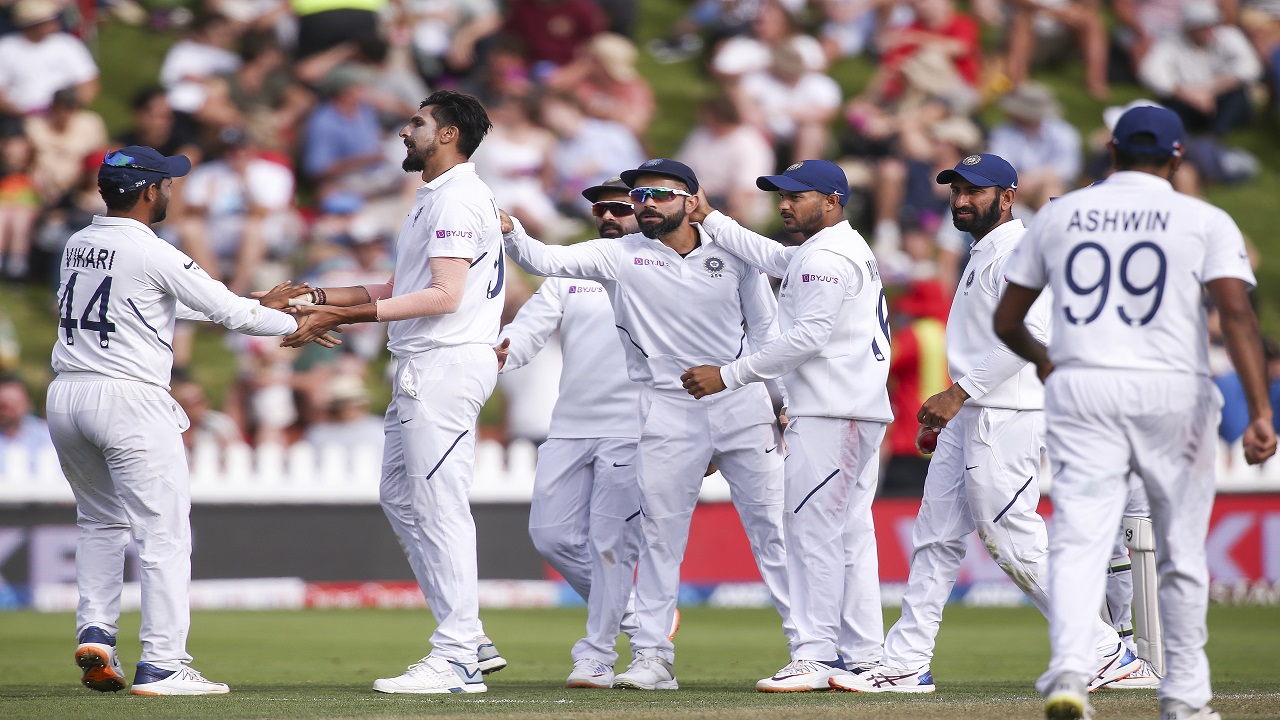 Ishant Sharma picked up three wickets at the top to keep India in the hunt. (Image credit: Getty Images)

Ashwin, who was subdued till now, used the Basin wind to generate generous drift. With the pitch also assisting spin, he got the wicket of Henry Nicholls with a ball that drifted in on off stump and spun away as the edge was taken low by Kohli. BJ Watling and Colin de Grandhomme ensured New Zealand crossed 200 and the lead swelled to fifty but India would be happy with the fight they showed on day 2 after the batsman surrendered. Resuming at 122/5, Rishabh Pant started the day with a bang as he mauled a big six off left-arm spinner Ajaz Patel and it looked like India would bat confidently under sunny skies. However, they shot themselves in the foot with some careless cricket. Disaster struck when Pant was run-out needlessly.

Rahane tapped a length ball from Tim Southee to backward point and set off for the single but Pant was not interested. In the end, he had to put in the hard strides but a direct hit from Ajaz Patel sent Pant back on his way. Southee struck next ball as he cleaned up Ravichandran Ashwin with a full ball that nipped away late. Southee dealt India a body blow as he got rid of Rahane for 46. The bowler delivered a length ball from wide of the crease and got it to hold it's line outside off, a bit of extra bounce from the deck saw Rahane trying to leave the delivery but he could not do it totally and BJ Watling took the catch to send back the last recognised batsman for India. Ishant and Shami decided to go after the bowling as India eyed a total in excess of 200.

Shami top-edged the lofted shot off Tim Southee but Kane Williamson, undone by the Basin wind, dropped a sitter at mid on. Shami continued to hit the aerial shots, with some just eluding the fielder but he managed to hit two fours off Southee. Shami's edges eluded the fielders as he raced to 21. However, Kyle Jamieson ended the fun as Ishant poked at a short delivery that climbed up outside off. Jamieson missed his fifer as Southee finally ended Shami's aggressive knock as India were bowled out for 165. a total well-under par.