Kyle Jamieson Was Handed A Debut In The Wellington Test Against India And The Six Foot Eight Inch Bowler Sparkled As He Got The Massive Wickets Of Cheteshwar Pujara And Virat Kohli To Put New Zealand On Top At The Basin Reserve.

Kyle Jamieson had a magnificent start to his Test career as he took the wickets of Virat Kohli and Cheteshwar Pujara at the Basin Reserve in Wellington. (Photo Credit: Getty Images)

Kyle Jamieson had made a mark on his ODI debut when he smashed 25 and shared a vital partnership with Ross Taylor to boost New Zealand in Auckland. With the ball, he got the wickets of Prithvi Shaw and Navdeep Saini to finish with 2/42 as New Zealand won the match and the series. The exploits of Kyle Jamieson earned him a Man of the Match award on debut. Looking at his exploits in the ODIs, Kyle Jamieson was picked in the New Zealand side to make his debut as Kane Williamson won the toss and chose to bowl on a green pitch at the Basin Reserve in Wellington on Friday. It was tough going for the Indian batsmen as the likes of Trent Boult and Tim Southee found enough help to trouble the Indian batsmen.

Prithvi Shaw tried to break the shackles by smashing two boundaries. However, Tim Southee gave New Zealand the early breakthrough when he squared up Shaw with a full ball that straightened late to breach his defences for 16. Cheteshwar Pujara was tasked with rebuilding the innings along with Mayank Agarwal. Trent Boult and Southee bowled for 10 overs when Williamson made the change in getting Colin de Grandhomme from one end and Jamieson from the other.

In his very first over, he troubled Pujara with some late movement and he reaped success in his third over in Test cricket. Jamieson bowled a short of a length ball at 130 kmph but he got the ball to nip away sharply. The height factor also played a part as the ball leapt alarmingly and Pujara could only edge it to BJ Watling, the New Zealand wicketkeeper to depart for 11. Virat Kohli, the Indian cricket team skipper and one of the key batsman in the team, came out and he got off the mark with a couple. However, that was when Jamieson struck a massive blow. 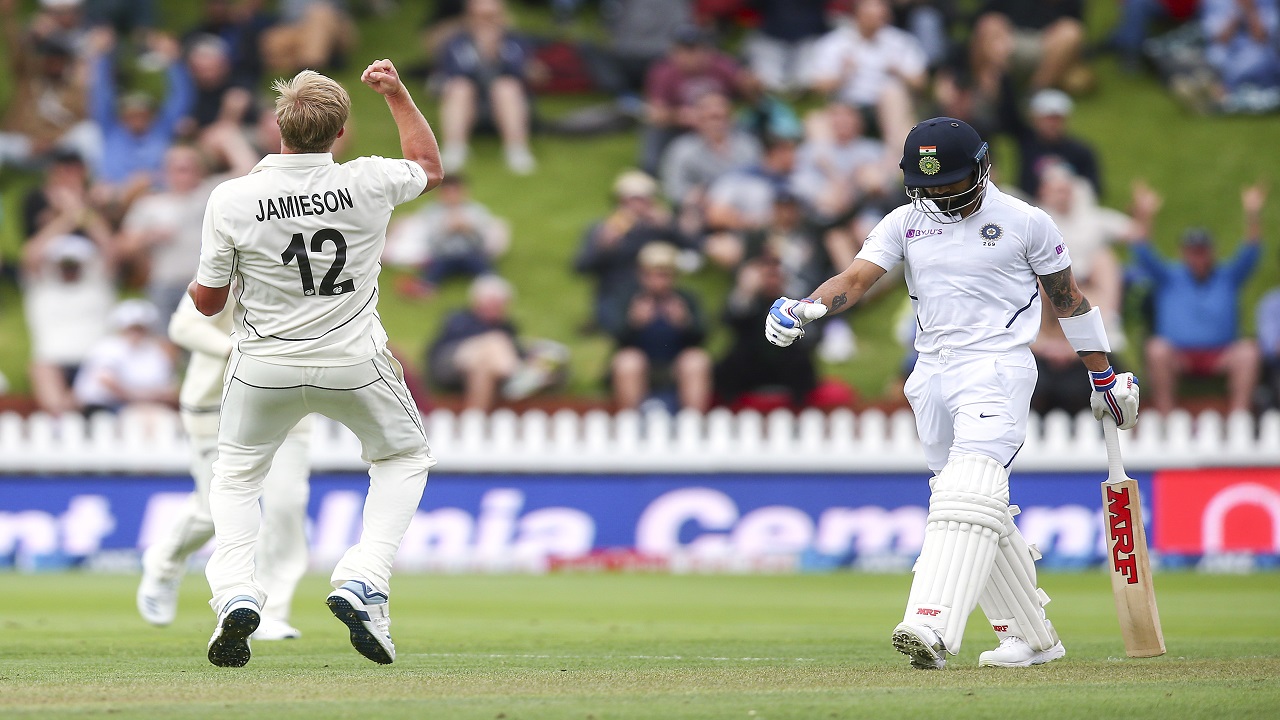 Kohli's weakness of pushing a wide delivery outside off stump, which was his undoing during the 2014 tour of England, came back to haunt him as Jamieson bowled a wide delivery outside off and Kohli chased after it to edge the catch to Ross Taylor, playing in his 100th Test match. Kohli fell for 2 and India were in dire straits. Agarwal found good support in Ajinkya Rahane and the duo set about to rebuild the innings. Agarwal looked in fine touch with a couple of boundaries as Boult bore the brunt.

Also Read | Virat Kohli, Most Expensive Drop Of The Century And The Nightmare Of The Basin

The left-arm pacer, who missed the limited-overs series against India due to a broken hand, leaked boundaries as both Agarwal and Rahane took a liking to his bowling. Both batsmen ensured India did not suffer any more jolts as they reached 79/3 at the lunch interval. The onus will now be on the middle order to rebuild for India after the exploits of Jamieson.