Kyle Jamieson, The Six Foot Eight Inch Pacer Who Made His Test Debut In The Wellington Test Against India, Got The Massive Wickets Of Virat Kohli, Cheteshwar Pujara And Hanuma Vihari To Leave India Reeling At The Basin Reserve.

Getting the wicket of Virat Kohli, one of the greatest batsman in the modern era, is a dream for every bowler. Getting the wicket of Kohli on debut is extra special. That is the feeling Kyle Jamieson is currently feeling after the end of the first day of the Wellington Test against India. The six foot eight inch pacer, who made his ODI debut against India in Auckland, had hit 25 and took 2/42 as he won the Man of the Match award in his very first outing. On day 1 of the Wellington Test, Kyle Jamieson sparkled on debut as he got the big wickets of Virat Kohli, Cheteshwar Pujara and Hanuma Vihari to finish with 3/38 to put New Zealand on top as India tottered at 122/5.

Kyle Jamieson struck in his third over when he got Pujara for 11 with a short delivery that nipped away and he exposed Kohli's weakness of pushing at a wide delivery outside off when the Indian skipper edged a full ball to Ross Taylor at slip. Things got better for Jamieson as he took a catch off Mayank Agarwal and then got rid of Hanuma Vihari for 7 with a full ball that nipped away to be caught by BJ Watling.

"It's still sinking in. The last couple of weeks have been pretty surreal as well. Pretty pleased and from a team perspective we're in a pretty good position as well. He's a pretty good batter and such a key to their line-up. To get him early was massive for us. To get a couple (including Pujara) early was where the emotion came from, certainly pretty special," Jamieson said.

No Weakness In Kohli

Kohli had a tendency to poke at deliveries outside the off stump during the 2014 tour of England. This resulted in James Anderson getting him out five times and he finished the tour with an average of 13.4 in the Tests and he managed just one fifty in the entire tour. Kohli is going through a similar lean patch, having managed just one fifty and falling cheaply for 2 as Jamieson lured him with a full ball outside off. However, the bowler was quick to dismiss that Kohli had a particular weakness. 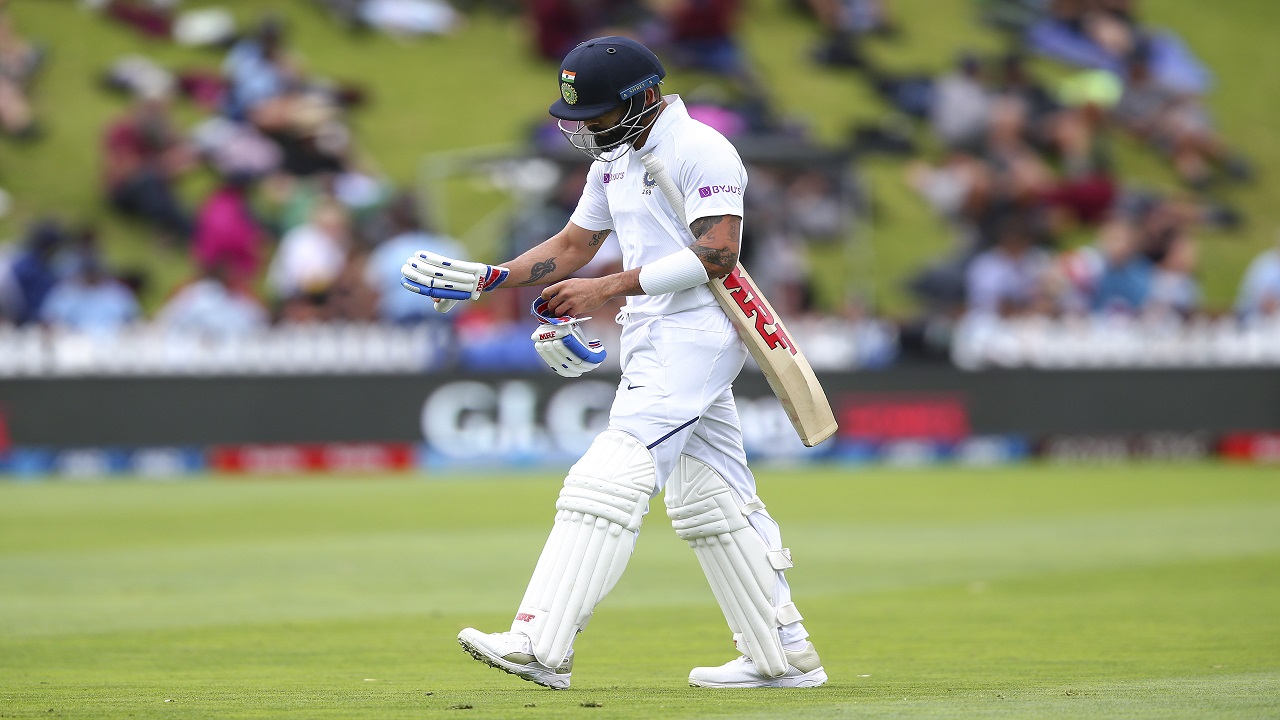 Virat Kohli has hit only one fifty in the entire tour so far in New Zealand. (Image credit: Getty Images)

"He's scored runs all around the world so to try and nitpick that would be not the smartest. With the assistance of the pitch it was how we would try to make him play and he's so strong on the stump line. I probably missed a little bit but managed to get the edge which was good," Jamieson said.

Jamieson credited Kane Williamson for easing his nerves as he gave him the right end to bowl to. With the wind assisting him, the bowler used his height advantage to extract something extra from the green wicket at the Basin.

"I tried to keep it simple the last few weeks. My role is to make them play and with that extra bounce bring them forward. There was a lot of assistance with pace and bounce and swing and seam. That simplifies was my gameplan to try to hit a good area. I stayed pretty relaxed which helped. With my height, I can afford to go a fraction fuller, especially out here with the extra bounce. I try to make guys commit to play off the front-foot. In that second spell, the first half of it, there were a lot of balls left on length. How do you commit them on the front-foot (is the key) and if it does swing or seam, you're in with a chance of bringing the edge in. It just comes from a steeper angle. I'm not as quick as some of the other guys around the world but still my short ball is a weapon from the height that I can bowl it. I try and use it as much as I can as well as keeping it fuller," Jamieson said.