Tom Latham Scored A Gritty Fifty But India's Bowlers, Led Admirably By Mohammed Shami And With Valuable Wickets From Jasprit Bumrah, Umesh Yadav And Ravindra Jadeja Ran Through The New Zealand Top Order Just Before Lunch On Day 2 Of The Christchurch Test.

After a tough opening day in the second Test at Christchurch, Virat Kohli's Indian cricket team roared back into contention with a superb display of bowling to run through the New Zealand top order. Tom Latham managed to hit fifty, but the Indian pacers, led by Mohammed Shami and with valuable strikes from Umesh Yadav, Jasprit Bumrah and Ravindra Jadeja reduced New Zealand to 142/5 at lunch on day 2 at the Hagley Oval. Tom Latham and Tom Blundell had shared a superb opening partnership of 63 and it seemed like a day of pain lay ahead for India. However, the Indian team came with focus and aggression and it reaped them rich rewards. Umesh Yadav broke the stand when he trapped Tom Blundell LBW with replays showing that the ball was clipping the stumps and hence, even the DRS could not save him.

Jasprit Bumrah delivered a major blow when skipper Kane Williamson edged a length ball wide outside off to Rishabh Pant, drawing very exuberant celebrations from Virat Kohli. Bumrah, though, was slightly guilty of giving away some free runs as he conceded eight byes. Ross Taylor got going with a boundary and Latham was solid at the other end with a boundary off Mohammed Shami. 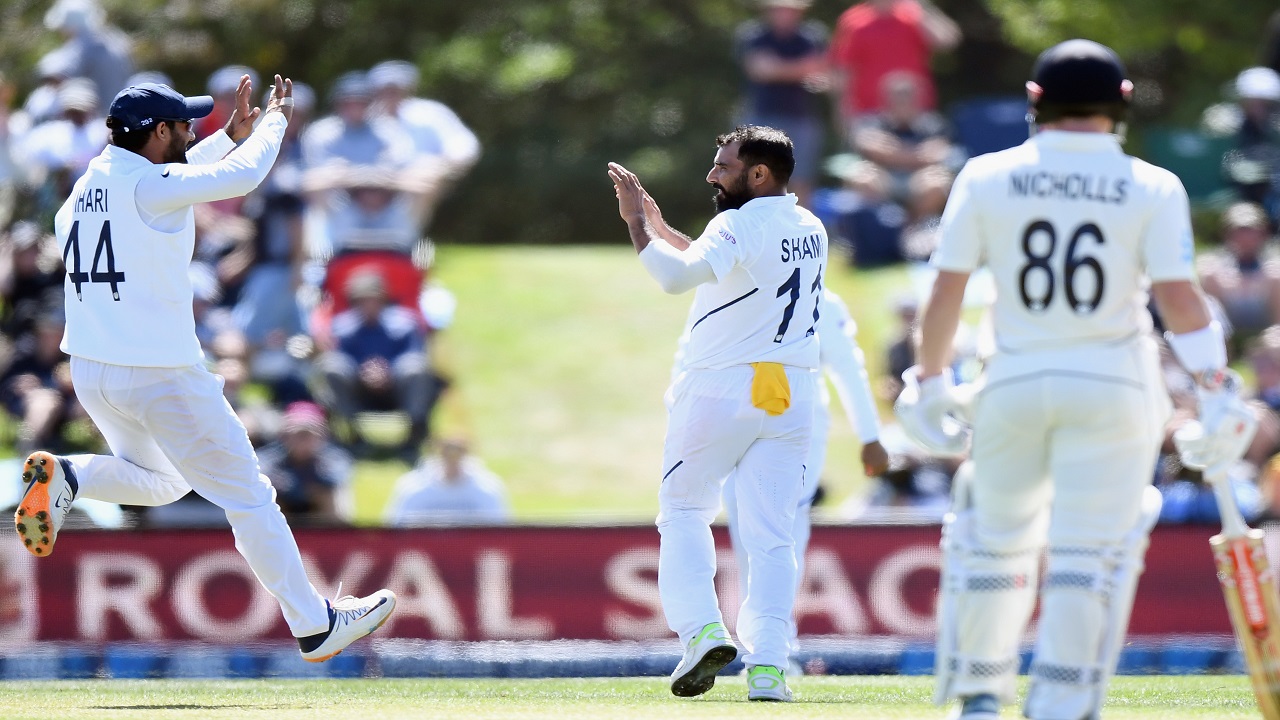 After the first drinks break, India ensured that the partnership could not prosper as Taylor suffered a big misjudgment and miscued the lofted slog to long on where Umesh Yadav ran back and took a tumbling catch.

Latham Fifty and Out

Latham neared his fifty with a boundary off Shami and then notched up the milestone with a streaky edge to third man. However, Shami produced one of the magic balls of the session as he got a fullish ball to angle back in and then nip in further off the seam as Latham trusted the bounce and decided to shoulder arms only for the ball to crash into the stumps.

Shami was on fire before the lunch break as Henry Nicholls edged a delivery which straightened outside off to Kohli. BJ Watling and Colin de Grandhomme managed to survive a nervy session, with de Grandhomme getting off the mark nervously when an inside edge just missed the stumps. The performance of the Indian pacers ensured that they finally had something to smile for in the Test series after being outplayed in every session at the Basin Reserve.