IND VS NZ Auckland T20I Live Cricket Score: Get All The Live Updates And Cricket Scores Of The First Twenty20 International Between India And New Zealand From Eden Park In Auckland.

Shreyas Iyer blasted his second fifty after a good spell from Ish Sodhi as India won the first T20I at Eden Park, Auckland by six wickets to take a 1-0 lead in the series. (Photo Credit: Getty Images)

21 series since the last World T20 in 2016. 14 series wins and three drawn series. Only four series losses in four years. Two of those losses came against West Indies, one to Australia and one to New Zealand. The consistency and performance of the Indian cricket team in the shortest format of the game has been impressive. In 2020, in a Twenty20 year punctuated by the marquee World T20 in Australia in October, India head into the tournament as the odds-on favorites. The upcoming five-match Twenty20 International series against New Zealand, which will be the first time India players a five-match series in this format, is the most important build-up for the World T20 for plenty of reasons.

15:46 hrs IST: Shreyas Iyer blasts two sixes and a four as he notches up his second fifty and gives India a thumping six-wicket win in the first match in Auckland to take a 1-0 lead in the series. This has been a clinical performance from India and it continues their dominance. New Zealand, one feels, were short by 15-20 runs.

15:34 hrs IST: Iyer gets another six as he helps a pull shot over long leg for a crucial six. However, the ball was pretty poor from the experienced Southee. The equation is comfortably in India's favour. After 17 overs, India are 175/4, needing 29 off 18 balls.

15:30 hrs IST: Iyer cracks a crucial boundary to deep point. He is following the mantra of taking the game deep. Manish Pandey clobbers a short ball over wide long on for a crucial six. After 16 overs, India are 165/4, need 39 off 24 balls.

15:20 hrs IST: WICKET! The pressure told on Dube. He mistimes the hack across the line to deep midwicket but Southee, running to his left from wide long on, takes a superb catch near the boundary. India are 142/4 after 13.2 overs, need 62 off 40 balls.

15:17 hrs IST: Dube blasts a flatter delivery down the ground for a boundary and then thwacks a six just over deep midwicket. After 13 overs, India are 142/3, need 62 off 42 balls.

15:13 hrs IST: Iyer thumps an inside out boundary to long off. He holds the key now but India have batting in the form of Manish Paney and Ravindra Jadeja. After 12 overs, India are 129/3, need 75 off 48 balls.

15:10 hrs IST: WICKET! That is the massive scalp. Guptill, just like in the 2019 ICC Cricket World Cup, has silenced India. Tickner floats a full ball on the pads, Kohli makes room and whippily flicks it to deep midwicket but Guptill tumbles forward and takes a stunning catch. After 11.1 overs, India are 121/3, needing 83 off 53 balls.

15:03 hrs IST: WICKET! The wide plan has worked. Rahul is frustrated and he slogs at a wide legbreak. Gets the top edge and Southee runs in from long off to take the catch. His superb knock ends. After 10 overs, India are 115/2, needing 89 off 60 balls.

14:57 hrs IST: FIFTY! 10th for KL Rahul and he gets there with a six off Tickner. New Zealand are not doing any favours as Ish Sodhi drops Virat Kohli on 33. The game is slipping away from New Zealand. After nine overs, India are 107/1

14:52 hrs IST: Brilliant batting from KL Rahul. He mauls a four down the ground and then flat-bats a slog straight over long off. That was a proper tennis forehand, probably he is seeing the Australian Open a bit too much. After eight overs, India are 91/1.

14:49 hrs IST: Kohli mauls a short ball from Ish Sodhi to the wide long on fence. India are on par with the required rate. After seven overs, India are 77/1.

14:42 hrs IST: Two run-out chances missed in the same ball! Rahul and Kohli are at the same end but the first throw is not great as it goes over the stumps. Rahul is still half-way away when the second throw misses the stumps. Rahul had to make it with the dive but New Zealand will rue this missed chance. After six overs, India are 65/1.

14:38 hrs IST: Rahul whips a six over deep midwicket off Southee. The timing was superb and he ends the over with a top-edged pull that lands safely at fine leg. After five overs, India are 57/1.

14:33 hrs IST: Kohli launches Blair Tickner over long off for a big six. After four overs, India are 41/1. Both Rahul and Kohli are in good form.

14:28 hrs IST: Kohli gets going by thumping Hamish Bennett over long on for a boundary. India have started well. After three overs, India are 31/1.

14:22 hrs IST: WICKET! Superb comeback from Mitchell Santner. After being hit for a four by Rahul and then a six over long on by Rohit, he floats a slower delivery that spins away outside off, Rohit mistimes the lofted shot and holes out to point. India are 21/1 after two overs.

14:18 hrs IST: Good over from Tim Southee as he bowls in the right areas and lengths. India are 4/0 in the first over.

14:04 hrs IST: New Zealand have ended on 203/5 after the end of 20 overs. This is an imposing total. Kane Williamson, Ross Taylor and Colin Munro the stars with fifties. India will have a good fight on their hands.

13:49 hrs IST: WICKET! Superb bowling from Bumrah. That is why he is the best. Full and slow ball outside off, Tim Seifert mistimes the lofted shot and holes out to Shreyas Iyer at long on. New Zealand are 181/5 in the 18th over.

13:43 hrs IST: FIFTY and WICKET! Williamson smashes three fours off Yuzvendra Chahal, one to deep midwicket, one to deep extra cover and one to wide long on. He gets to his 10th fifty but next ball, he departs for 51 as he top-edges a legbreak to Kohli at point. New Zealand are 178/4 after 17 overs.

13:39 hrs IST: Carnage in Shami's over. Williamson heaves a four off the first ball but Taylor tears him apart with two sixes and a four as 22 runs come off Shami's over. New Zealand are 165/3 after 16 overs.

13:33 hrs IST: Ross Taylor gets into the action as he reverse laps Jadeja to third man for a boundary and then clobbers a slog sweep into the second tier at deep midwicket. New Zealand are 143/3 after 15 overs.

13:30 hrs IST: Kane Williamson hits his fourth six as he pulls Dube to deep midwicket but Yuzvendra Chahal has a total misjudgment and the ball goes over his head. Why must he be so in when the boundaries in Eden Park are small? New Zealand are 130/3 after 14 overs.

13:23 hrs IST: WICKET! India are fighting back. Ravindra Jadeja darts a quick ball on Colin de Grandhomme's pads and he flicks it to short fine leg but Shivam Dube takes a good low catch. New Zealand are 117/3 after 12.2 overs.

13:20 hrs IST: WICKET! Kane Williamson hits two back-to-back sixes off Shardul Thakur but the bowler earns some respite as Munro short-arm jabs a short ball and holes out straight to long leg. His great knock of 59 ends but New Zealand are 116/2 in 11.5 overs.

13:12 hrs IST: FIFTY! Superb effort from Colin Munro and he reaches the landmark by edging Yuzvendra Chahal to the third man fence. This is his 10th fifty in Twenty20 Intrnationals in addition to his three centuries. His average against India in this format is over 50. New Zealand are 97/1 after 10.4 overs.

13:10 hrs IST: Colin Munro and Kane Williamson survive some close shouts but the New Zealand skipper shows his class by dancing down the track and hammering Dube over long off for a six. New Zealand are 91/1 after 10 overs.

13:06 hrs IST: Another tight over from Yuzvendra Chahal. New Zealand are 84/1 after nine overs.

13:01 hrs IST: WICKET! Finally, some respite for India. Guptill mistimes the short ball from Shivam Dube to deep backward square leg but Rohit is positioned near the boundary. He takes the catch over his head but it is close to the ropes. He manages to regain his balance and ensures his foot is not in contact with the ropes. New Zealand are 81/1 after eight overs.

12:56 hrs IST: Munro misses a short ball and is nearly bowled as Yuzvendra Chahal bowls a tight over. New Zealand are 73/0 after seven overs.

12:50 hrs IST: India are rotating their bowlers around but they are not able to control the flow of runs. Guptill ends the sixth over in style by lofting Shami straight over long on for a huge six. After the end of the powerplay, New Zealand are 68/0 after six overs.

12:41 hrs IST: Very expensive over from Shardul Thakur. He gets clobbered down the ground for a four and a six and he ends the over poorly as Munro top-edges the pull shot over KL Rahul's head. New Zealand are 44/0 after four overs.

12:37 hrs IST: Mohammed Shami is into the attack and Munro continues his good form by short-arm pulling him over deep midwicket. New Zealand are 26/0 after three overs.

12:32 hrs IST: Expensive start for Shardul Thakur. Guptill smashes yet another four but Colin Munro ends the over in style by hammering a six over long off. New Zealand are 19/0 after two overs.

12:26 hrs IST: Martin Guptill launches Jasprit Bumrah over mid-off for a boundary. New Zealand are 7/0 after the first over.

12:17 hrs IST: The national anthems are done. Time for the action to begin at Eden Park, Auckland. As they say in Darts, Game On!

12:03 hrs IST: New Zealand do not have a good record at Eden Park, having won only six out of 18 T20Is at this venue. Their only loss at home against India came at this venue last year.

11:58 hrs IST: Here are the playing XIs of both sides. Shivam Dube is in and there is Yuzvendra Chahal. So, yet again, no Kuldeep and Chahal in the same side. 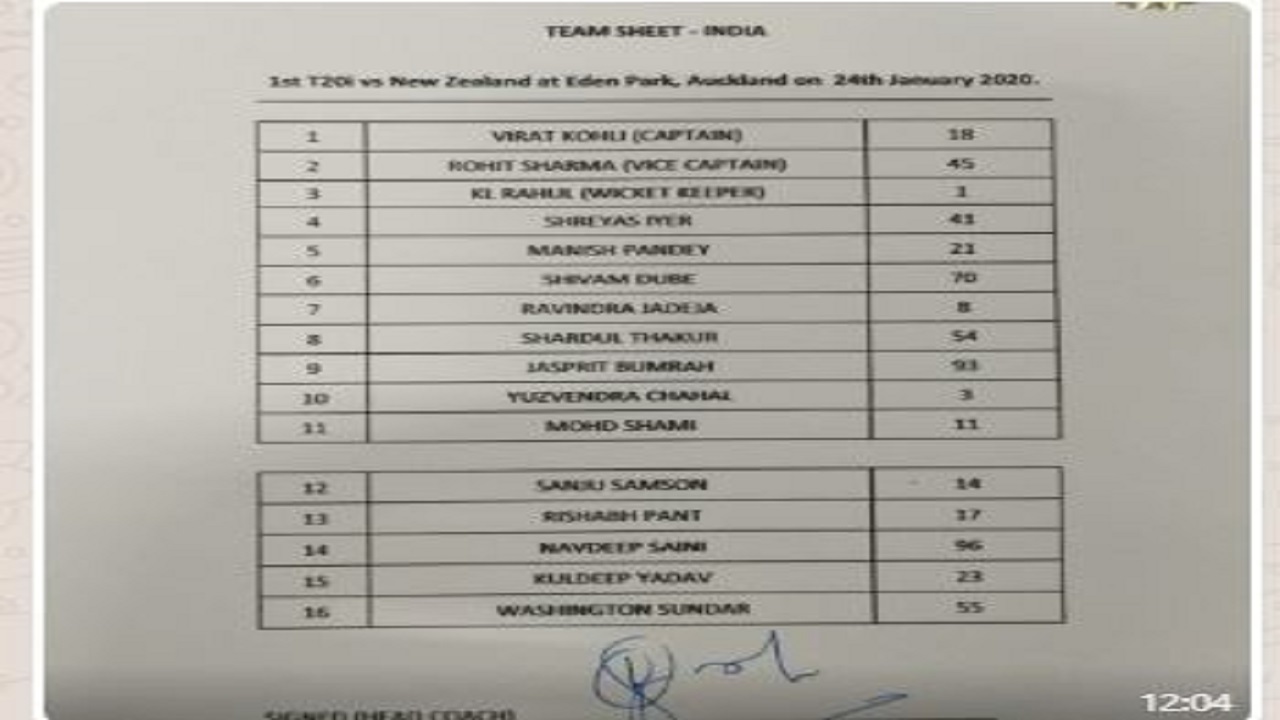 11:54 hrs IST: The Indian fans are coming out in full flow at Eden Park for what has been dubbed as the marquee clash of the New Zealand home summer.

11:52 hrs IST: India have chosen to bowl against New Zealand at Eden Park, Auckland. No Kuldeep Yadav and Navdeep Saini. There are a total of five changes in the Indian team. For Kane Williamson's side, Scott Kuggleijn and Daryl Mitchell miss out.

11:42 hrs IST: Hello and a warm welcome from the land of the Long White Cloud. New Zealand, with its beautiful landscape, stunning weather, flat pitches, short boundaries, rugby grounds turned into cricket, are all set to welcome a dominant India team who will be hellbent on turning around their poor record in New Zealand.