Michael Clarke, The Former Australia Cricket Team Skipper, Has Issued A Joint Statement Along With Kyly That They Have Formally Announced Their Seperation Seven Years After Marriage.

Michael Clarke married Kyly Boldy, who was a former model and a TV presenter back in 2012. (Photo Credit: Getty Images)

Michael Clarke, the former Australia cricket team captain and his wife Kyly Boldy have decided to part ways after seven years of marriage. In a joint statement given by Clarke and Kyly to The Australian, the duo said the decision was taken amicably. "After living apart for some time, we have made the difficult decision to separate as a couple, amicably. With the greatest of respect for each other, we've come to the mutual conclusion that this is the best course for us to take while committed to the co-parenting of our daughter. We'd like to acknowledge the wonderful support we've had from family and friends, and at this time request privacy so that we can manage this next stage of our lives," read the official statement from Michael Clarke and Kyly.

Michael Clarke married Kyly in 2012 and they were blessed with a baby girl Kelsey Lee four years ago when Clarke announced his retirement from international cricket following the end of the 2015 Ashes that saw Australia lose 2-3. Apparently, Clarke and Kyly were reportedly living separately for the last five months but they had not announced their divorce officially. However, they have now decided to split with a mutual conclusion. Clarke and Kyly have also agreed on terms out-of-court to co-parent their daughter.

According to The Australian, their divorce is reportedly worth 40 million Australian dollars (192 crore rupees). The financial settlement was agreed by the couple out of court. While Clarke has moved to his AUD eight million beachfront house in Bondi, Kyly is expected to continue to occupy the couple's home in Vaucluse with daughter Kelsey. 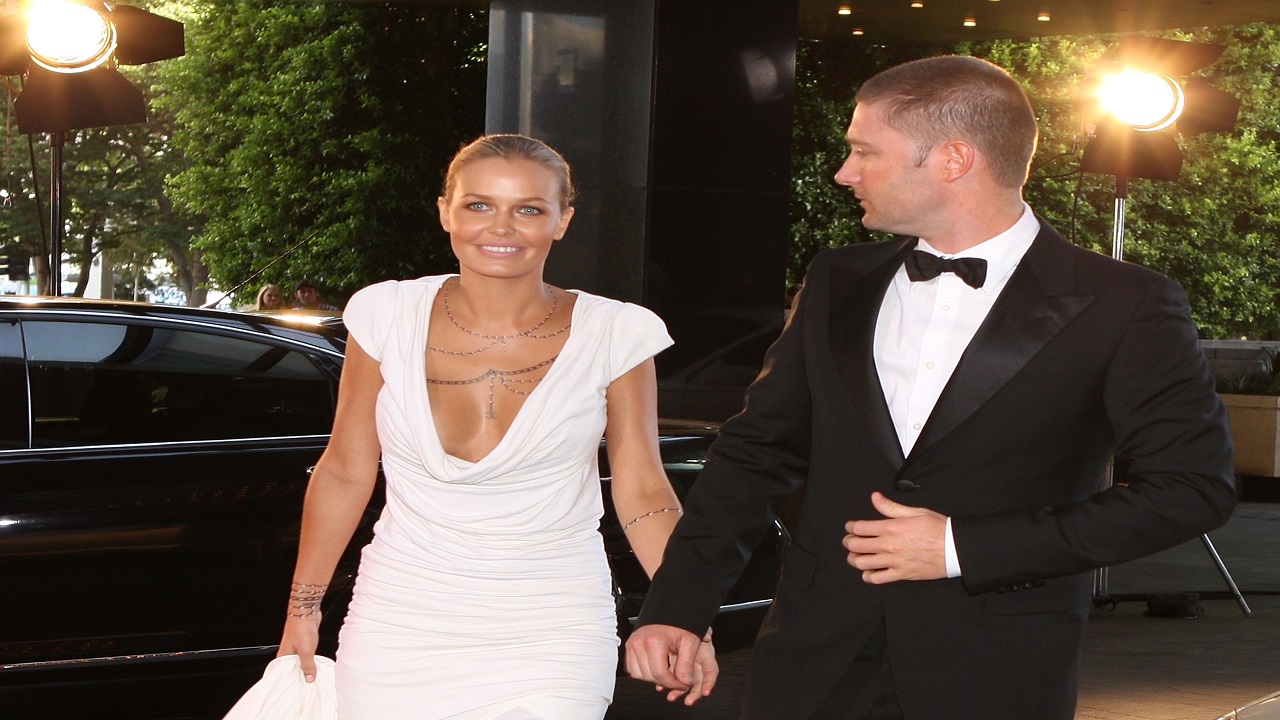 Michael Clarke was in a relationship with Lara Bingle, who is now married to Sam Worthington. (Image credit: Getty Images)

In the last 10 years, Clarke has been plagued with personal and professional problems but he was a vital cog in Australia's success. Clarke led Australia to a memorable fifth ODI World Cup triumph in 2015. He played 115 Tests, 245 ODIs and 34 T20Is amassing over 17,000 international runs. He is regarded as one of the finest batsmen to have played for Australia.

In the beginning, Clarke was in a relationship for eight years with teenage sweetheart Erina-Lea Connelly. However, he broke up with Connelly and started a relationship with Lara Bingle in 2007. In March 2010, Clarke famously left his teammates midway through a New Zealand tour to return to Australia for 'personal reasons.' He announced two days later he had split with Bingle after a naked photo of Bingle in the shower was taken by one-time lover, AFL star Brendan Fevola which was leaked and went viral.

Following Clarke's marriage in 2012 to Kyly, the couple seemed to be going strong. However, cracks started developing after 2016. It wasreported that the celebrity couple parted their ways 5 months ago, with Clarke moving out of their home in Vaucluse before relocating to the pair's Bondi beachfront pad, worth AUD 8 million.

Kyly, a former model and a TV presenter had earlier said to The Daily Mail that there marriage was going strong and a chance of separation with Clarke was non-existent. Apart from personal issues, Clarke also had a strained relationship with several Australian players. He had a fall-out with Simon Katich in 2009 and he also called Shane Watson a 'tumour' in the team. He also had a strained relationship with Ricky Ponting while his final cricketing days was emotionally scarred by the death of his team-mate Phillip Hughes.