Nathan Lyon Took His Third Ten-wicket Haul In Tests As Australia Crushed New Zealand By 279 Runs To Achieve A 3-0 Whitewash In The Series.

When Australia had swept Pakistan aside 2-0, there was hope that New Zealand would provide a stiffer competition. Sadly, that was not the case. After the thrashings of Perth and Melbourne, the trend continued in Sydney. David Warner slammed a century to end the Test summer in grand style but Nathan Lyon, who had not taken a single five-wicket haul at the Sydney Cricket Ground prior to this match, not only took five wickets but ended with his third 10-wicket haul in Tests as Australia thrashed New Zealand by 279 runs on Monday to achieve a 3-0 whitewash. With the match ending on the fourth day, Australia's dominant summer came to an end and it was a summer which saw them winning all the five matches with a day to spare.

New Zealand were already staring at the inevitable after Nathan Lyon had taken his first five-wicket haul at the venue. Armed with a 203-run lead, David Warner ensured that there would be no coming back for New Zealand in the match and he clinically dismantled the opposition. Warner slammed two boundaries off Mat Henry while Joe Burns showed his intention with a big six off William Sommerville. Burns targeted the spinners and he launched his second six with Todd Astle getting deposited over long on.

Warner notched up his 31st fifty with a boundary off Neil Wagner. New Zealand had something to smile for when Astle claimed Burns with a googly but in came Marnus Labuschagne and it looked like he would just carry on batting. Labuschagne benefited from a dropped catch by Astle and he made New Zealand pay. Warner, on the other hand, raced past the eighties while Labuschagne was calmness personified as he found the gaps with ease.

After the lunch break, Warner neared his century with two streaky edges off Henry and he notched up his 24th century with a flick off Henry to set off delirious scenes. Labuschagne's golden summer continued when he flicked Colin de Grandhomme for a boundary for yet another fifty. There was some controversy when umpire Aleem Dar awarded five penalty runs to New Zealand as Warner ran twice onto the danger area of the pitch. Latham missed a stumping off Labuschagne but when he fell for 59, the innings was declared at 217/2 and New Zealand were given a target of 416, with Warner unbeaten on 111.

If New Zealand wanted to take the game into the fifth day, they were mistaken. Tom Latham and Tom Blundell were ripped out by Mitchell Starc while Lyon snapped Jeet Raval and Glenn Phillips, who made a fifty on debut. At the tea break, New Zealand were 27/4 and it looked like another four-day finish was on the cards. 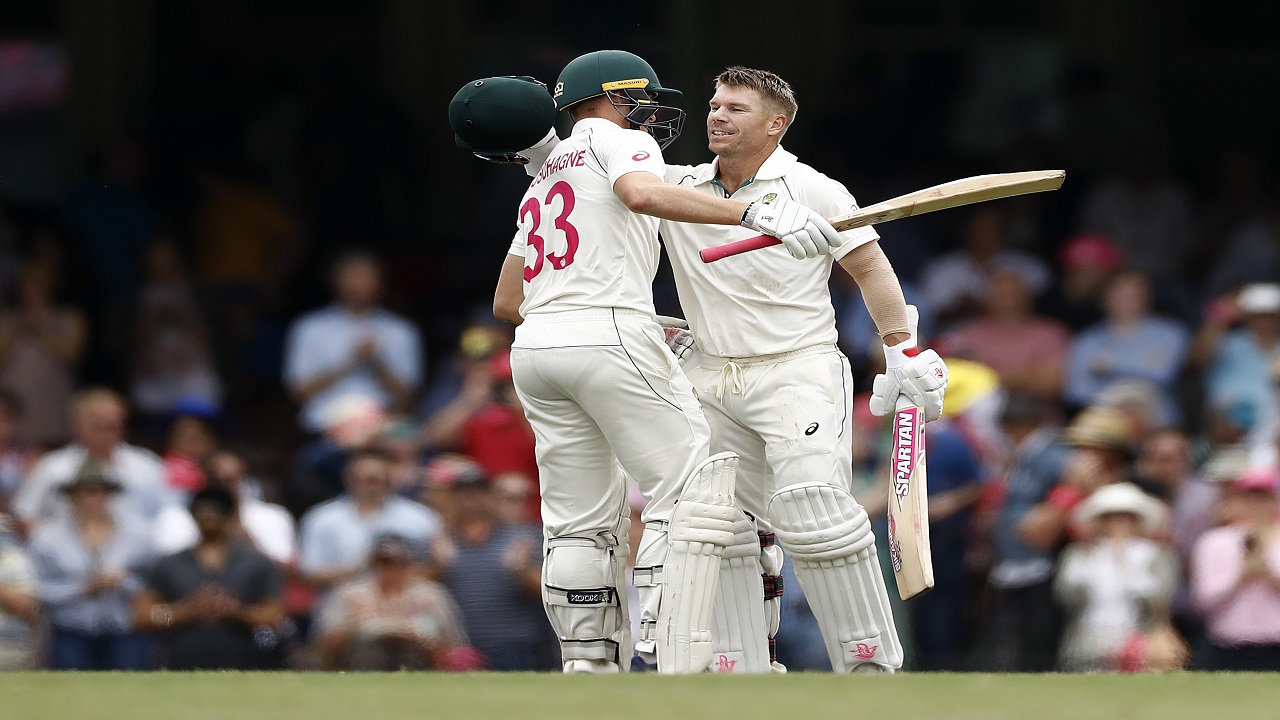 Ross Taylor became the leading run-getter for New Zealand in Tests but that was small consolation as Pat Cummins breached through his defence. BJ Watling and de Grandhomme delayed the inevitable. While Watling focused on stone-walling the innings, de Grandhomme was aggressive and he found the boundaries at will. de Grandhomme targeted Lyon with a couple of boundaries and he neared his fifty by showing aggression against Cummins and Lyon.

The offspinner was generating tremendous spin and rip off the deck as Australia closed in on the kill. De Grandhomme notched up his fifty with a big six off Lyon but the offspinner had his revenge as the batsman miscued a slog sweep to deep midwicket. Todd Astle showed some aggression but it took a stunning catch from James Pattinson to send him back. Astle miscued the slog sweep but Pattinson, running to his right from long on, dived full length to his right and took a stunning catch. Starc detonated Sommerville's middle stump with a pin-point yorker while Lyon got the wicket of Watling. With Henry not coming out to bat due to a broken thumb, the match ended and Australia were the winners.

Labuschagne was declared the Man of the Match as well as the Man of the Series and he said he was having the time of his life. "The way I hit the ball and the way the batting group has performed has been tremendous. It's so special to share these moments with your family."

Kane Williamson, the New Zealand skipper who missed the match due to flu, admitted they were outplayed. "In many departments we were outplayed. The bowling was good but we struggled to put them under pressure for any considerable period of time. With the bat though we just weren't able to stitch up the partnerships. We got exposed by a fantastic bowling attack and it is important that we use this opportunity to learn for the future," Williamson said. New Zealand will now gear up for a Test series at home against Virat Kohli's Indian cricket team while Australia will travel to India for three ODIs beginning on January 14.