Ravindra Jadeja And Navdeep Saini Shared A 76-run Stand For The Eighth Wicket But New Zealand Held Firm And Pulled Off A Tense 22-run Win Against India As They Took An Unassailable 2-0 Lead In The Three-match Series.

Ross Taylor and Kyle Jamieson's 76-run stand for the ninth wicket proved to be match-winning for New Zealand in their game in Auckland. (Photo Credit: Getty Images)

The Auckland ODI witnessed a story of two 76-run partnerships for the final wickets which witnessed contrasting results. New Zealand were staring down the barrel at 197/8 but Ross Taylor and debutant Kyle Jamieson stitched a 76-run stand for the ninth wicket which helped New Zealand reach 273/8. The recovery by Ross Taylor and Jamieson gave the bowlers some belief that they could keep India's power-packed batting down which they did. However, just like New Zealand, they found two heroes in the lower order. Ravindra Jadeja and Navdeep Saini kept the fight going for India with a 76-run stand for the eighth wicket. Saini was the more enterprising of the lot and his shot-making was not a reflection of an individual who was coming to bat for the first time his career. Some of his shots, including a six off Jamieson which sailed into the stands at deep cover made Virat Kohli's jaw drop.

When Saini fell, there was still Ravindra Jadeja. The left-hander notched up his fifty and was threatening a repeat of Auckland 2014 and Old Trafford 2019 against the Kiwis. However, just like in the World Cup, Jadeja fell while trying to take India over the ropes and when he holed out to long off, New Zealand had completed a 22-run win in Eden Park which allowed them to take an unassailable 2-0 lead in the three-match series on Saturday. It was a match where the tail showed more application than the top order. India's top order were blown away by the discipline of New Zealand's bowlers who exploited the conditions brilliantly.

Prithvi Shaw started like a train and it seemed India wanted the match to end in 30 overs. However, New Zealand's bowlers followed the policy of bowling with a scrambled seam and extracting movement off the pitch. Mayank Agarwal poked at a Hamish Bennett delivery which straightened on off stump to Ross Taylor. Prithvi Shaw was undone by a delivery from Jamieson that nipped back in off the deck to fall for 24. What followed was an intriguing spell from Tim Southee.

For all the brickbats that he received in the T20Is and in Hamilton over his death bowling, Southee provided the blueprint of how to set-up a great batsman for the dismissal. After troubling Kohli with some outswingers, Southee bowled the scrambled seam in-cutter that breached Kohli's defences and hit the off stump. This was the sixth time Southee had dismissed Kohli in ODIs and he was now the top bowler to have dismissed Kohli the most number of times. The wicket came despite Kohli knowing that Southee was targeting him for the inswinger. KL Rahul, who has been in the midst of a purple patch ever since December, was undone by Colin de Grandhomme's ability to bowl stump-to-stump

All hopes rested on Shreyas Iyer, who had hit a century in Hamilton as he looked to revive the Indian innings. However, he kept losing wickets at the other end. Kedar Jadhav drove Southee to short extra cover but Iyer was in his elements, crunching de Grandhomme for a big six. The Mumbai right-hander was looking in good touch at the start of his innings and he reached a fifty when he poked Hamish Bennett to the third man fence for a boundary. However, that was the moment when Iyer suffered a terrible brain-fade as he backed away and looked to cut but was cramped by the extra bounce and edged it to Latham. Shardul Thakur, who hit two fours off Neesham, concentration suffered a lapse when he missed a drive to de Grandhomme's in-ducker to be bowled for 13. 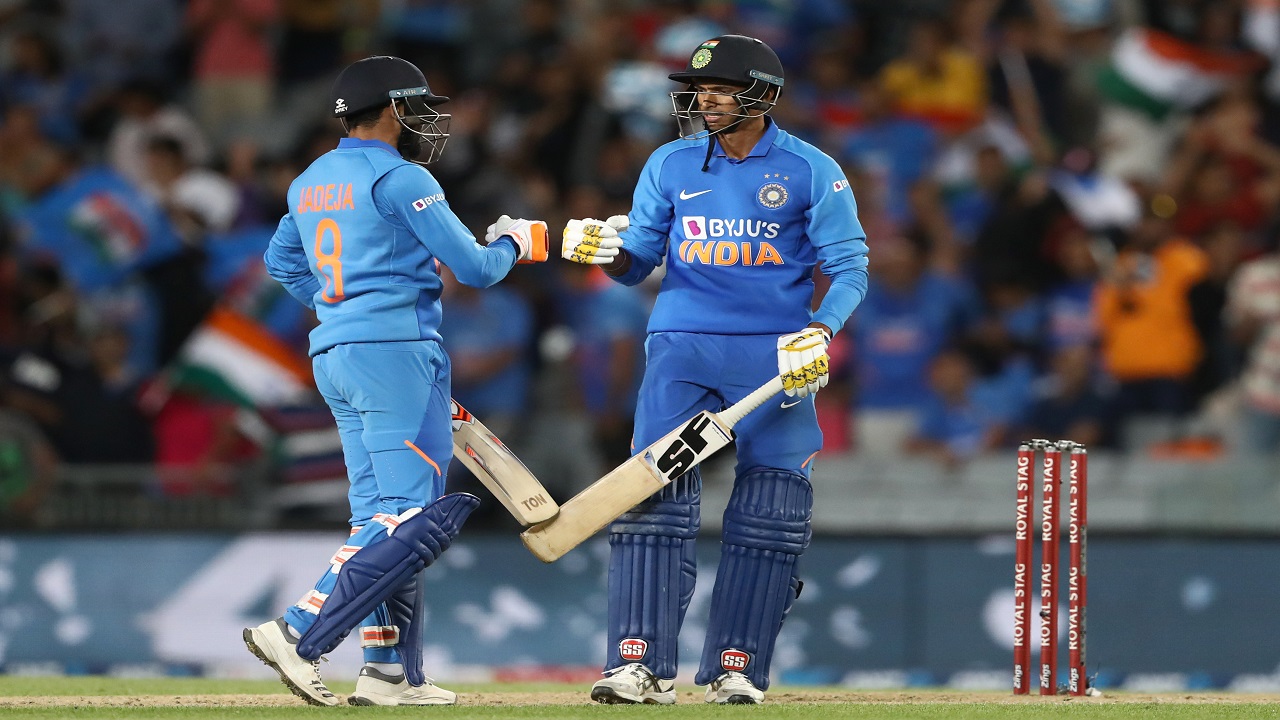 Saini joined Jadeja and the Delhi lad got off the mark in style with a whip to the on side. Both Jadeja and Saini took the game deep and frustrated New Zealand. Jadeja top-edged a short ball to fine leg for a six and Saini clattered Neesham for a six over backward point. With both batsmen aiming to make a move on, New Zealand were in danger of losing control. Saini showed his mettle with three fours off de Grandhomme and his six off Jamieson had the entire crowd at Eden Park shouting for more. However, when he fell in an attempt to slog a pacy length ball, New Zealand had found an opening.

His distraught reaction highlighted that he had missed the chance to guide India home. Jadeja and Yuzvendra Chahal got India closer but Chahal's attempt to run off a misfield resulted in a catastrophic run-out and it was too much to do for Jadeja who was the last victim to fall. In the end, the recovery by Jamieson and Taylor was worth gold.

Martin Guptill and Henry Nicholls started brilliantly, with Guptill taking full toll of Jasprit Bumrah. Guptill got going with two boundaries off Bumrah but in his next over, he glanced two fours and upper-cut a six to the second tier at third man. The start by New Zealand suggested that they were eyeing a total in excess of 300. Nicholls, who batted brilliantly in Hamilton, once again showed discipline but he was trapped LBW by Chahal for 41. Tom Blundell and Guptill shared a good stand, with Guptill notching up his fifty and also becoming the first New Zealand player to hit 4000 runs in ODIs played in New Zealand. 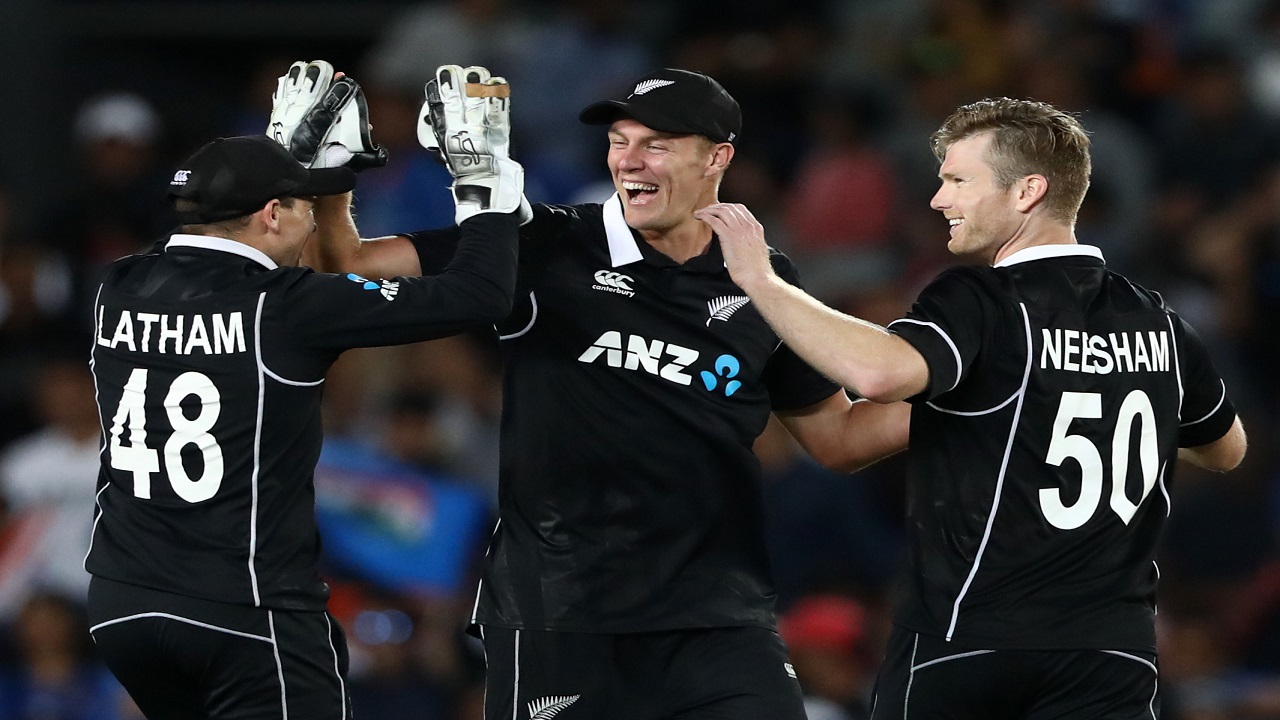 Kyle Jamieson was the Man of the Match for his batting and the wickets of Prithvi Shaw and Navdeep Saini. (Image credit: Getty Images)

The middle overs saw New Zealand collapse disastrously. Guptill and Taylor horribly misjudged a run and Guptill was run-out for 79. From that point on, the middle order crumbled. Tom Latham was LBW to Jadeja for 7 while Neesham's woes with the bat continued as Jadeja effected a brilliant run-out. De Grandhomme's poor run with the bat continued and when Mark Chapman and Southee fell, New Zealand had lost six wickets for 40 runs. However, Jamieson and Taylor had other ideas.

Taylor crunched a six off Saini and in the 47th over, New Zealand had turned the tide. Both Taylor and Jamieson hit sixes and Iyer dropped Taylor's mistimed slog. Jamieson and Taylor hit a four off Bumrah and Saini and in the final over, Taylor reverse paddled Bumrah to third man while Jamieson launched a six over long off. New Zealand had hit 23 runs in the final two overs and this onslaught was just about enough to keep India at bay.