New Zealand's Cricket Team, Be It The Senior National Team Or The Under-19 Cricketers, Demonstrated Yet Again Why They Deserved To Win The ICC Spirit Of The Game Award And It Was On Show During The Tense Quarterfinal Against The West Indies In Under-19 World Cup.

New Zealand were boosted by Kristian Clarke's 4/25 and an unbeaten 46 as they defeated West Indies by two wickets to reach the Under-19 semi-final. (Photo Credit: Getty Images)

New Zealand are considered the most sporting and gentlemanly team that is going around in the cricketing circles. Under Kane Williamson, the side has become a fan favorite not just in New Zealand but for fans all over the world. There is hardly any fan who might want to hate the New Zealand team for their demeanor or for their performance. Virat Kohli, the Indian cricket team skipper, has said one cannot think about taking revenge when it comes to New Zealand because they are the nicest guys going around in the circuit. This is the main reason why New Zealand won the ICC Spirit Of Cricket Award. There is a saying that 'Nice Guys Finish Last'. Not so in the case of New Zealand as one more event has emerged which has confirmed their status as the nicest guys on the planet.

During the high-voltage quarterfinal clash between West Indies and New Zealand in the Under-19 World Cup at Willowmoore Park in Benoni, Kirk McKenzie, the West Indies left-handed opener had smashed 99 but had left the field for cramps. He came back in the 48th over with West Indies staring down the barrel. Kristian Clarke was bowling and tragically, McKenzie dragged a full ball back onto the stumps to be dismissed for 99. McKenzie was struggling to walk as the teams headed to the dressing room. 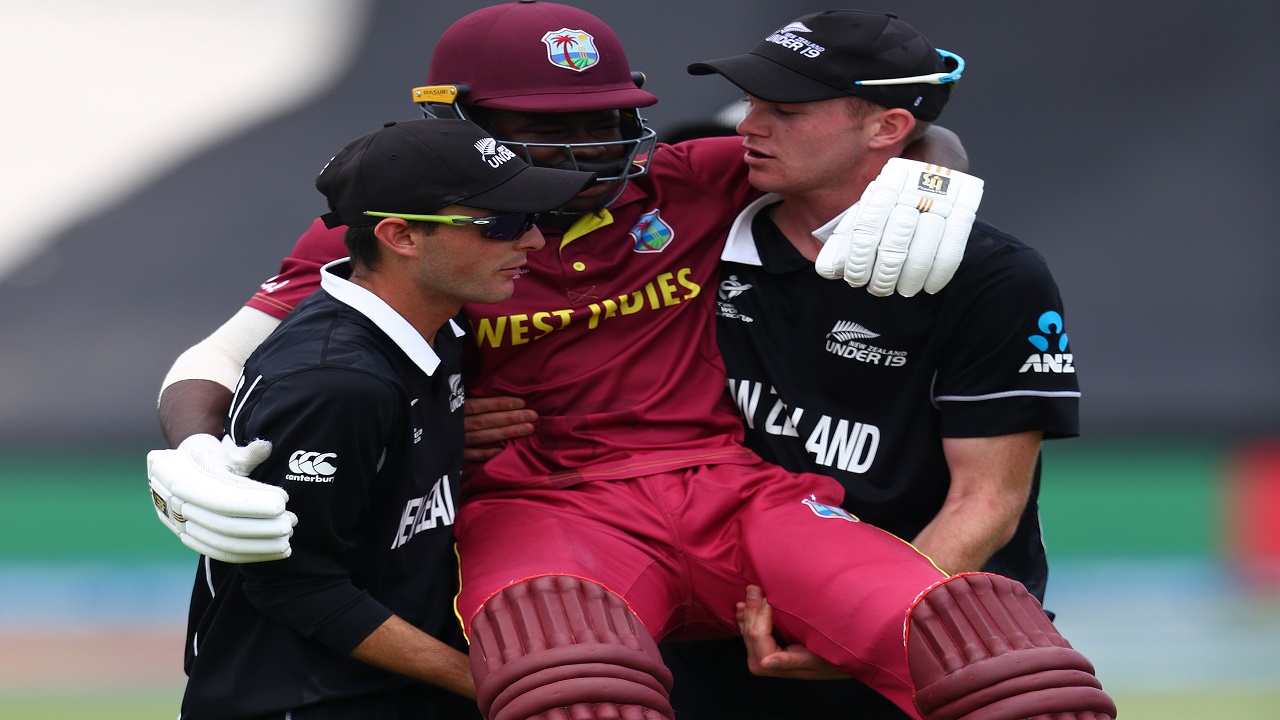 New Zealand once again won the hearts of the cricketing world with this gesture during the Under-19 World Cup. (Image credit: Getty Images)

New Zealand Under-19 skipper Jesse Tashkoff and Joey Field helped McKenzie and carried him over the ropes where they were met with a member of the West Indies medical team. The gesture was applauded by all members from both sides and by the smattering of fans at Willowmoore Park. The incident once again resulted in plenty of praise for New Zealand, with Rohit Sharma, who had starred earlier by beating New Zealand with two sixes in the Super Over sharing the video of the incident and tweeting, "So good to see this #SpiritOfCricket at its best."

West Indies chose to bat and they started poorly with skipper Kimani Melius and wicketkeeper Leonardo Julien falling cheaply. McKenzie and Kelvon Anderson shared a solid partnership as they thwarted the New Zealand attack. Both batsmen looked set and they eyed big scores but Anderson was bowled by Simon Keene. However, McKenzie and Antonio Morris staged yet another stand with McKenzie going past fifty.

So good to see this #SpiritOfCricket at its best. https://t.co/qzUZjEuRt5

In response, New Zealand struggled to build momentum with Matthew Forde and Joshua James taking quick wickets. Nyeem Young and Ashmead Medd also chipped in with wickets and at 153/8 in the 35th over, the game seemed to be up for New Zealand. However, Clarke, who had taken 4/25, decided to hurt West Indies with the bat along with Joey Field.

Both players held their nerve and scored the boundary when the opportunity presented itself. Clarke was in his elements as he launched Forde for a six and Field hit a crucial boundary. Clarke hit two fours off Young and when Forde conceded 10 runs in the 49th over, New Zealand needed seven off the last over. Field hit a four and Clarke, unlike his senior counterparts in Hamilton, stroked the winning runs calmly to help New Zealand reach the semi-final where they will await the winner of the Bangladesh vs South Africa encounter.