New Zealand And Bangladesh Will Be Eyeing Glory In The ICC Under-19 World Cup As They Look To Enter The Final Where They Will Face An Indian Cricket Team That Are In Prime Form.

Bangladesh have reached the semi-final of the Under-19 World Cup for the first time ever. (Photo Credit: Getty Images)

The Indian cricket team put on a comprehensive diplay in the first semi-final of the Under-19 World Cup against Pakistan. Yashasvi Jaiswal's brilliant century and his 176-run opening stand with Divyansh Saxena backed up the earlier efforts by the bowlers, led by Sushant Mishra and Kartik Tyagi as India thrashed Pakistan by 10 wickets to sail into the Under-19 World Cup final for the seventh time. India will be favorites to win the title for a record fifth time and now, they will face the winner of the second semi-final that will take place between New Zealand and Bangladesh also at Senwes Park in Potchefstroom.

The journey of both the New Zealand Under-19 team and the Bangladesh side has been a roller-coaster one, with New Zealand just managing to get over the line on many occasions. Bangladesh, on the other hand, have continued to mirror the rise of their senior team in ICC events as they reached the semi-final. New Zealand's Under-19 World Cup campaign began with a damp squib as their game against Japan was a no-result due to rain. The game against Sri Lanka witnessed a proper thriller as they won by three wickets against Sri Lanka at the Maungaung Oval in Bloemfontein while they lost a 23-overs-per-side shootout against India by 44 runs. New Zealand managed to qualify for the quarterfinals and they first gained plenty of good press by their act of guiding an injured Kirk McKenzie when he was suffering from cramps over the boundary. Kristian Clarke's all-round show broke the Windies hearts and they entered the semis with a two-wicket win.

For Bangladesh, their journey has been consistent. They defeated Zimbabwe by nine wickets in a 22-overs-per-side game at Potchefstroom while they also defeated Scotland by a big margin of 104 runs. They benefited immensely from the washed out game against Pakistan but their coming of age came during the quarterfinal clash against hosts and tournament favorites South Africa. Tanzid Hasan and Shahadat Hossain smashed fifties but Rakibul Hasan's brilliant 5/19 gave Bangladesh a big win and put them in the semi-final of the ICC Under-19 tournament. With Bangladesh having played games in Potchefstroom and with New Zealand playing for the first time, Bangladesh are more aware of the conditions and thus, they go into the game as favorites with the added knowledge that New Zealand do not play spin all that well.

The rain stayed away for the game between India and Pakistan but New Zealand and Bangladesh's clash is not looking so lucky. There are chances of 40 percent thunderstorms and the reserve day will also see rain throughout. The problem is that Potchefstroom will now see rain all the way till Monday and that could also dampen the final.

The pitch at Senwes Park in Potchefstroom has seen some sluggish pace. With the new ball, there is bounce and carry but with the older delivery, it tends to assist spin and run-making becomes slightly difficult.

New Zealand have a fair group of all-rounders who can deliver the goods for the side, in particular Kristian Clarke. The skipper, Jesse Tashkoff, has been in good form both with the bat and as a leader and he will be the key. Bangladesh, on the other hand, have some good batters and good bowlers who have delivered at crucial times in the Under-19 World Cup. Bangladesh and New Zealand might be tempted to field the same unchanged sides for the semifinal 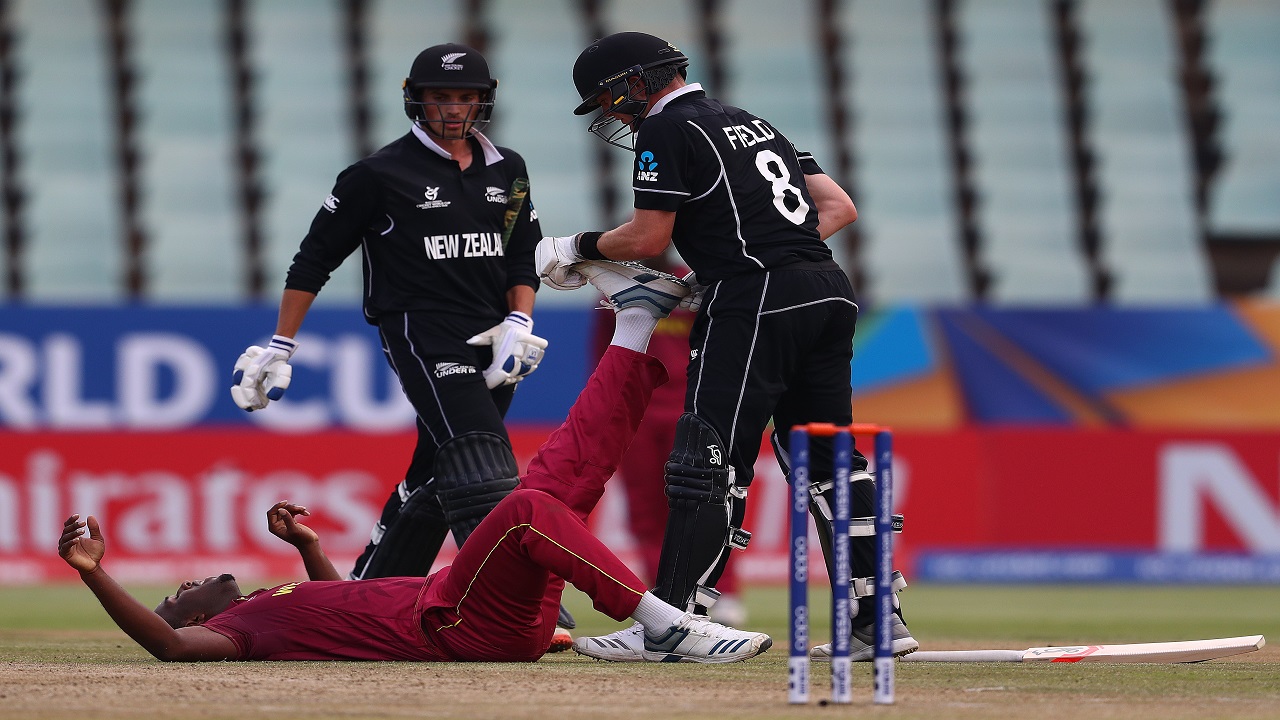 New Zealand survived two thrillers and they reached the semi-final for the first time since 2008. (Image credit: Getty Images)

Looking at how Potchefstroom has not favored teams overly either while batting first or bowling first, it will be a very interesting connundrum as to how the teams approach the match and what they do when they win the toss. Ideally, in the pressure of a big game final, a team might want to bat and put the scoreboard pressure on the opposition.

Past Record At Potchefstroom

There have been 25 matches played at Senwes Park in the Under-19 World Cup 2020. Teams that have chased have won 15 times at this venue in this World Cup while nine teams have managed to defend the total. When one looks at teams and their head-to-hed record, both Bangladesh and New Zealand have a 2-2 record in four Under-19 encounters.

With Bangladesh's arsenal of spinners and with the wickets slowing down with each and every game, Bangladesh hold the edge due to the spinners. However, New Zealand always punch above their weight in World Cups and this match will be no exception.