New Zealand Secured A Five-wicket Win In The Third And Final ODI At The Bay Oval Thanks To Fifties From Martin Guptill, Henry Nicholls And Colin De Grandhomme As India Were Whitewashed For The First Time After 31 Years.

KL Rahul's fourth century helped India to 296/7 but the total felt somewhat underpar considering how well Hamish Bennett and the New Zealand pacers bowled in the death overs. Martin Guptill tore into Jasprit Bumrah and the Indian bowling as he and Henry Nicholls scored at close to seven runs an over. The blitz by Guptill was bookended by a magnificent 21-ball fifty by Colin de Grandhomme, who finally came good with the bat in the series as New Zealand stormed to a five-wicket win in the third and final ODI at the Bay Oval in Mount Maunganui on Tuesday to achieve a 3-0 whitewash. For Virat Kohli's Indian cricket team, this loss resulted in a 31-year low as they were whitewashed in a series of three matches or more for the first time since 1989 against West Indies under Dilip Vengsarkar's captaincy.

It was a study of how New Zealand surprisingly outbowled India in the series, considering that they did not have the services of match-winners like Trent Boult, Lockie Ferguson and Matt Henry before the start of the series. Bennett's exploits in the death, where he took pace of the ball and bowled the wide yorker at will, made a big difference as KL Rahul could not score freely after going past 100. The fact that New Zealand did not give a single wicket to Jasprit Bumrah was perhaps the underlying reason behind their dominance in the ODIs. The fact that they went after Bumrah immediately in the chase was an indication that they were gunning for the whitewash.

Guptill started by hammering a four and a six off Navdeep Saini while in the sixth over, he once again took full toll of Saini with a four and a six. The fact that Saini was given the new ball, in place of Shardul Thakur, who could swing the ball probably suggested that Kohli missed a trick but it would not have made the difference considering the mood Guptill was in. Guptill powered a six and a four off Bumrah while Henry Nicholls gave him good company. The right-hander notched up his fifty off 29 balls and then thumped Shardul for a boundary as India were leaking at close to seven runs an over. 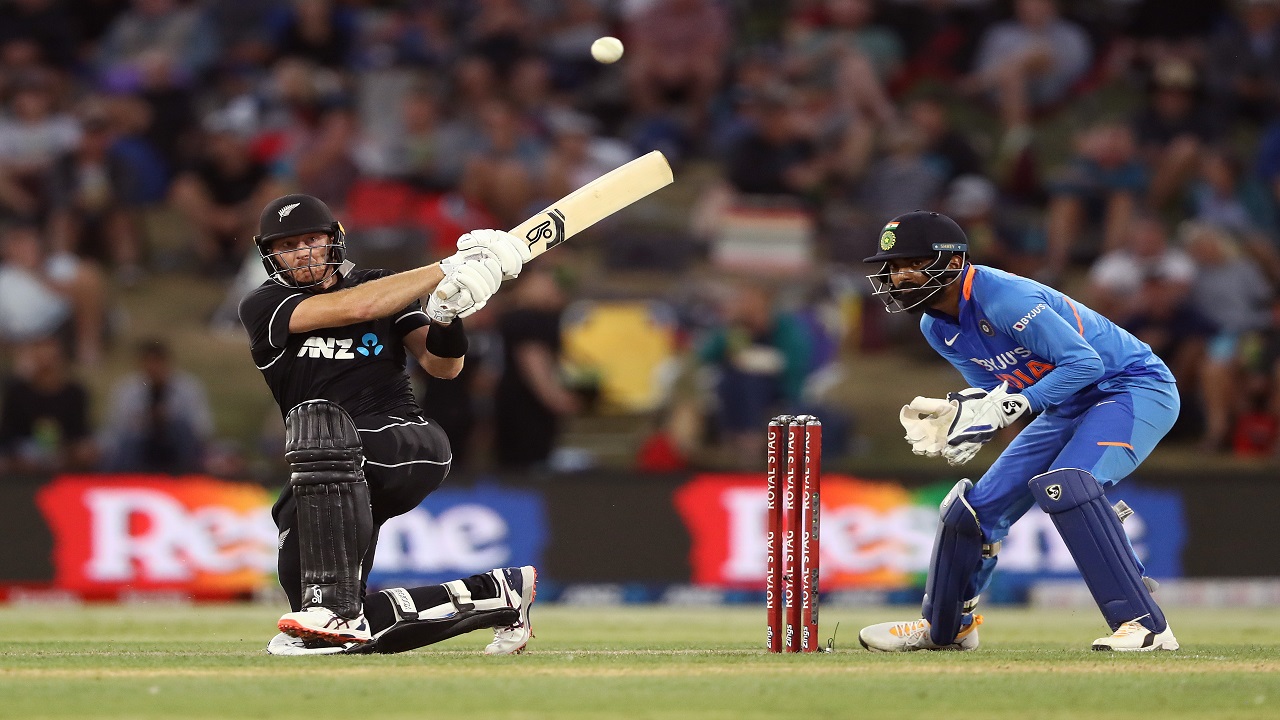 Nicholls and Guptill notched up the 100-run opening stand but Yuzvendra Chahal bowled the ball of the series as he cleaned up Guptill with a sharp, dipping legbreak which breached through Guptill's defences for 66. Kane Williamson made steady prgress but Nicholls notched up his second fifty of the series by flicking Bumrah to the deep midwicket fence. Saini struggled with the no-balls as New Zealand coasted past 150 but Chahal kept India in the game when Williamson's onside swipe resulted in Mayank Agarwal taking a catch at midwicket. Nicholls neared his century with two fours off Saini but Ross Taylor fell for the first time in the series as he was caught by Kohli off Jadeja.

When Nicholls flashed at a wide delivery from Thakur to be caught by the keeper for 80, India had a whiff of a chance. Neesham hit a six off Thakur and followed it up with a couple of boundaries but he fell to Chahal to give the legspinner his third wicket. With 69 needed off 54 balls, the game was evenly poised but de Grandhomme, under pressure for his failings with the bat, broke the shackles with a six off Chahal. After Latham hit a boundary, de Grandhomme followed it up with a six and a four as 15 runs came in Thakur's over. Latham and de Grandhomme negotiated Bumrah but the contest was killed in the 46th over when de Grandhomme hit three fours and a six to notch up his fifty off just 21 balls. Fittingly, de Grandhomme hit the winning runs off Thakur as New Zealand achieved a whitewash.

New Zealand chose to bowl and they had immediate success with Kyle Jamieson sending back Mayank Agarwal cheaply. Prithvi Shaw looked in good touch and Kohli got going with a flat six off Tim Southee. However, the New Zealand players got a shot in the arm when Bennett sent back Kohli with Jamieson taking a good catch at deep midwicket. Shaw, though, was undaunted and he blasted two sixes and a four off Bennett while Shreyas Iyer got off the mark with a boundary. Shaw looked good for a fifty but he threw away his wicket in the pursuit of a needless second run as he was runout for 40.

Iyer and KL Rahul, though, steadied the innings. Iyer and Rahul maintained a decent rate of scoring and they rotated the strike consistently. Iyer notched up his fifty with two fours off Jamieson while Rahul neared his fifty. New Zealand, though, broke the 100-run stand when Iyer got a leading edge to the offside and de Grandhomme took a good catch to give Neesham his wicket. Manish Pandey looked in confident touch but Rahul notched up his fifty.

New Zealand missed a run-out chance off Manish Pandey while Rahul also benefited from a dropped catch by Latham off Santner. Rahul entered the 90s with a six but New Zealand were pulling things back in the death overs. He notched up his fourth century and he launched Bennett for a big six. In the 47th over, Bennett gave New Zealand the double-breakthrough when he sent back Rahul and Pandey in quick succession.

Southee have away 23 runs in his two overs in the death but Bennett's spell ensured India did not cross 300. At the end, the assault towards the end showed that even a total in excess of 300 would not have been enough as they stormed to the whitewash in grand style and extracted revenge for the 5-0 sweep in the T20Is.