New Zealand's Bowlers Ran Through The Tail And Fifties From Tom Latham And Tom Blundell Took The Hosts To A Magnificent Seven-wicket Win Against India As They Swept The Series 2-0.

The India tour of New Zealand in 2020 will be remembered as the tour of whitewashes. After India started the proceedings with a magnificent 5-0 whitewash of the Kiwis in the Twenty20 Internationals, New Zealand bounced back by clean-sweeping India 3-0 as Virat Kohli's side were humbled after 31 years. Kane Williamson's side also added the Test series in their kitty as Trent Boult's 4/28, combined with fifties from Tom Blundell and Tom Latham helped New Zealand win at the Hagley Oval in Christchurch by seven wickets on Monday against Virat Kohli's Indian cricket team and sweep the series 2-0. When day 3 began, the hope was on the Indian lower order emulating the New Zealand tail as they looked to register a target in excess of 200 and make a match out of it. Instead, under overcast skies and with New Zealand's bowlers showing more discipline, India managed just 34 runs as the batting collapsed and they were bundled out for 124, setting New Zealand a target of 132.

Hanuma Vihari was strangled down the leg side with a full ball from Tim Southee and BJ Watling took the catch. Boult set Pant up brilliantly by beating him first ball with an outswinger and then bowled a straight ball to once again breach his defences. The third ball was again an outswinger and Pant edged the delivery to be caught by Watling. Tim Southee got his third wicket when Mohammed Shami holed out to deep midwicket but Jadeja looked to get going by hammering a six to long on.

Jasprit Bumrah glanced a boundary to fine leg and Jadeja signalled his intentions with another lofted shot to long on for a boundary. Jadeja tapped a ball to the leg side and Bumrah looked for the single but was sent back half-way. Boult ran and fired the throw at the bowler's end but he missed it but Kane Williamson's presence of mind ensured that he ran in and broke the stumps to end India's innings on 124.

Armed with the new ball, Shami, Bumrah and Umesh Yadav looked to make early inroads but Umesh, as he had done in the past, failed to bowl consistently to maintain pressure. While Bumrah built up pressure with disciplined seam bowling at pace, Umesh leaked boundaries to both Tom Blundell and Tom Latham. In the ninth over of the innings, Blundell got an inside edge off Bumrah but Pant failed to latch onto the catch. The umpire did not spot the edge and he signalled a bye. Shami was introduced into the attack and he immediately pinged Latham on the helmet. 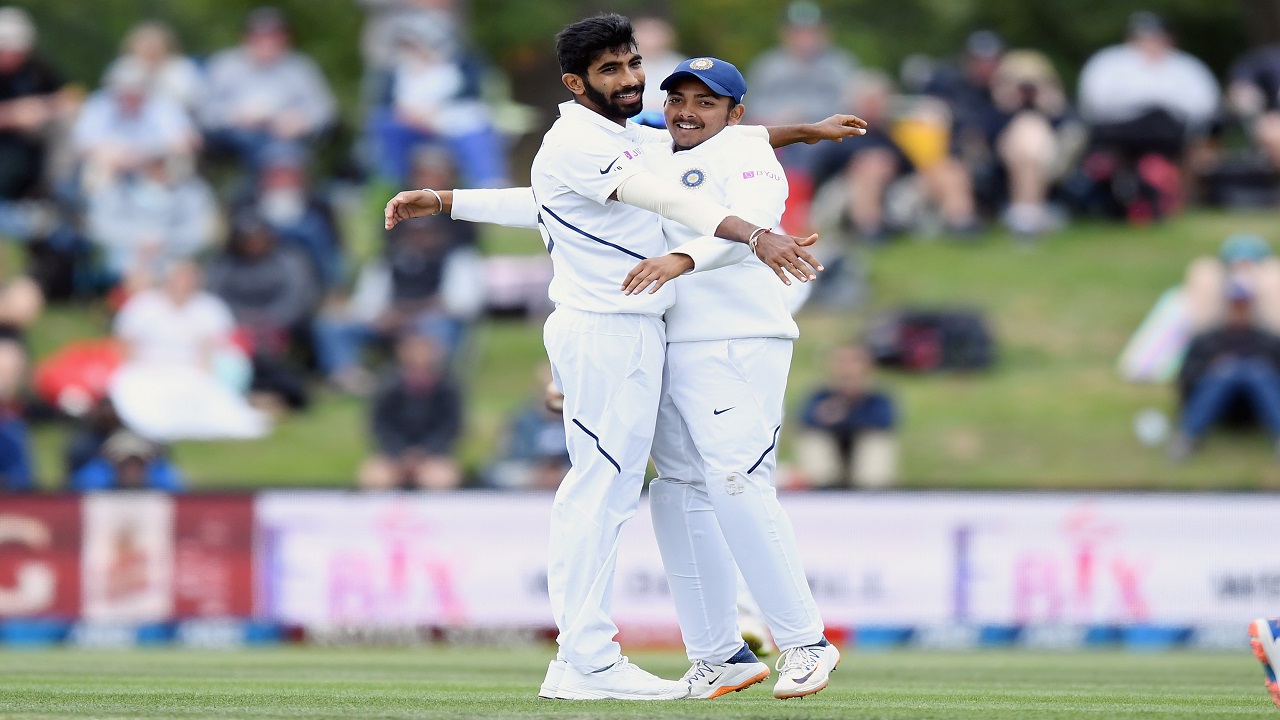 Jasprit Bumrah took two wickets but it was all in vain for India as they were whitewashed in the Tests. (Image credit: Getty Images)

Blundell responded with two counter-attacking boundaries off Shami as the openers survived the session without any further jolts. After the session, the New Zealand openers scored consistently and they were also helped by the low morale of the Indian team. Latham hit two boundaries off Umesh while Blundell showed his class with a six off Ravindra Jadeja. Latham hit his fifty but he was dismissed for a pair of 52s when Umesh got a short ball to climb up and Latham gloved the pull to the leg side but Pant took a great catch with one hand.

Bumrah showed his magic when he dismissed Williamson with a brute of a bouncer that leapt up and the Kiwi skipper could only glove a catch to gully. Blundell hit his fifty by driving Umesh to the deep point boundary but Bumrah had the last laugh when he uprooted his off stump with a delivery that cut back in sharply at pace. Henry Nicholls and Ross Taylor ensured New Zealand got to the line and when Nicholls pushed Jadeja to long on, the win was sealed in two and a half days. The win against India would eliminate many low points for New Zealand in the last one year and it has made the ICC World Test Championship slightly more open now.