Prithvi Shaw Notched Up A Fifty And Took The Attack To The New Zealand Bowlers On A Green Track But He Fell Just Before Lunch To Hand The Hosts The Initiative On The First Day Of The Second Test At The Hagley Oval In Christchurch.

Prithvi Shaw slammed his first fifty overseas as India made a strong start on a green deck at the Hagley Oval in Christchurch vs New Zealand. (Photo Credit: Getty Images)

Prithvi Shaw blasted his second fifty on a green track at the Hagley Oval in Christchurch but his dismissal just before lunch thanks to a brilliant catch by Tom Latham handed the initiative back to the hosts as India reached 85/2 at lunch on day 1 of the second Test on Saturday. Prithvi Shaw, who was under an injury cloud due to a swollen left foot, was declared fit and he proceeded to take the attack to the New Zealand bowlers by batting with supreme confidence to put India in a better position as compared to the first day in Wellington.

Rain delayed the toss for close to 45 minutes and when the covers came off, the pitch did not look any different from the outfield. The pitch had a decent amount of grass covering and the moisture as well as the spongy nature of the wicket meant the team that wins the toss would opt to bowl. Kane Williamson won the toss and he inserted India in. New Zealand welcomed back Neil Wagner, who skipped the Wellington Test for the birth of his child and he replaced Ajaz Patel. India made two changes, with Prithvi Shaw being declared fit. Ishant Sharma, who had complained of an ankle injury during the practice session on Friday, was left out and Umesh Yadav came in his place. Ravichandran Ashwin, who had a poor run in Wellington, was replaced by Ravindra Jadeja.

It was the Mumbai right-hander who started aggressively when he thumped two boundaries off both Trent Boult and Tim Southee. With the cloud cover gone and with the sun shining, the pacers got some movement off the deck and not much in the air but Shaw decided that aggression was the best option. Southee was carted for two fours by Shaw, one a punched drive to deep extra cover and the other a straight drive to long on. Agarwal also showed intent with a boundary off Boult but the bowler had the last laugh when he got a full ball to curve back in to trap Agarwal in front for 7, with the review also not helping him. 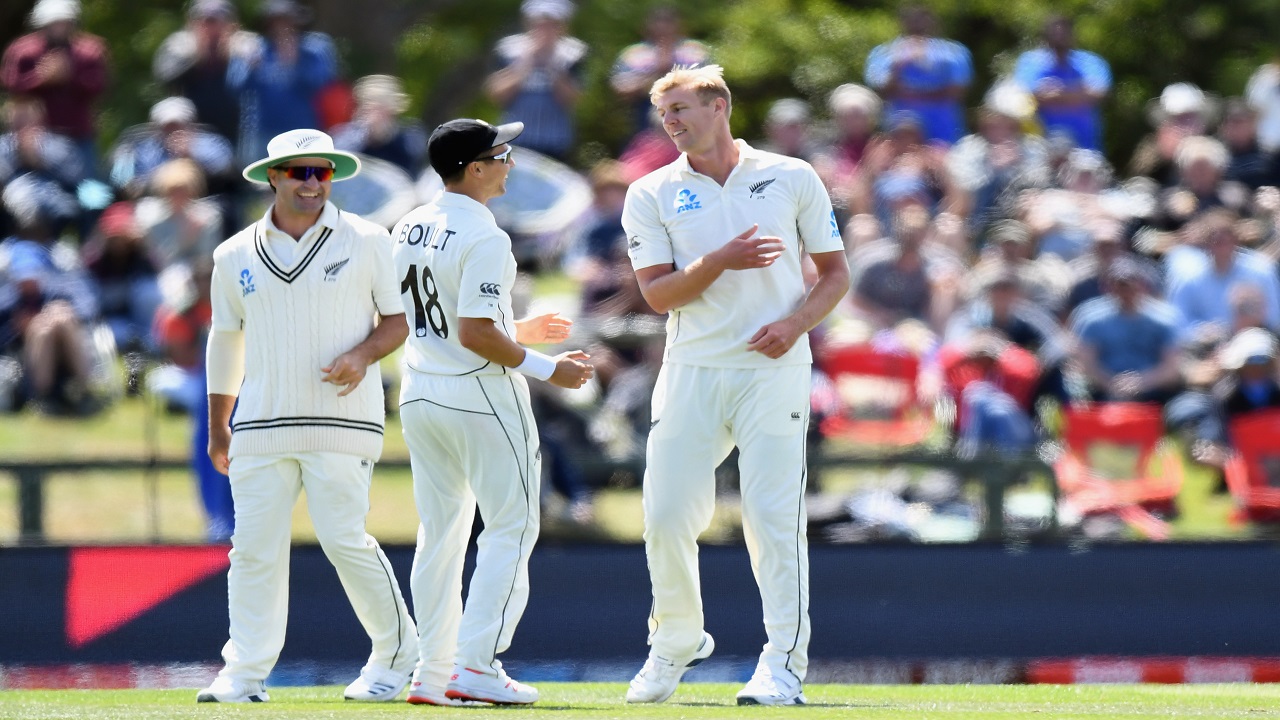 Shaw, though, continued on his merry ways and he took a liking to Colin de Grandhomme by hitting him for two fours in one over. Cheteshwar Pujara, who was bogged down in Wellington, got going early with a boundary off Boult to long off. New Zealand wasted a review on Pujara as the batsman offered no shot and the ball was going over the stumps. Shaw reached his second fifty in style by hammering a short ball from Neil Wagner over the fence for a six but Kyle Jamieson, who had impressed in Wellington struck a big blow.

Jamieson floated a full ball outside off and Shaw went for the drive, the edge flew over second slip where Tom Latham leapt and plucked a stunning one-handed catch. Skipper Virat Kohli got off the mark immediately by clipping Jamieson to the deep midwicket fence for three and Pujara ensured India would end the session without any jolts.