Puducherry Were Boosted By A Double Century From Fabid Ahmed As Manipur Lost All 20 Days On One Day To Lose Their Ranji Trophy Plate Division Clash By A Massive Innings And 241 Runs.

Puducherry won the game against Manipur in two days as they went on top of the Plate Division in the 2019 Ranji Trophy. (Photo Credit: Twitter)

The Ranji Trophy 2020 Plate Division clash between Manipur and Puducherry at the Videocon Academy Ground in Saltair, Kolkata witnessed a lop-sided contest. The Ranji Trophy match got over in two days and Manipur were at the receiving end of a hammering. On day 1, they held the advantage at 194/6 but Fabid Ahmed, batting at No.6, proceeded to change the course of the match comprehensively. Ahmed blasted 233 off 268 balls and he smashed 33 fours and three sixes. He shared partnerships of 65 for the seventh wicket with Sagar Trivdei and a brilliant 192-run stand with Sagar Udeshi that helped Puducherry reach 490. In response, Manipur put on a horror show. In the first innings, Udeshi, who had 57 with the bat, notched up 5/42 as Manipur were bowled out for 138. Rex Singh was the leading run-getter with 33 while Kshetrimayum Narisingh hit 28 and M Shamir Khan hit 25.

In the second innings, Manipur lasted just 35.4 overs Alagh Pratibhan took 5/64 to bowl Manipur out for 111 and give Puducherry victory by an innings and 241-run win. With this victory, Puducherry moved to the top of the Plate Division with 41 points from eight games while Goa are second. Only one team from the Plate Division will make it to the quarterfinal of the Ranji Trophy.

In the game between Haryana and Assam in Rohtak, Haryana were boosted by a superb show from Harshal Patel. The bowler took 4/32 while Tinu Kundu took 5/35 as Assam were bowled out for 97. Rohit Pramod Sharma hit 59 and Chaitanya Bishnoi hit 46 as Haryana managed to take a 101-run lead. Saahil Jain hit 63 and skipper Gokul Sharma hit 44 but Harshal took four wickets again as Assam were bowled out for 198. Sidharth Sharma took two wickets but Haryana held firm to win by seven wickets. 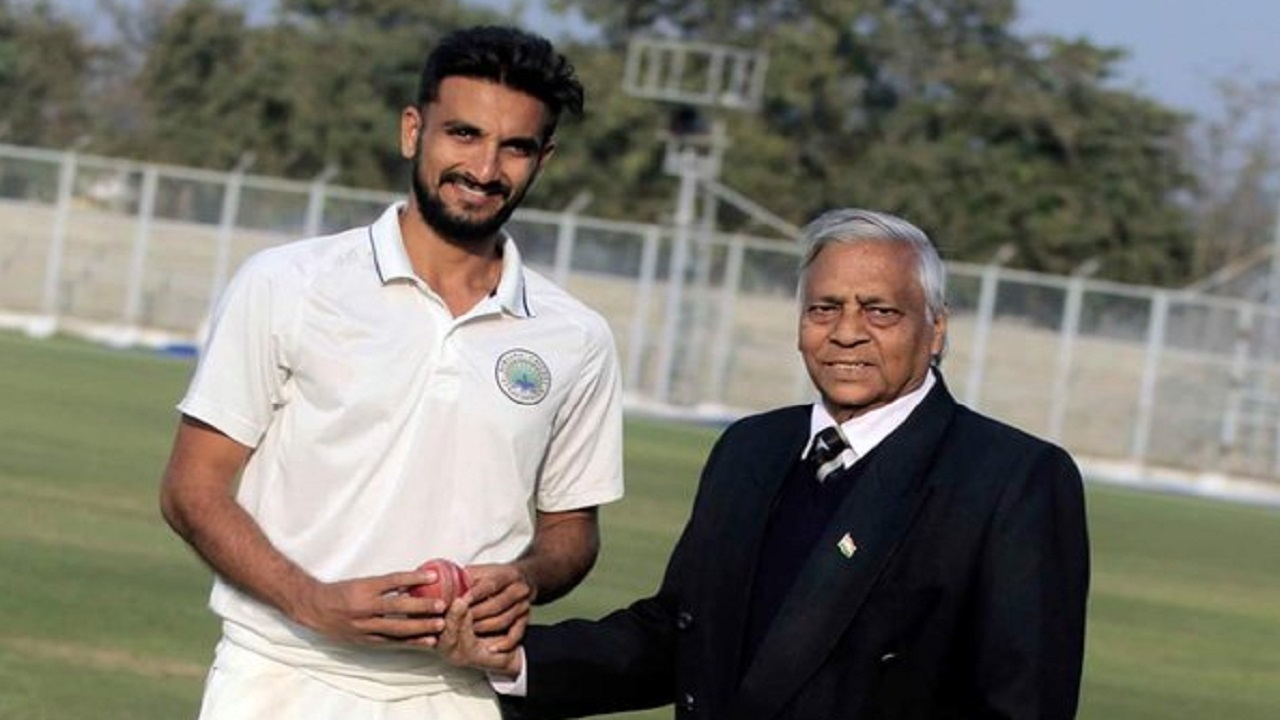 Harshal Patel has taken 51 wickets in the Ranji Trophy season which is the most by a Haryana bowler ever. (Image credit: Twitter)

Punjab continued their great run with a tense win against Andhra in Patiala. Siddarth Kaul ran through the Andhra batting with 5/24 as Andhra were bundled out for 97. Punjab fared no-better with the bat but Anmol Malhotra helped Punjab take a 11-run lead as Shoaib Mohammad Khan and S Ashish took five wickets apiece. Ricky Bhui, the skipper, then slammed 61 while KV Sasikanth hit 47 but Vinay Choudhary's 6/46 and Mayank Markande took 4/46 as Andhra were bowled out for 134, setting Punjab a target of 124. Punjab, in turn, were reduced to 32/5 but Malhotra's 51 and Abhishek Gupta's 37 shared a 79-run stand helped Punjab get over the line.

In other games, Services registered a 10-wicket win against Uttarakhand in Dehradun while Meghalaya won by 66 runs against Sikkim. In the game between Chandigarh and Mizoram, Gurinder Singh took 4/18 as Mizoram were bowled out for 109 despite Taruwar Kohli's 77. In response, Raman Bishnoi blasted 139 but Uday Kaul, the wicketkeeper, blasted 212 and Ankit Kaushik hit 177 as they shared a 279-run stand to help Chandigarh declare on 587/5. Gurinder Singh and Arpit Pannu took three wickets apiece and Mizoram were bowled out for 122 as they lost by an innings and 356 runs.