Ranji Trophy 2020: Eight Teams For Knock-Outs Decided After Last Round Of League Games

The Eight Teams That Have Qualified For The Quarterfinal Of The Ranji Trophy 2020 Are Goa, Jammu And Kashmir, Odisha, Gujarat, Bengal, Karnataka, Saurashtra And Andhra After The League Matches Came To An End.

Odisha's game against Jharkhand ended in a draw and they will take on Bengal in the Ranji Trophy quarterfinal. (Photo Credit: Twitter)

After a solid month of action-packed league games in the 2020 Ranji Trophy, the eight teams that have made the quarterfinals of the tournament have been finally decided after the last round of games concluded. The structure of qualification from the three groups of the Ranji Trophy are five teams will qualify from Elite Group A and B while two teams will make the cut from Group C. One team from the Plate Division will join the remaining teams. Thus, after the end of the Ranji Trophy league games, the teams that make the cut are Gujarat, Bengal, Karnataka, Saurashtra and Andhra from Elite Group A and B while Jammu and Kashmir and Odisha make it from Group C. The lone team coming out of the plate division will be Goa.

Goa were the first team to seal their spot in the quarterfinals as their match against Mizoram ended in two days in Kolkata. Goa were boosted by a brilliant 236 from Smit Patel and 148 from captain Amit Verma. In response, Taruwar Kohli smashed 50 for Mizoram as Lakshay Garg and Amulya Pandrekar took three wickets apiece to bowl them out for 109. Following on, KB Pawan smashed 111 but skipper Verma hurt Mizoram with the ball as he tok 5/39 to give Goa an innings and 211-run victory.

The last league games of Group C witnessed a tense fight between Jammu and Kashmir, Odisha, Haryana and Services. The Jammu and Kashmir vs Haryana clash in Jammu threw the whole group wide open. Jammu and Kashmir were boosted by fifties from Shubham Khajuria and Shubham Pundhir while Rahul Tewatia took 7/98. Pramod Chandila smashed a century and Ankit Kumar hit a fifty but Mujtaba Yousuf took 6/49 as Haryana were bowled out for 291. Jayant yadav took 7/58 as Jammu and Kashmir fell apart for 174, giving Haryana a target of 224. Parvez Rasool took 5/72 but Haryana got over the line in a tense chase by two wickets thanks to 75 from Rohit Parmod Sharma and Rahul Tewatia.

For Haryana, they needed two results go their way. They needed Odisha to lose to Jharkhand and that Services did not register an outright win. They had mixed results. Services bowled Chhattisgarh out for 179 wghile Gahlaut Rahul Singh smashed a century and gave Services a 219-run lead. Services were armed with a lead but Anuj Tiwary's 100, combined by Jiwanjot Singh's 236 and captain Harpreet Singh's 191 helped Chhattisgarh end on 586/3 and the match ended in a draw. 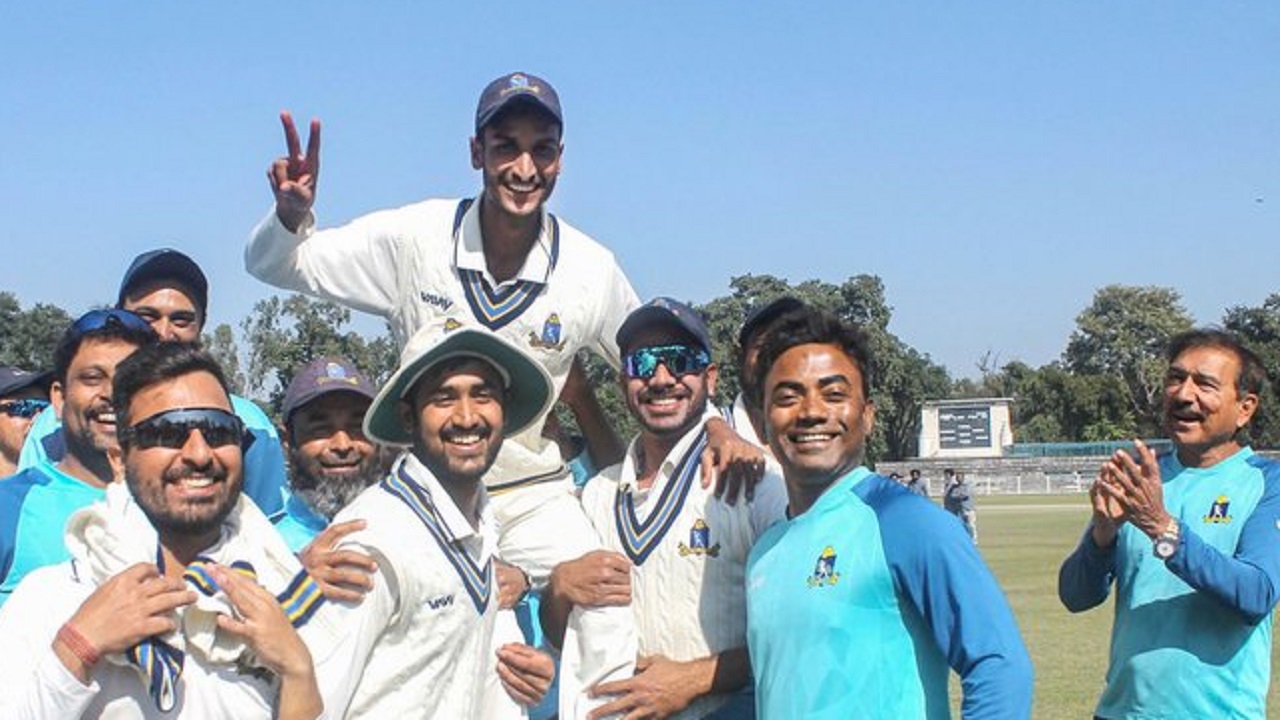 Bengal upset the entire table as they defeated Punjab and stormed into the Ranji Trophy quarterfinal. (Image credit: Twitter)

In Cuttack, Debashish Samantray and Biplab Samantray smashed 156 and 74 respectively to help Odisha reach 436. Kumar Suraj and Virat Singh hit 107 and 83 respectively but Basant Mohanty and Suryakant Pradhan took three wickets apiece and Odisha registered a crucial 80-run lead. Subhranshu Senapati, the skipper, hit 100 and Samantray hit 64 as Odisha held on for a draw to ensure Haryana were knocked out.

Karnataka, who had won the Syed Mushtaq Ali and Vijay Hazare Trophy, stayed on course for an unprecedented quadruple in the Indian domestic circuit as they stormed into the quarterfinal with a tense win over Baroda. Saurashtra had already qualified for the knockouts and a draw with Tamil Nadu confirmed their spot. Andhra's road to the quarterfinal became bumpy but they held on after their eight-wicket loss to Gujarat in Nadiad. Arzan Nagwaswalla's four wickets and Azar Patel's three wickets played a huge part in bowling Andhra out for 177. Chirag Gandhi hit 93 and Axar chipped in with 89 as Gujarat took a 229-run lead. Axar then ran through the Andhra batting in the second innings with 7/92 and Gujarat chased the target down with the loss of two wickets.

Both teams though managed to qualify for the knockouts. However, the result of the Bengal vs Punjab game turned the entire group around. Bengal were bowled out for 138 thanks to Vinay Choudhary's 6/54 and Punjab managed a lead of 13 with Shahbaz Ahmed taking 7/57. Manoj Tiwary hit 65 and Arnab Nandi also hit 51 as Bengal reached 202 despite Krishan Alang's 6/53. Shahbaz took four wickets and despite Ramandeep Singh's 69, Bengal won the match by 48 runs to enter the quarters.

The quarterfinals will be played from February 20 to February 24 with Saurashtra taking on Andhra in Ongole. The second semi-final will feature Jammu and Kashmir taking on the dominant Karnataka team while Bengal will take on Odisha at Cuttack. Gujarat will take on Goa in Valsad.