Haris Rauf And Rashid Khan Picked Up A Hat-trick On The Same Day In The Big Bash League For The Melbourne Stars And Adelaide Strikers Respectively As Both Bowlers Gave The Fans Plenty To Cheer.

Rashid Khan, at the age of 21, has already taken three hat-tricks in the Twenty20 format. (Photo Credit: Getty Images)

Rashid Khan is one of the best Twenty20 bowlers in the world for a reason. The 21-year-old already has two hat-tricks in the Twenty20 format but on Wednesday, the Afghanistan sensation produced his third hat-trick as Adelaide Strikers gave Sydney Sixers a tough fight but it went in vain. On the same day, Haris Rauf, the upcoming Pakistan pace sensation who has enjoyed a fabulous 2019/20 Big Bash League, took the second hat-trick and cemented his reputation as one of the most promising bowlers in the world as Melbourne Stars defeated Sydney Thunder. While there was mixed fortunes for Rashid and Rauf, one cannot argue the fact that both bowlers are currently the best when it comes to the format.

In the game between Sydney Sixers and Adelaide Strikers at the Adelaide Oval, it was a proper edge-of-the-seat thriller. On a sluggish pitch, Sydney Sixers chose to bowl. Jack Weatherald was in fine form but at the other end, wickets tumbled with Philip Salt and Matthew Short falling cheaply. Weatherald and Alex Carey looked to string a solid partnership with Weatherald nearing a fifty. However, Ben Dwarshuis took his second wicket by dismissing Carey for 32 while Tom Curran got the wicket of Weatherald for 47.

From that point on, Adelaide Strikers failed to get any momentum going. Lloyd Pope, who upcoming legspinner who impressed in the Under-19 World Cup when he took the best figures in the Under-19 format, took two wickets while Curran ran through the lower order to finish with 4/22. Josh Hazlewood, who missed the Melbourne and Sydney Tests, took the wicket of Peter Siddle to finish with 1/19 as Adelaide Strikers were bowled out for 135.

It was not smooth sailing for the Sydney Sixers as they stumbled at regular intervals. Michael Neser struck twice in the third over by removing Jason Avendano and Josh Phillippe. Daniel Hughes and James Vince steadied the innings but just as they got a partnership going, Rashid removed Daniel Hughes. 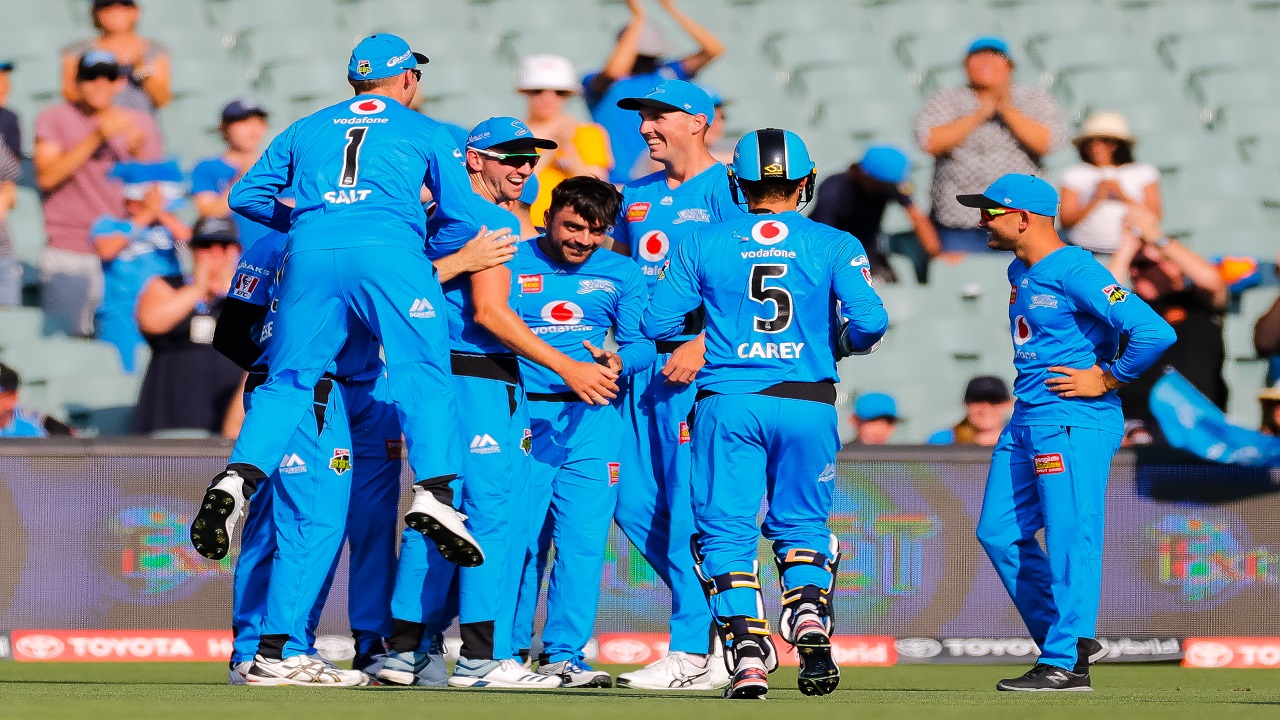 Vince struck a couple of fours but Rashid showed his magic. In the fifth ball of the 11th over, Vince poked at a legbreak and the catch was taken by Carey. In the sixth ball, Rashid flummoxed Jack Edwards with a googly. In the first ball of the 13th over, Rashid completed the hat-trick as he cleaned up Jordan Silk with a googly. When Peter Siddle sent back Dwarshius, Sydney Sixers were staring down the barrel at 99/7 in 15 overs.

Curran struck some lusty blows but once he was dismissed for 21 by Harry Conway, Sydney Sixers needed 12 runs off 12 balls with only two overs to spare. However, Hazlewood showed his mettle with the bat as he smashed three consecutive fours off Siddle to help Sydney Sixers win this thrilling contest.

As Sydney Sixers went over the line in Adelaide, their neighbours Sydney Thunder were felled by a superb performance from Haris Rauf at the Melbourne Cricket Ground. Melbourne Stars chose to bowl but Usman Khawaja and Alex Hales gave the Sydney Thunder a great start. The 56-run opening stand laid the foundation for a good score but Khawaja and Hales fell in quick succession to Nathan Coulter-Nile and Adam Zampa. In stepped Callum Ferguson and Matthew Gilkes and the duo scored aggresssively to stitch a solid 83-run partnership for the fourth wicket. 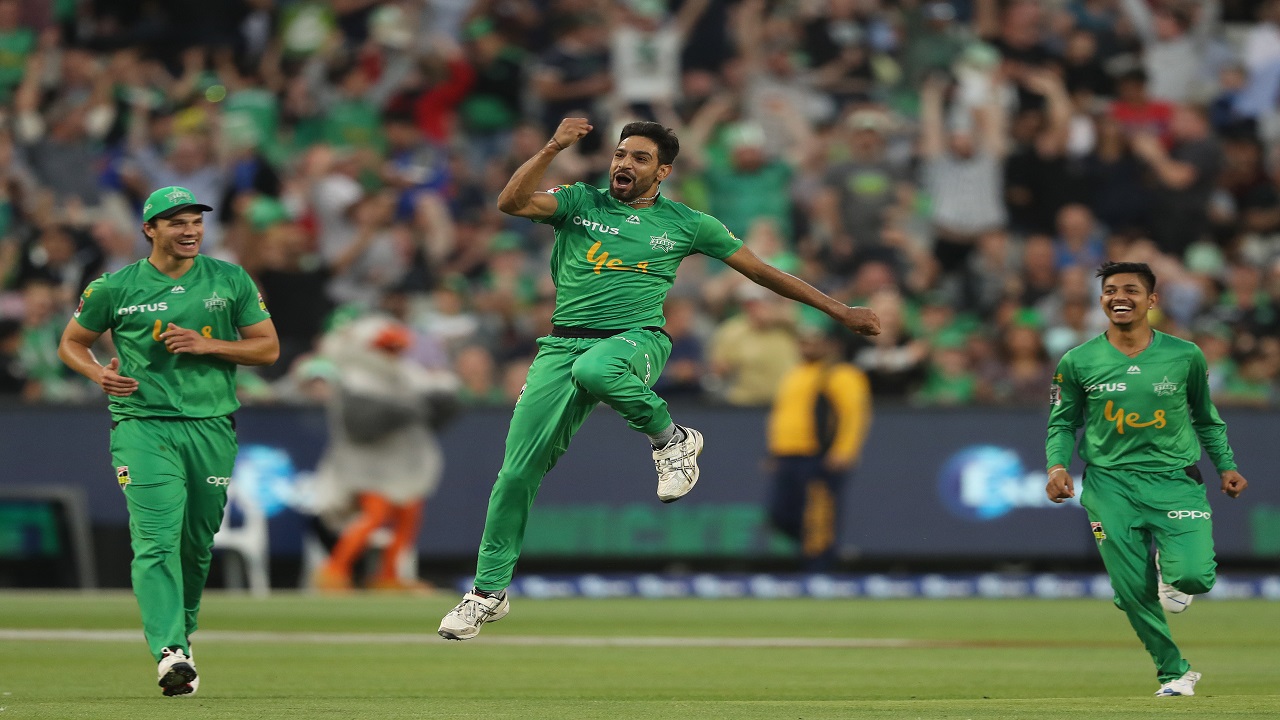 However, in stepped Rauf and he proceeded to deliver a brilliant final over. Rauf bowled a slow off-cutter and Gilkes flicked it to fine leg where Sandeep Lamichhane took the catch. The next ball was also a slower ball and Ferguson looked to scoop the delivery to fine leg but dragged it back onto the stumps. Rauf achieved the hat-trick when he trapped Daniel Sams LBW as Sydney Thunder were restricted to 145/5, with Rauf finishing with 3/23.

Nic Maddinson, Coulter-Nile and Nick Larkin fell cheaply but Marcus Stoinis continued on his merry ways with yet another fifty while Glenn Maxwell's aggressive 59 off just 37 balls helped Melbourne Stars register a six-wicket win with over two overs to spare.

The results meant that Melbourne Stars and Sydney Sixers were in the top two while Adelaide Strikers are in third position after their third consecutive loss. Sydney Thunder are in fourth position but they are under pressure from Brisbane Heat, Hobart Hurricanes and Perth Scorchers.