Virat Kohli's Indian cricket team dominated the second day at the Hagley Oval in Christchurch after a splendid performance from the bowlers. Mohammed Shami took two wickets and he was well supported by the likes of Jasprit Bumrah, Umesh Yadav and Ravindra Jadeja. Tom Latham managed to hit a fifty but he fell just on the stroke of lunch for 52 as India headed into the lunch break still armed with a lead of 100. In the second session, things got better for India and it was Ravindra Jadeja who impressed with his fielding and also with his bowling.

In the third over of the post-lunch session bowled by Jasprit Bumrah, BJ Watling, the last recognised batsman of the New Zealand team, lunged forward and drove a full but wide ball to backward point but Ravindra Jadeja was alert and he dived to his left to complete a stunning catch. As he did it in Wellington, Kyle Jamieson once again showed his mettle with the bat as he looked to keep New Zealand afloat. That was when Jadeja struck again, this time with the ball. 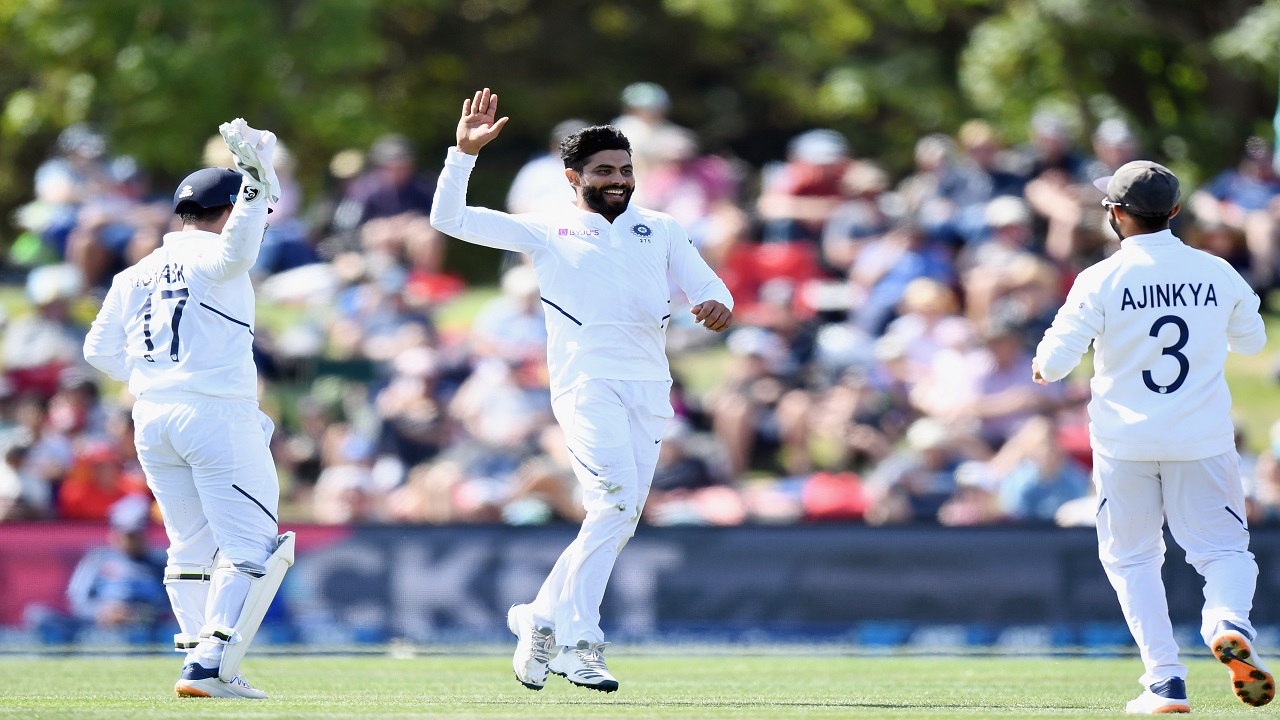 Ravindra Jadeja was in fine form on day 2 of the Hagley Oval Test against New Zealand. (Image credit: Getty Images)

Jadeja floated a flatter delivery angled in from round the wicket on middle and off stump, Colin de Grandhomme tried to defend but the ball straightened and hit the top of off stump as the New Zealand all-rounder fell for 26. This continued Jadeja's domination of de Grandhomme in the entire tour. During the Twenty20 International series, Jadeja had dismissed de Grandhomme for two ducks and here, he dismissed him in the Test to take his tally to three dismissals in 14 balls at the cost of six runs.

Jamieson was once again frustrating India and he found a good ally in Neil Wagner. Both tailenders furstrated India with boundaries and they stitched a 51-run stand. Wagner was dropped by Hanuma Vihari and he managed to overturn his dismissal with a good review. With India in danger of squandering the lead and the partnership making good progress, India needed something special and once again Jadeja stepped up. Wagner, on 21, thumped a short ball to deep backward square leg. The ball was travelling quickly and initially, it looked like Jadeja has misjudged the catch. However, he ran back, leapt high and plucked the catch with one hand. Wagner could not believe it and he had to trudge back to the pavilion.

Mohammed Shami picked up his fourth wicket as Jamieson missed a chance to score his maiden fifty but India's turnaround in the session was because of Jadeja. Speaking at the interval, Jadeja said, "I was expecting him (Wagner) to score towards deep square leg. But I didn't expect the ball to come at that pace. It came so quickly with the wind and I just stuck my hand out. I didn't even realise when I took the catch." India will be looking to score some quick runs and give New Zealand a big target if they have to level the series and end their tour on the ultimate high.