Rohit Sharma And KL Rahul Blasted Centuries And They Were Aided By A Blitzy Fifty From Shreyas Iyer And Kuldeep Yadav's Second Hat-trick As India Won By 107 Runs To Level The Series 1-1.

Vizag is known as the 'City of Destiny'. Heading into the match, India had to rewrite a bit of their cricketing destiny. A loss would have seen them achieve a low not seen in 36 years. A loss would have given West Indies their first bilateral series win against India in 13 years. However, Rohit Sharma, KL Rahul and Kuldeep Yadav had other ideas. Rohit and Rahul notched up centuries, Kuldeep created history by becoming the first Indian bowler to take two hat-tricks. Add Shreyas Iyer's blazing fifty and Rishabh Pant's blitz at the end, India notched up a superb 107-run win at the ADA VDCA stadium to level the series 1-1 on Wednesday.

West Indies once again won the toss and they chose to bowl. However, unlike Chennai, Rahul and Rohit got on top of the West Indies bowling. Rohit and Rahul got going with a boundary off Sheldon Cottrell and that set the momentum. Rahul pounced on Cottrell's bowling with two more boundaries and Rahul grew in confidence with an upper-cut six off Jason Holder. Rohit played second fiddle and Rahul was in prime form at the other end. While Rohit tackled the spin off Kharry Pierre with an edge to third man, Rahul neared his fifty with a lofted six over wide long on. Rohit broke the shackles with a pulled six over long leg off Alzarri Joseph and he went past 11000 List A runs and also became the leading run-getter in ODIs in 2019.

Rahul launched Pierre for another six down the ground and notched up his fifth fifty. After reaching the landmark, there were some quiet overs but Rahul hammered two fours off Joseph and Rohit reached his landmark soon with a pull to deep square leg. The runs kept flowing in the middle overs with Rahul and Rohit regularly finding the boundary. On 70, Rohit received a life when he miscued a lofted shot off Roston Chase but Shimron Hetmyer dropped the catch straight down the ground. Rohit almost caught up with Rahul by hammering Joseph down the ground.

Rahul entered the 90s but Rohit blazed past him with a six and a four off Pierre as the death overs approached. Rohit was the first to reach the landmark as he tapped Holder to the leg side for a single and the standing ovation that he got summed up his contribution. Rahul lingered in the 90s for a little while but he notched up his landmark in fine fashion by glancing Alzarri Joseph to the fine leg fence as Rohit cut loose at the other end. Rahul was soon dismissed for 102 as he miscued an upper-cut to third man.

Carnage Towards The End

Virat Kohli had a great platform to push India towards a massive score but he ended up miscuing a slow, short ball from Kieron Pollard to be dismissed for a golden duck. Last year, Kohli had become the fastest to 10,000 ODI runs by hitting a ton against the same opponents but in 2019, cricket had hit back and the game proved to be a great leveler. Rohit was in the zone and looked set for a fourth double ton as he found the boundary at will. Rohit zoomed past 150 but on 159, he drove a full ball from Cottrell to be caught by the keeper. However, the carnage did not end there. 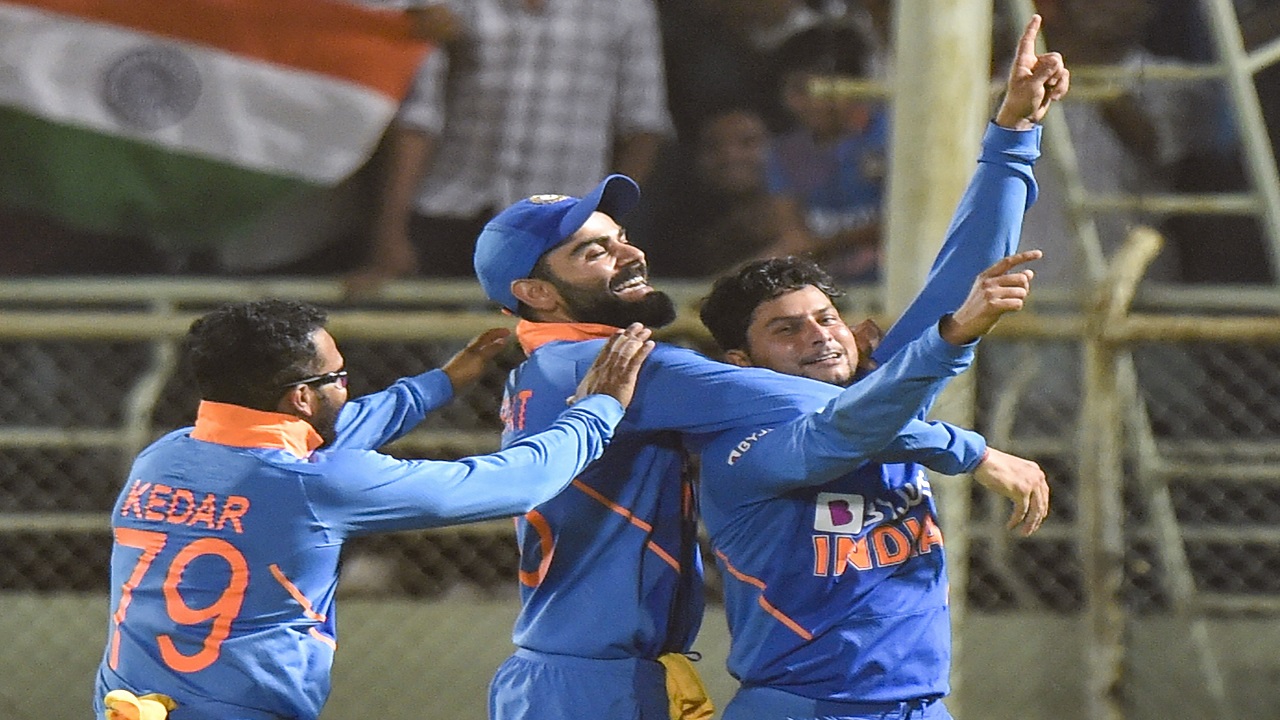 Rishabh Pant, boosted by the knock at Chepauk, blasted two sixes off Alzarri Joseph and he decimated Cottrell with three fours and two sixes as 24 runs came off the over. The next over was no different. Iyer blasted four sixes and a four off Roston Chase as India blasted 68 runs in three overs. Pant fell for a blazing 39 off 16 balls while Iyer notched up his sixth fifty. Some hits by Kedar Jadhav helped India to 387/5, which meant West Indies had to pull off the second-biggest chase in ODIs to win.

Evin Lewis and Shai Hope started positively for West Indies as they maintained a healthy rate of scoring. Hope smashed two boundaries off Deepak Chahar. West Indies laid a solid platform but Shardul Thakur sent back Lewis thanks to a good catch by Iyer. The Mumbai batsman was in the thick of things in the field as a brilliant diving stop and a good throw resulted in previous match centurion Shimron Hetmyer's run-out for 4. When Roston Chase was cleaned up by a brilliant delivery from Ravindra Jadeja that spun across, West Indies were against it. It was at that time when Nicholas Pooran and Hope decided to go after the bowling. Pooran smashed six sixes in five overs and he benefited from a dropped catch by Deepak Chahar off Jadeja.

Hope also notched up his 15th fifty and both players scored mostly in boundaries. Amidst all this, India lost a review and it seemed West Indies would continue the fight. West Indies scored 92 runs in eight overs and India were running out of ideas. In stepped Mohammed Shami and he tilted the balance in favour of India. He got rid of Pooran for 75 with a short ball and the catch was well taken by Kuldeep at long on. Next ball, he dismissed Kieron Pollard with an outswinger as both captains fell for golden ducks. In the 33rd over, the game totally changed.

Kuldeep became the first Indian bowler to take two hat-tricks in ODIs. He sent back Shai Hope for 78 when he miscued a flighted delivery to be caught at deep midwicket on the boundary by Kohli. The next ball, Jason Holder was stumped and in the next ball, he achieved history when he had Alzarri Joseph caught by Kedar Jadhav at slip. The historic achievement for Kuldeep was fitting as many believed he had lost his mojo this year. Keemo Paul and Kharry Pierre frustrated the Indian bowling with some big hits but Jadeja dismissed Pierre. Paul neared a fifty with a couple of big hits but Shami produced the yorker which ensured India would take the series into the decider at Cuttack on Sunday.