Rohit Sharma blasted 65 and hammered two sixes in the last two balls of the Super Over to give India a thrilling win in Hamilton. (Photo Credit: Getty Images)

New Zealand and Super Overs are a match made in hell. They had 'lost' the 2019 ICC Cricket World Cup final to England afetr failing to go past 15. They had suffered heartbreak in the previous five-match series against England when they lost the final T20I in Auckland in a super over. Kane Williamson had lost four out of five super overs he had featured in. In the sixth at Seddon Park, what became obvious was that when it comes to a super over, New Zealand just cannot win. Kane Williamson had played an innings out of this world, thwarting the death-overs might of Jasprit Bumrah. When he fell to Mohammed Shami for 95, New Zealand still needed 2 out of 3. Comfortable in the circumstances. Try telling it to New Zealand. Tim Seifert missed a short ball, took a bye of the next and Ross Taylor, who had hit a six at the start of the over, was bowled by a full ball. In the super over, Williamson once again got the better of Jasprit Bumrah. After two good balls, Williamson hit a six and a four and Martin Guptill ended the innings with a four as New Zealand set India a target of 18.

KL Rahul hit a boundary but the equation boiled down to 10 off 2 balls. However, Rohit Sharma was on strike. The most prolific six-hitter in the world, faced with the small boundaries at Seddon Park and with a wind aiding lofted hitting towards deep midwicket, capitalised on the moment. The fifth ball was launched over deep midwicket and with four needed off the last ball, Rohit blasted a six to long off and in the most spectacular way, India saved a match which they were destined to lose as they won the super over and took an unassailable 3-0 lead in the five-match series.

How could New Zealand squander the advantage? When Williamson came to bat on a pitch that proved to be a conundrum, the hosts were stuttering to make progress. Williamson got going with a couple of fours off Yuzvendra Chahal but he ticked into high gear when he smashed sixes off Chahal and Shami to get to his fifty. After getting to the landmark, Williamson became a boundary-hitting machine as he launched Ravindra Jadeja for two sixes and he thwarted Bumrah with three boundaries.

Williamson showed he was in the zone with the assault meted out to Bumrah, who conceded over 10 runs per over for the first time since the West Indies humdinger in Lauderdale in August 2016. When nine runs were needed off the final over and when everybody else had failed, the spectacular implosion and Rohit's divine hits in the Super Over condemned New Zealand to their first-ever series defeat against India at home.

Prior to his mind-numbing performance in the Super Over, Rohit had set-up the match brilliantly. New Zealand chose to bowl but Rohit, aided by KL Rahul's great form gave India a superb start. Rahul and Rohit regularly found the boundaries but in the sixth over bowled by Scott Kuggleijn, Rohit cut loose as he blasted three sixes and two fours as 27 runs came in the over. 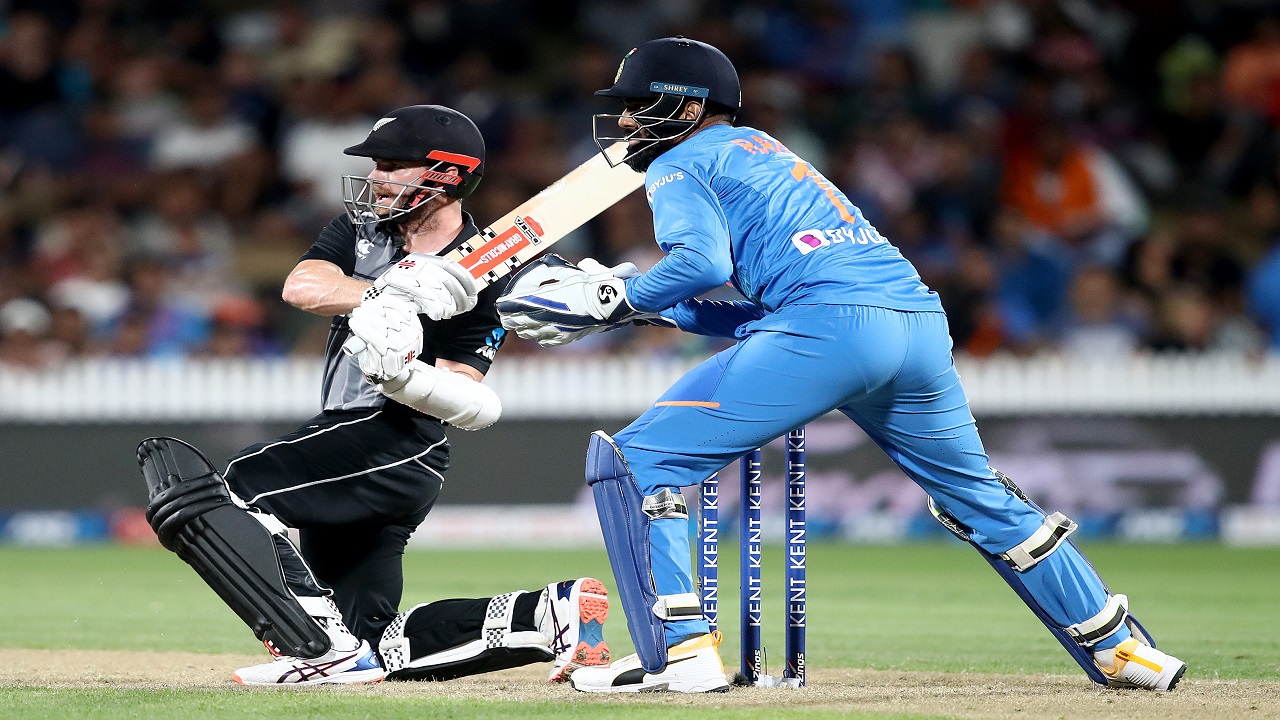 Kane Williamson slammed his 11th fifty but failed to get New Zealand over the line in Hamilton. (Image credit: Getty Images)

At 69/0 after the end of the powerplay, India were once again staring at a total in excess of 200 but mysteriously, the pitch changed its character and bowlers dominated the roost in the middle overs. Rahul looked in good touch but he ended up getting cramped for room as he cut a slow and short ball from Colin de Grandhomme to be caught for 27. Rohit fell soon after for 65 as Hamish Bennett had his revenge and when Shivam Dube struggled for 3, New Zealand had wrested the initiative.

The middle overs period, in particular from overs 9-12 saw no boundaries hit and it was Virat Kohli who broke the shackles as he glanced Ish Sodhi to the fine leg fence. Kohli came into his own as he targeted Mitchell Santner by first lofting him over long off for a six and then muscling an inside-out drive to deep extra cover for a boundary. Kohli went on to pass MS Dhoni's record of the most runs scored in Twenty20 Internationals as skipper and when Shreyas Iyer hit a six off Santner, India were once again on the right path.

However, when Santner had Iyer stumped and when Bennett got rid of Kohli for 38, India had managed just 92 runs ever since the end of the powerplay. However, Manish Pandey and Ravindra Jadeja slammed two sixes in the final over from Southee as India reached 179/6. The final over blitz was perhaps in hindsight, an indication that Southee should not have bowled the super over. However, in the last one year, New Zealand have found ways to lose matches in a heart-breaking fashion. The Hamilton loss is another chapter in this sorry saga.