Mohammed Shami's Last Over, Not My Two Sixes Won The Game - Rohit Sharma After Epic Knock

Mohammed Shami Bowled A Brilliant Last Over In Which He Got The Wicket Of Kane Williamson For 95 And Bowled Ross Taylor Off The Last Ball To Force A Super Over Which Was Won By India Thanks To Two Sixes In The Last Two Balls By Rohit Sharma.

Mohammed Shami bowled a brilliant last over as the Hamilton T20I went into the Super Over which was won by India. (Photo Credit: Getty Images)

Kane Williamson had played a knock which defied logic as New Zealand looked set to keep the series alive. He blasted sixes off Yuzvendra Chahal and Ravindra Jadeja while he thwarted Jasprit Bumrah, the world's best death bowler with three boundaries. Williamson raced to 95 and New Zealand needed nine runs off the last over to be bowled by Mohammed Shami. Ross Taylor hit a six and then took a single as the equation boiled down to two runs off three balls. The game was up. But, Shami had other ideas. Rather than bowling full, Shami resroted to the short ball tactic. Williamson steered a short ball to the keeper while Tim Seifert played out a dot ball. The next ball was a bye and Shami delivered the sucker punch by bowling Taylor with a full ball.

With the match going into the Super Over, New Zealand managed to smash 17 runs with Williamson once again getting the better of Bumrah. However, with 10 needed off two balls, Rohit Sharma broke New Zealand hearts by smashing two sixes in the last two balls as India won the match in the most dramatic circumstances and won a series for the first time in New Zealand. At the post-match press conference, Rohit, who won the Man of the Match award credited Shami for the win and not his knock.

Virat Kohli, the Indian cricket team skipper, admitted that he felt the match was gone from India's grasp. After the match, Kohli said that he did feel bad for Williamson and added that New Zealand deserved to win the match. 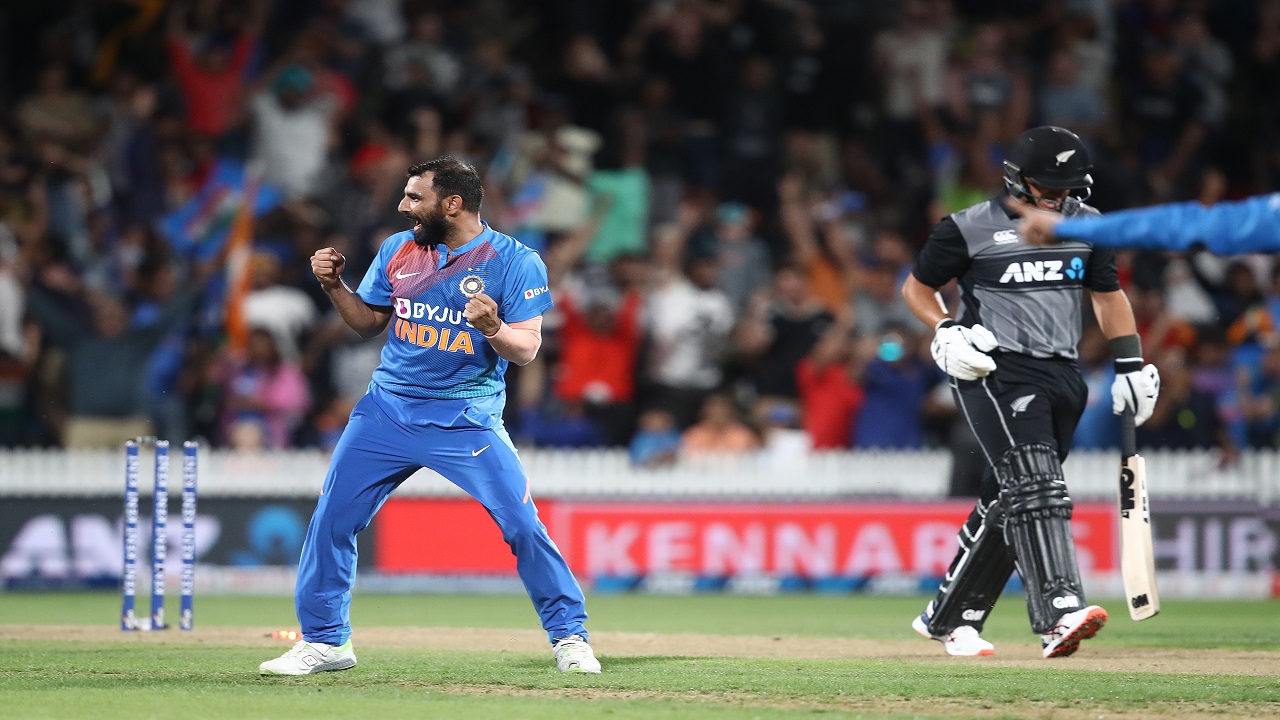 Mohammed Shami got the wickets of Kane Williamson and Ross Taylor in the final over. (Image credit: Getty Images)

"I thought we were gone at one stage. I told our coach that they deserved to win. The way Kane was batting, on 95. Feel bad for him, I know what it's like to play those knocks when things don't go your way. On the last ball, we had a discussion and we came to a conclusion that we had to hit the stumps. Because if you don't, it's a single anyway. Rohit was outstanding, both in our innings, and the last two balls as well. We knew if he got one hit, the bowler was under pressure immediately," Kohli added.

With the series now firmly in India's grasp, they will be aiming to whitewash New Zealand in the remaining two games at Westpac Stadium, Wellington and at the Bay Oval in Mount Maunganui.