Ross Taylor Strode Out For His 100th Test And Looked Good For A Big Score But He Was Dismissed For An Aggressive 44 To Put New Zealand On Top Against India At The Basin Reserve.

Ross Taylor strode out to the middle of the Basin Reserve after Tom Blundell was cleaned up by an in-cutter from Ishant Sharma. The crowd at the stadium gave him a standing ovation, not as long as the one Brendon McCullum got in 2014 when he became the first New Zealand player to hit a triple ton in Tests but it was long enough to acknowledge his legendary status. Ross Taylor had created history when he became the first player to play 100 or more games in all three formats and so far, everything was going well for New Zealand. Kyle Jamieson and Tim Southee took four wickets as India were bundled out for 165.

In response, Tom Latham and Blundell gave New Zealand a solid start before Ishant nipped them out. Ross Taylor signalled his confident intent by launching Ravichandran Ashwin into the grassbanks at deep midwicket but he reverted to caution as his attempted upper-cut to a short and wide ball from Ishant ballooned to fine leg for a streaky boundary. Before the tea break, Taylor showed his class by driving Jasprit Bumrah to the deep extra cover fence.

Following the interval, Taylor grew in confidence by lap sweeping Ashwin to the fine leg boundary. Taylor then glanced Mohammed Shami for a boundary and then caressed a drive to the deep extra cover fence. The right-hander then entered the 40s in streaky fashion when he inside-edged a short ball from Bumrah which just missed the stumps. It looked like luck was favouring Taylor and he looked good for a good score but on 44, Ishant got a short delivery to leap off the deck sharply and Taylor could only fend it to Pujara at slip.

Taylor might have missed out on a century or a fifty in his 100th Test but he still created a record. Taylor's score became the highest by a New Zealand player in their 100th Test. Stephen Fleming, the former skipper, managed just 0 and 4 against South Africa in the Centurion Test in 2006 while Daniel Vettori hit 41 against India in the Ahmedabad Test in 2010, more known for Kane Williamson hitting a century on Test debut. 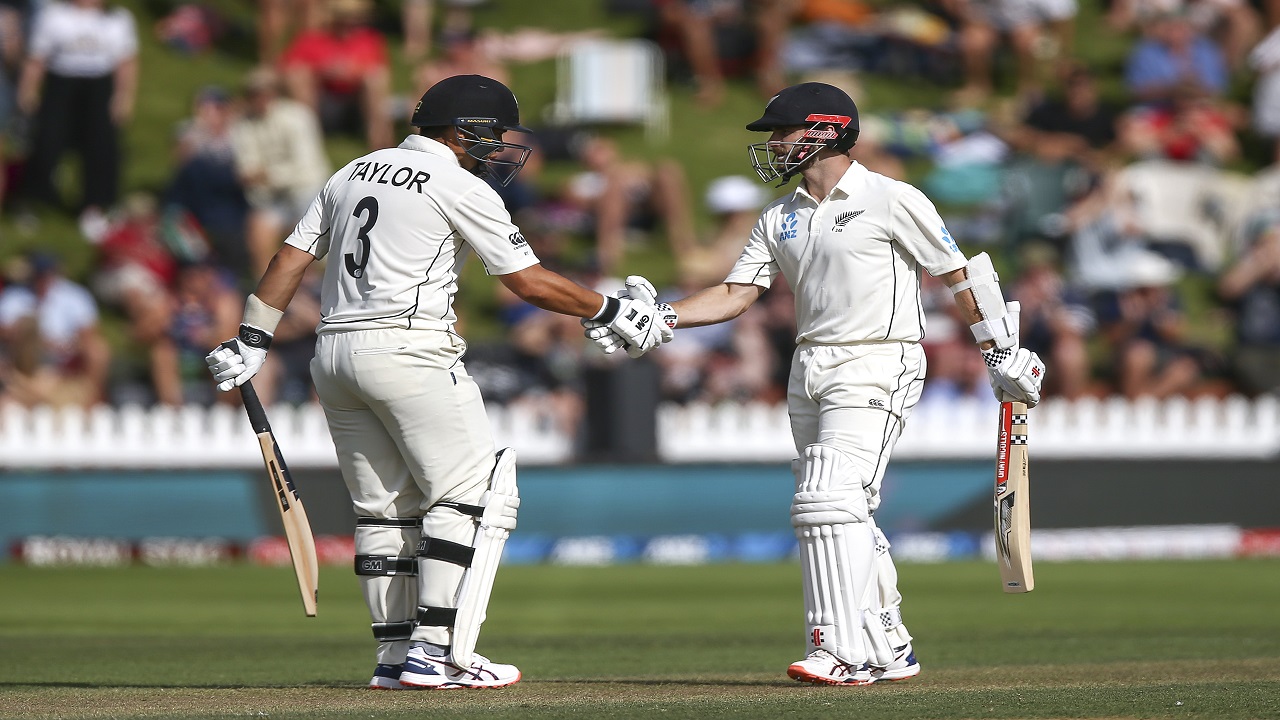 Brendon McCullum played his 100th Test against Australia in Wellington in 2016 but he was dismissed for 0 and 10. To mark the occasion of playing his 100th Test, Taylor walked out for the New Zealand national anthem with his two kids Mackenzie Taylor and Jonty Taylor. There was no sign of his third kid, Adelaide Taylor. The moment was poignant and it was captured beautifully.

Ross Taylor is the leading run-getter in both ODIs and Tests with 8570 runs and 7174 runs respectively. Taylor is the leading century-hitter in ODIs while he is second behind current skipper Kane Williamson. "Really excited about the occasion. It's very nice for the team and the family to experience something they might never do again. I'll need some help drinking (the hundred bottles of wine), but they can be stored for a while. It keeps the tradition from Fleming, Brendon (McCullum) and Dan (Daniel Vettori) who all played over a hundred Tests each and hopefully we can celebrate this one with a win," Taylor said.