Virat Kohli's Indian Cricket Team Failed To Defend 348 In The First ODI Against New Zealand At Seddon Park In Hamilton And The Key Reason Was The Bowlers Conceding 118 Runs From Overs 32-41 Which Changed The Entire Momentum Of The Match.

Ross Taylor and Tom Latham blasted 118 runs in nine overs at a run-rate of 13.1 as New Zealand turned the game against India in Hamilton. (Photo Credit: Getty Images)

Virat Kohli's Indian cricket team headed into the ODI series high on confidence after whitewashing New Zealand 5-0 in the Twenty20 International series. The batsmen were in form, the bowlers had also produced some remarkable performances while the fielding was also good. At the start of the first ODI in Seddon Park in Hamilton, it looked like the Twenty20 International dominance would extend to the ODIs. Virat Kohli hit a fifty but Shreyas Iyer notched up his maiden century and aided by a unbeaten 64-ball blitz of 88 from KL Rahul helped India end on 347/4. Henry Nicholls and Martin Guptill started confidently but India fought back with a couple of wickets. Nicholls reached a fifty and shared an aggressive stand with Ross Taylor, who got a life on 11 as he miscued a slog sweep off Ravindra Jadeja only for Kuldeep Yadav to drop the catch. Nicholls looked to make a match out of it but when he was run-out for 78 due to a brilliant bit of work from Virat Kohli, New Zealand were staring down the barrel at 178/3 after 31 overs.

Needing 170 from 114 balls, it looked like the game was up for New Zealand. However, Taylor along with skipper Tom Latham proceeded to change the match in a comprehensive manner with some calculated and aggressive hitting very much from the Kohli textbook of chasing. Knowing that the leg side boundary at Seddon Park had a smaller dimension than the off side, Taylor and Latham started to take the attack to the Indian bowlers.

It was Latham who started the turnaround when he swept two boundaries off Kuldeep to the deep square leg fence in the 32nd over. Although the asking rate was over nine, Taylor and Latham held firm and used the right-left combination to their advantage. Shardul Thakur bowled five good balls in the 33rd over but on the sixth ball, the bowler missed his length and Taylor mauled the ball into the grassbanks at deep midwicket. Taylor's record in Seddon Park is over 60 with three centuries and his calculated onslaught proved that he was familiar with the conditions and how to proceed in a chase in Hamilton. With New Zealand slowly capitalising on the momentum, it was Kuldeep who wilted.

Latham slogswept the bowler for a big six as Taylor reached his fifty. The finall ball was dispatched over long off as 14 runs came in the 34th over. The pressure was on India. Thakur once again bowled four good balls in the 35th over but his inability to maintain consistent line and lengths hurt him big time as Latham pummelled two boundaries in the last two balls to concede 12 runs. The onslaught resulted in some fielding mishaps. Manish Pandey missed a shy at the bowler's end and conceded four runs. However, had that hit the stumps, Latham was a goner. Taylor added more insult to injury with a boundary as Mohammed Shami leaked 13 runs in the 36th over. 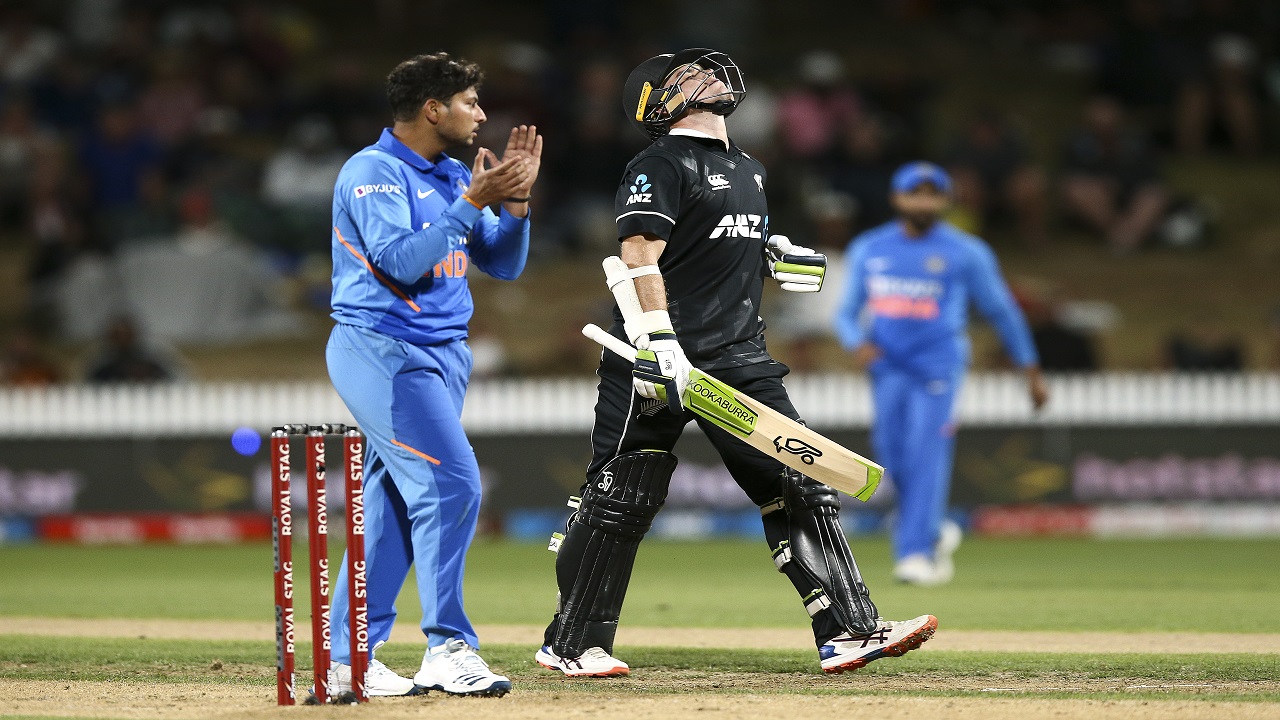 Tom Latham fell for 69 but New Zealand were boosted over the line by a brilliant century from Ross Taylor. (Image credit: Getty Images)

With only one over remaining of his spell, Ravindra Jadeja came to bowl but he was guilty of pitching too much on the leg side. Latham reverse swept him over deep backward point but Taylor blasted a four and a six as 15 runs came in the 37th over. Taylor and Latham rotated the strike and it was the right-hander who swept a boundary. However, on the last ball, Taylor attempted the reverse sweep and although KL Rahul anticipated the shot, he could not hold onto the catch as 11 runs came in the 38th over. Latham notched up his fifty by steering Jasprit Bumrah to the deep backward point fence as nine runs came in the 39th over, which was still decent.

The 40th over bowled by Thakur, though, changed the whole course of the match. Latham hit a six but Thakur bowled a no-ball. Taylor capitalised on it with a six and two fours as 22 runs came in the over. Bumrah, India's best death overs bowlers, also lost the plot when he bowled six wides and when Latham hit a four and rotated the strike, 15 runs came in the 41st over. In nine overs of carnage from the middle overs until the start of the death overs, 118 runs were scored at a run-rate of 13.

Although Latham fell for 69 in the 42nd over, the middle overs carnage and the 138-run stand off 79 balls had ensured New Zealand had sufficient buffer despite losing three wickets for 21 runs in the closing stages. Taylor hit his 21st ton and fourth in Hamilton as New Zealand finally won against India. Speaking after the game, Virat Kohli admitted that Latham's knock was the game-changer. "I think Tom's innings took the game away from us. Ross and Tom were unstoppable in the middle overs. We were decent in the field, we dropped one chance. We need to improve though. We can't think about that one chance," Kohli said.

Taylor, who won the Man of the Match, credited his familiarity with the conditions for his knock. "We were fortunate with the left-right hand combination and we were able to target the short boundary. Tom came in and took pressure off me. I told the boys that it's like sleeping in your own bed. t's been a happy hunting ground for me," Taylor said.

The middle overs onslaught is one area of concern that Kohli will have to address heading into the Auckland ODI. It must be known that India's best bowlers were carted all over Seddon Park. India will be hoping that their bowling does not suffer a similar fate in Eden Park.