Ramakant Achrekar, Who Died At The Age Of 86, Spotted The Talent Of Sachin Tendulkar At A Very Young Age.

Ramakant Achrekar’s greatest contribution to Indian cricket was spotting the talent of Sachin Tendulkar at a very young age. If it was not for Achrekar’s trained eyes, the world would not have seen the arrival of a legend that scored 18426 runs in ODIs and 15921 runs in Tests. VVS Laxman, in his tribute to Achrekar when the 86-year-old died in Mumbai, did not hesitate to say on his Twitter handle, “Thank you for unearthing a gem called Sachin Tendulkar.” When Achrekar died on January 2, Tendulkar released an emotional and touching message which said, “Cricket in heaven will be enriched with the presence of (Ramakant) Achrekar sir. Like many of his students, I learnt my ABCD of cricket under Sir’s guidance. His contribution to my life cannot be captured in words. He built the foundation that I stand on,” Tendulkar wrote.

Tendulkar arrived at the funeral and it was a touching moment for everyone to see. As Achrekar’s funeral passed, at a particular ground, there was a fitting and symbolic tribute to the man who had given Indian cricket plenty of stars. On both sides, there were a group of young boys who raised a bat in salute to the achievements of Achrekar. 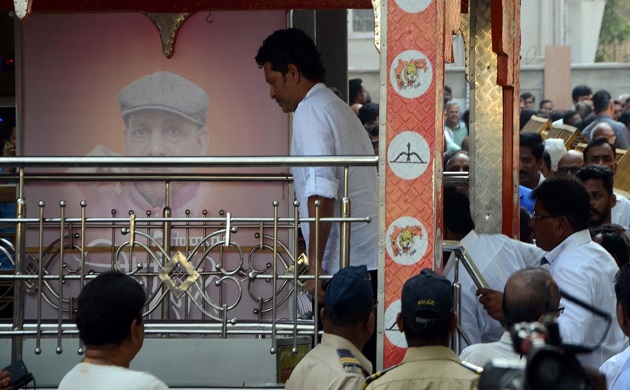 “Last month, I met Sir along with some of his students and spent some time together. We shared a laugh as we remembered the old times. Achrekar sir taught us the virtues of playing straight and living straight. Thank you for making us a part of your life and enriching us with your coaching manual. Well played Sir and may you coach more wherever you are,” Tendulkar signed off. Achrekar and Tendulkar go a long way and it was Achrekar who made Tendulkar the star that he was.

Achrekar coached prominent players like Tendulkar, Vinod Kambli, Pravin Amre and Chandrakant Pandit. In 1990, Achrekar was honoured with the Dronacharya Award for Outstanding coaches in Sports and Games. He was honoured with one of the country's highest civilian award, the Padma Shri in 2010. In the same year, he was honoured the "Lifetime Achievement" award by the Sports Illustrated by Gary Kirsten.

Achrekar belonged to that near extinct tribe of cricket coaches, who gave quintessential talented middle-class boys hope and imparted knowledge that they carried a lifetime. It is believed that Achrekar would put a one rupee coin over stumps and challenge Tendulkar not to get bowled in order to earn the coin is a part of cricketing folklore. Tendulkar still maintains that those coins are priceless. It is also reported in Mumbai cricket circles that Tendulkar once got a "tight slap" for missing a match in order to watch the senior school team play a final match. "People should come to watch you rather you clapping from the stands," Tendulkar recalled Achrekar's words in a story that has been repeated often at various functions.