Saurashtra Created History As They Won The Ranji Trophy For The First Time In Their Existence As They Drew With Bengal In The Final Of The Tournament But They Were Declared The Winners Due To A Handy 44-run Lead In The First Innings.

Jaydev Unadkat finished with 67 wickets and the Saurashtra skipper led from the front during the final against Bengal in the Ranji Trophy as they won their maiden title. (Photo Credit: Twitter)

History has been repeated in the Ranji Trophy after 83 years. In 1936/37, Saurashtra, then known as Nawanagar, beat Bengal by 226 runs in the final in Bombay Gymkhana to win the Ranji Trophy for the first time. In 2019/20, Saurashtra, under the captaincy of Jaydev Unadkat, drew with Bengal in the final at the Saurashtra Cricket Association stadium in Rajkot but they were declared the winners of the Ranji Trophy for the first time in their independent existence thanks to a 44-run lead in the first innings. For the likes of Saurashtra legends Vinoo Mankad, Sorabji Colah, Kharsan Ghavri, Jaydev Shah, Cheteshwar Pujara, Ravindra Jadeja and Sheldon Jackson, March 13 will be a golden day in the history of Saurashtra cricket as their eight-decade long wait for Ranji Trophy glory finally ended at tea on the final day of the match.

For Saurashtra, this win erases all the pain of the previous years when they lost in the final three times, twice to Mumbai and once to Vidarbha. In 2012, Saurashtra reached the final for the first time but they lost to Mumbai while in 2016, they once again came second-best to the dominant Mumbai side. In 2019, they could not overcome the doggedness of a Vidarbha side who were dominating the domestic circuit as they once again lost in the final. But, in this edition, they could not be denied a chance of creating history. In an attritional match on a deck which was labelled 'poor' by Bengal coach Arun Lal, Arpit Vasavada scored a century and he was well backed up by Cheteshwar Pujara who slammed 66.

Fifties from Avi Barot and Vishvaraj Jadeja helped Saurashtra end on 425 all out. In response, Bengal responded by grinding the Saurashtra bowlers for two days. Sudip Chatterjee led the batting charts with 81 while Wriddhiman Saha was in fine form with 64. With the result now a foregone conclusion, both teams were eyeing for a first innings lead that would give them the title. The only hurdle between Saurashtra and their maiden Ranji Trophy title was one player. He had scored a century in the quarterfinal and semi-final. Yet again, in the final, he had given Bengal a position of strength with a fifty.

'Ball Of The Season'

Anustup Majumdar was the lone factor in Saurashtra and a Ranji Trophy title. His fifty and his partnership of 98 with Arnab Nandi had put Bengal in a tremendous position to take the lead. Then came the ball of the season, as described by Unadkat during the fourth over of the final day. Unadkat bowled a full length ball that slanted back in sharply and Majumdar played down the wrong line to be trapped plumb in front. Majumdar tried the review but it was of no use and Saurshtra's confidence, that seemed to have dipped with the partnership, suddenly rose and they ran through the tail. Akash Deep's lack of alertness resulted in a horrible run-out and Nandi was stranded at the other end. 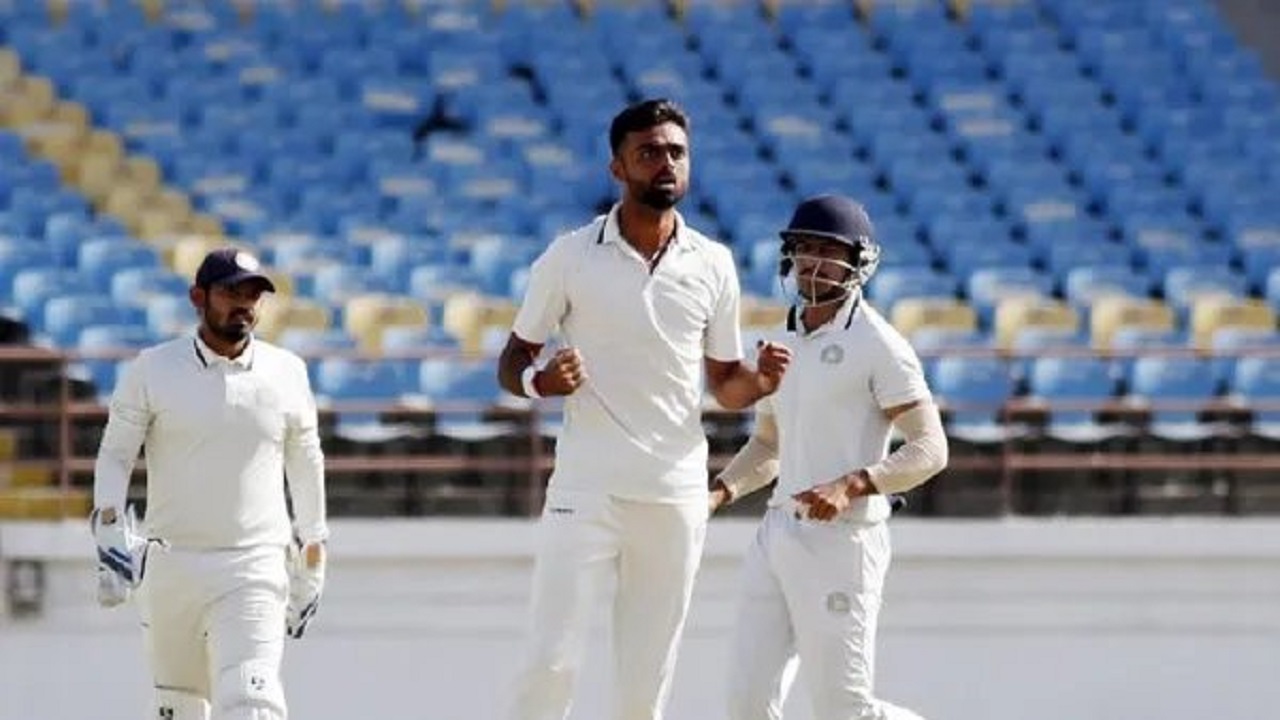 Jaydev Unadkat finished the season with 67 wickets, including the title-deciding scalp of Anustup Majumdar in the final. (Image credit: Twitter)

Mukesh Kumar fell to Dharmendrasinh Jadeja and fittingly, Unadkat took the final wicket to finish with 67 wickets in the season as Saurashtra took the 44-run lead. When the final wicket fell, the Saurashtra players went mad with jubilation as they realised that they had created history. Barring a collapse, the title was theirs. Avi Barot and Harvik Desai stitched a solid stand but Shahbaz Ahmed gave Saurashtra some jitters with two wickets of Desai and first innings centurion Vasavada. In that period, Unadkat went over to the Bengal dressing room to offer a draw and when Barot fell in the last ball before tea, the match was drawn and Saurashtra were the Ranji Trophy champions.

Also Read | India Vs South Africa ODI In Dharamshala Abandoned, Lucknow Game To Be Played In Front Of Empty Stands

Speaking after winning the title, Unadkat said, "I still remember my words (last year) and I remember telling you that the brand of cricket we are playing will continue for a few more years and we will win the title sooner than later. I kept telling to myself that one good ball today would be the ball of the season. That delivery to Anustup I feel was the ball of the season." Cheteshwar Pujara, who battled dehydration and back spasms, said playing cricket with the same core group for years was starting to pay off. "At the start of the season, we believed that we could win. Last season, we lost in the final, we had a chat after that and credit goes to the boys. The best thing about this team is most of them have played cricket together for a long time," Pujara said.