Shimron Hetmyer Slammed His Fifth Century And Shai Hope Also Notched Up A Crucial Century As West Indies Stormed Home To An Eight-wicket Win Against India In The First ODI At The MA Chidambaram Stadium.

Shimron Hetmyer and Shai Hope were the two batsmen who had made a mark in the previous series in India. Hetmyer pulled off a dazzling display of power hitting while Hope made every effort to carry the team over the finish line. Both batsmen were once again their elements in the Chennai ODI. Hetmyer's power-hitting resulted in his fifth ton, Hope had a strike rate of just over 60 but hit his eighth century as well. They were also aided by dropped catches by Rohit Sharma and crucially Shreyas Iyer as their 218-run stand helped West Indies storm home to an eight-wicket win with 13 balls to spare at the MA Chidambaram stadium on Sunday.

Hetmyer joined Hope at the crease when Deepak Chahar had trapped Sunil Ambris LBW for 9. Hetmyer started off with a bang as he smashed two boundaries off Mohammed Shami, one through backward point and a streaky top-edge over third man. Hetmyer took full toll of Shivam Dube but he put Kedar Jadhav off his line by hammering him for two fours as West Indies built a partnership. The youngster showed his intent by clubbing Kuldeep Yadav for a big six as he notched up his fifty off 50 balls.

At the other end, Hope was consuming plenty of deliveries but had made his intention to stay on till the end as he gave Hetmyer good company. After reaching his landmark, Hetmyer thumped two massive sixes off Ravindra Jadeja as the partnership went past 100. The left-hander continued to target Dube and Jadeja as he found the boundary on a regular basis. He entered the 90s with a pulled six off Shami which sailed into the deep midwicket stand. There was a moment of big concern for the West Indies when Hetmyer was laid low with cramps and he required excessive treatment to get him going.

After three minutes, Hetmyer resumed batting and he notched up his landmark in style. The left-hander missed a chance to notch up his landmark as he thumped a wide ball off a Ravindra Jadeja no-ball to the extra cover region for a dot ball. However, Hetmyer got the landmark in the very next over bowled by Kuldeep as he drove a flighted delivery to long on to reach his ton off just 85 balls. India did not make things easy for themselves as Shreyas Iyer dropped a simple catch off Hetmyer at long on off Jadeja. Hetmyer punished India and continued to flay the bowling, including lofting two massive sixes off Jadeja.

One, a 102-meter six that went out of Chepauk. After drilling Shami through extra cover for a blazing boundary, West Indies needed less than a run-a-ball. The 218-run stand was broken when Hetmyer miscued a pull off Shami to be caught at deep midwicket. However, all hopes of a fightback were extinguished as Hope dragged the match deep and exposed India's inexperienced bowlers to death bowling. Hope reached his landmark with a six and a four off Chahar as he notched up his eighth fifty and Pooran ended the chase in style with two fours as West Indies chased down what was a decent total. 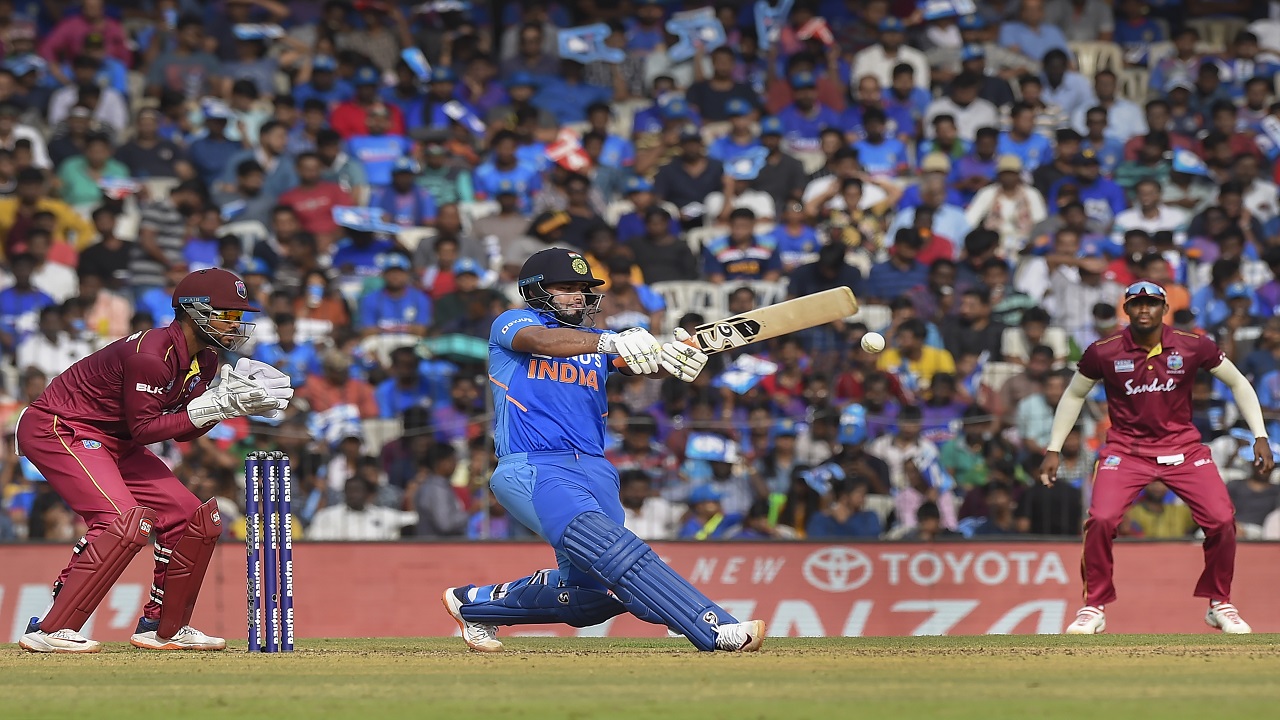 Rishabh Pant silenced his critics with an aggressive 71, his maiden fifty in ODIs. (Image credit: PTI)

Earlier, West Indies chose to bowl against India and Kieron Pollard read the conditions well with Sheldon Cottrell bowling two maiden overs. Holder and Cottrell did not allow the Indians to get going and run-scoring became difficult. KL Rahul got a leading edge to a slow and short delivery off Cottrell to be caught at midwicket. Virat Kohli started well but two balls later, he dragged a slow off-cutter from Cottrell back onto the stumps to fall for 4. Rohit struggled to get going but he managed to string a partnership with Shreyas Iyer. However, on 36, he miscued a short ball from Alzarri Joseph to be caught at midwicket. In stepped Rishabh Pant into the cauldron of Chepauk.

The MA Chidambaram stadium is the fortress of MS Dhoni and he would have felt the pressure. However, Pant stepped up to the challenge and he showed his toughness by rotating the strike and finding the boundary with ease. Pant showed his intentions by slamming Roston Chase for a slog swept six over deep midwicket and Iyer also followed suit by hoicking the offspinner for a six over wide long on. West Indies slackened in their fielding in the middle overs and they did not help themselves when Cottrell dropped Pant off Pollard's bowling. Iyer notched up his fifth fifty and Pant silenced his detractors for the time-being with his maiden fifty. However, as the death overs approached, both Iyer and Pant fell in quick succession.

Pant attempted a slog to deep midwicket but fell to Pollard for 71 while Iyer mistimed a short ball to be dismissed for 70. Kedar Jadhav and Ravindra Jadeja tried to make progress and they pushed India past 250. However, West Indies bowled with discipline in the death overs and they got Jadhav for 40 while Jadeja was run-out in bizarre circumstances. Still, 287/8 on a sluggish Chepauk wicket was a formidable score but Hetmyer and Hope ensured that West Indies would not be cowed down.