Smriti Mandhana Smashed 66 And Had Put India On Course For A Famous Win But Her Dismissal Resulted In A Collapse Of Seven For 29 With Jess Jonassen Taking Five Wickets As Australia Won By 11 Runs To Clinch The Women's Twenty20 International Tri-series.

Smriti Mandhana was blazing away and taking the attack to the Australian bowlers in the Women's Twenty20 International tri-series final at the Junction Oval in Melbourne. Mandhana had blasted 27 runs in two overs and at 115/3 in 14.1 overs, needing 41 off 35 balls, India were on course to defeat Australia and achieve history. However, the 'big tournament syndrome' caught up with the Indian cricket team. Megan Schutt sent back Mandhana for 66 and what followed was an epic collapse. Jess Jonassen took 5/12 and India lost seven wickets for 29 runs as Australia clinched the Women's Twenty20 International tri-series title with a 11-run win.

It was once again a case of so near yet so far for India as they lost the key moments in the final. India's bowlers had seemed to restrict Australia to a score of under 150 that would have given them plenty of confidence but Beth Mooney and Rachel Haynes smashed three fours and a six in the final over as 19 runs came in the 20th over bowled by Rajeshwari Gayakwad. The inability of the middle order to capitalise on the platform laid by Smriti Mandhana proved to be crucial and Jonassen's wickets of skipper Harmanpreet Kaur and Arundhati Reddy in the 16th over killed the contest.

In final which witnessed fluctuating fortunes on a regular basis, Australia elected to bat but Alyssa Healy's woes continued as she was dismissed in the first over by Deepti Sharma for 4. Ashleigh Gardner signalled her intent with two fours off Shikha Pandey while Beth Mooney focused on guiding Australia through the innings. Mooney also showed her aggression, smashing two fours off Deepti Sharma. Mooney and Gardner kept the scoreboard ticking but just as they were building a partnership, Arundhati Reddy sent back Gardner for 26. 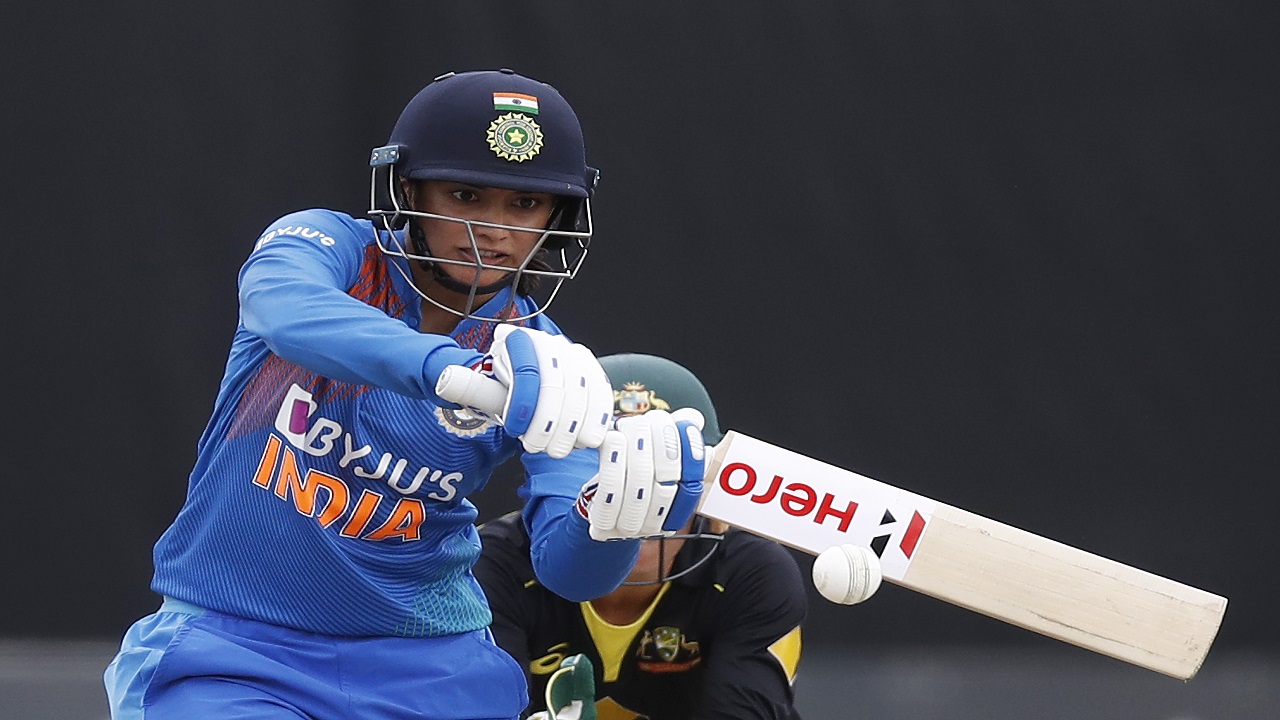 Smriti Mandhana smashed 66 in the final but Australia held their nerve to beat India by 11 runs in the final. (Image credit: Getty Images)

Meg Lanning got going with a six off Reddy and she maintained a brisk rate of scoring. However, just when Lanning was looking good, Radha Yadav got her for 26. Ellyse Perry fell cheaply for 1 while Mooney notched up her fifty. Australia looked to be losing momentum as the innings ended but the assault in the final over saw them reach a psychologically good score in excess of 150.

India blazed away at the start with the young Shafali Verma smashing a four and six off Perry in the first over but she fell to Tayla Vlaeminck in the quest for big runs. Mandhana, who has been in fine form in the tournament, got going with a boundary off Schutt and followed it up with two more fours off Vlaeminck. Richa Ghosh gave Mandhana good company with two fours off Nicola Carey.

Just as a partnership was developing, Annabelle Sutherland got rid of Ghosh for 17 and India suffered a further jolt when Jemimah Rodrigues fell cheaply to Vlaeminck. Mandhana, though, raised her aggression even further as she blasted three fours off Vlaeminck to notch up a brilliant fifty. She continued to target the Australian bowlers by hitting two more boundaries off Sutherland and skipper Harmanpreet also looked good with a four. Australia did themselves no favours as Gardner conceded a four and five wides as India closed in.

However, in the second ball of the 15th over, the game turned decisively in Australia's favour as Schutt sent back Mandhana for 66. Jonassen trapped Harmanpreet LBW and Reddy was caught by Healy as Australia turned the screws. Perry sent back Shikha Pandey and Jonassen got rid of Radha Yadav. Taniya Bhatia kept the contest interesting with two fours off Schutt but Jonassen took two wickets in the final over and India once again suffered heartbreak at the hands of Australia.