Steve Smith Smashed His Ninth Century And In The Process, He Went Past 4000 Runs In ODIs In Just His 106th Innings As Australia Eyed A Big Score In The Deciding Game In Bangalore.

Steve Smith notched up his ninth century in ODIs but it was his first in this format after three years. (Photo Credit: IANS)

Steve Smith established his reputation as one of the supreme run-making machines in the modern era as he notched up his ninth century to put Australia in a great position against India in the deciding ODI at the M Chinnaswamy stadium in Bangalore on Sunday. During the course of his knock, Smith went past 4000 ODI runs and he notched up the landmark by glancing Navdeep Saini to the fine leg boundary. Smith notched up his 4000 runs in his 106th ODI innings and it made him the joint-fourth fastest Australian player to reach this landmark. David Warner holds the record for Australia, having notched up the landmark in 93 innings. Smith tied with Geoff Marsh but he got it four innings slower than Dean Jones, who took 102 innings to notch up his 4000 ODI runs. Aaron Finch is third on the list, having taken 105 innings to reach 4000 runs

Smith was unlucky to have missed out on a century in Rajkot after he edged a legbreak from Kuldeep Yadav back onto his stumps to fall for 98. His dismissal put Australia on the backfoot and they lost the match by 36 runs as India levelled the series. However, in Bangalore, there was no problem for Smith as he made amends for his mistake earlier in the innings when Australia won the toss and chose to bat on a dry pitch at the M Chinnaswamy stadium.

After losing David Warner for 3 to Mohammed Shami, Smith got going with a pull shot past Saini at short fine leg as India planned to target him with the short ball. Smith continued to negotiate the pacers on a sluggish deck as Finch looked to get going. However, in the ninth over, there was catastrophe. Smith pushed a length ball from Shami to backward point and started off for the single. Finch responded and he hared down the track. However, Smith turned him back and Finch was stranded half-way. He turned but Iyer relayed the throw back to the bowler who got the Australian skipper.

Smith Makes It Up

After getting Finch run-out, Smith decided to up the ante and he tackled Kuldeep and Ravindra Jadeja well. Smith also targeted Saini with two fours while Marnus Labuschagne gave him great company. Smith and Labuschagne found the boundary regularly as the partnership grew. Smith neared his fifty with a four off Jadeja and he notched up his fifty by targeting Saini. Smith and Labuschagne continued to bat brilliantly and they notched up the 100-run partnership in quick time. 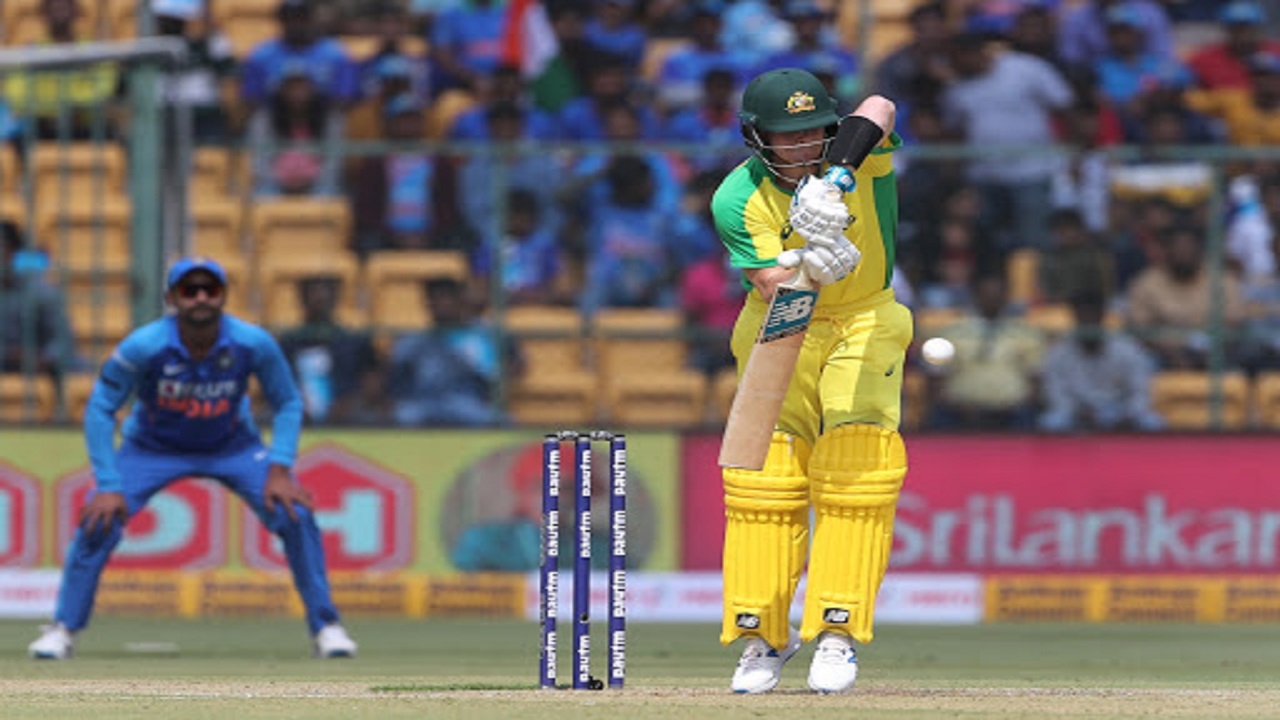 Labuschagne had missed his fifty in Rajkot but he made no mistakes in Bangalore as he notched up  his maiden fifty but as soon as he reached the landmark, he fell to Jadeja yet again thanks to a splendid diving catch by Virat Kohli at extra cover. Despite losing Mitchell Starc in the same over, Alex Carey started off aggressively with boundaries and Smith neared his ton by dispatching Kuldeep to the boundary.

Smith went past 4000 runs by glancing Saini to fine leg and after spending some time on 98 and 99, Smith reached his landmark by carving Saini to deep point to reach his milestone.