Kyle Jamieson And Tim Southee Picked Up Four Wickets Apiece As India Were Bowled Out For 165 And New Zealand, In Response, Headed Into The Lunch Break At 17/0.

Tim Southee was aided by Kyle Jamieson as both pacers took four wickets apiece to bowl India out for 165. (Photo Credit: Getty Images)

Kyle Jamieson (4/39) and Tim Southee (4/49) were the stars on day 2 of the Wellington Test at the Basin Reserve as they picked up four wickets apiece to bowl India out for a disappointing 165. At lunch, New Zealand had reached 17/0 with Tom Latham and Tom Blundell holding firm. India were always on the backfoot at the start of day 2 after a rain-curtailed first day which saw the top order being dismantled by the seam and bounce of Kyle Jamieson, who picked up the wickets of Virat Kohli, Cheteshwar Pujara and Hanuma Vihari on debut. All hopes rested on Rishabh Pant and Ajinkya Rahane but both of them failed to deliver. Pant started the day with a bang as he mauled a big six off left-arm spinner Ajaz Patel and it looked like India would bat confidently under sunny skies. However, they shot themselves in the foot with some careless cricket.

Disaster struck when Pant was run-out needlessly. Rahane tapped a length ball from Tim Southee to backward point and set off for the single but Pant was not interested. In the end, he had to put in the hard strides but a direct hit from Ajaz Patel sent Pant back on his way. Southee struck next ball as he cleaned up Ravichandran Ashwin with a full ball that nipped away late. Both Ishant Sharma and Rahane survived a hostile over from Trent Boult. 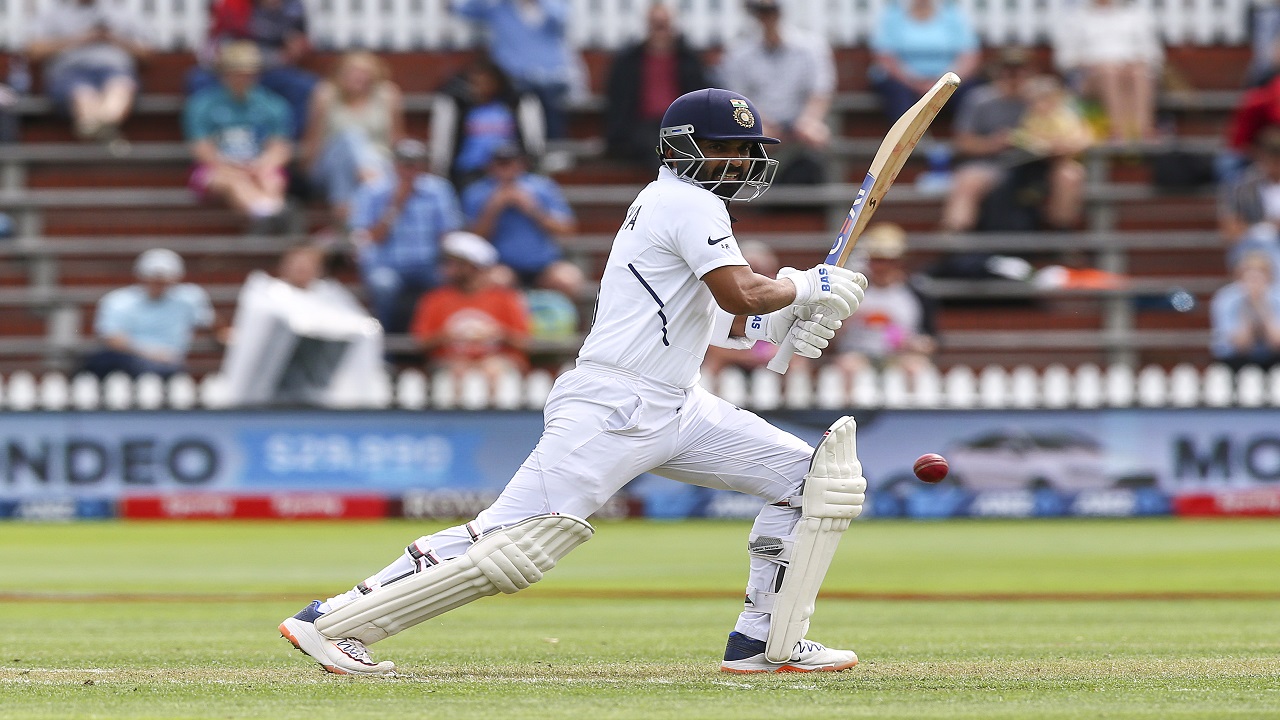 Ajinkya Rahane held firm with 46 but he could not carry on for India. (Image credit: Getty Images)

Ishant fended at a short ball and it went past leg gully. Rahane managed to get a four to deep backward point but he escaped when he top-edged the pull but it landed safely. However, Southee dealt India a body blow as he got rid of Rahane for 46. The bowler delivered a length ball from wide of the crease and got it to hold it's line outside off, a bit of extra bounce from the deck saw Rahane trying to leave the delivery but he could not do it totally and BJ Watling took the catch to send back the last recognised batsman for India.

Ishant and Mohammed Shami decided to go after the bowling as India eyed a total in excess of 200. Shami top-edged the lofted shot off Tim Southee but Kane Williamson, undone by the Basin wind, dropped a sitter at mid on. Shami continued to hit the aerial shots, with some just eluding the fielder but he managed to hit two fours off Southee. Shami's edges eluded the fielders as he raced to 21. However, Kyle Jamieson ended the fun as Ishant poked at a short delivery that climbed up outside off.

Jamieson missed his fifer as Southee finally ended Shami's aggressive knock as India were bowled out for 165. Tom Latham and Tom Blundell survived a testing spell from Jasprit Bumrah and Ishant as the bowlers found good movement from the deck. Bumrah appealed for an LBW against Blundell but Virat Kohli decided to review the decision.

Replays showed an inside edge and India did themselves no favours by losing one of their reviews immediately. Blundell managed to get a thick edge that went over the slips and at the lunch break, New Zealand had ensured they did not suffer any jolts.